Skip to content
You are here
Home > Club Rugby > Pioneers of Rugby in Wellington 022: Ernie Dodd and Eric Watkins 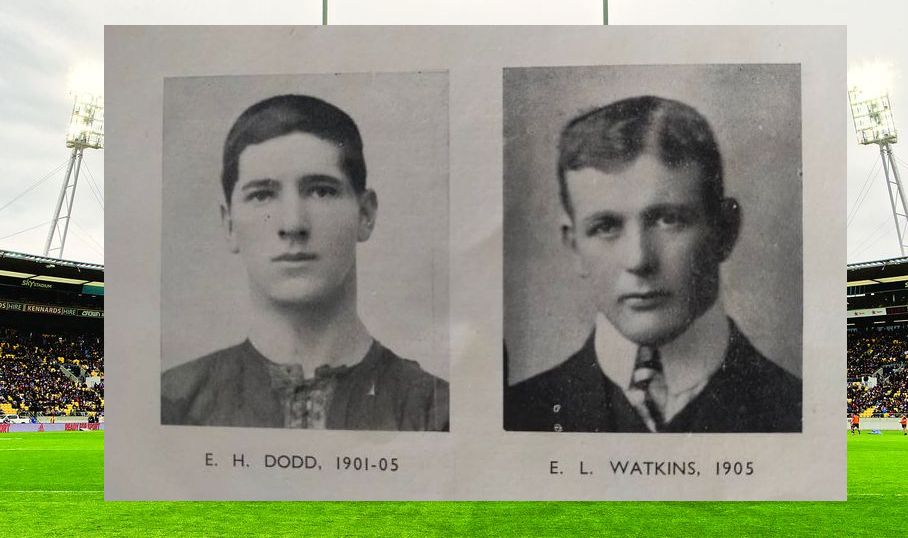 Fraser and Wilson, Jarden and Clark, Ellison and Gage – examples of memorable partnerships in Wellington Rugby.

Watkins and Dodd are also on that list, great friends and front row partners for club, province and briefly the All Blacks in the early years of the previous century.

Ernest Henry Dodd and Eric Leslie Watkins played 85 combined games for Wellington over several years, many together, and were Wellington’s dual hookers when the game in New Zealand was played using the 2-3-2 scrum formation.

Dodd and Watkins were almost tied at the hip in more ways than one.

They attended Wellington College together, no doubt coming under the wing of headmaster J.P. Firth who also became WRFU President in 1897.

In 1895 and 1896, Wellington College beat their original rivals Nelson College 20-0 and 19-0 respectively, while 1897 was a particularly successful year for Wellington College in their inter-collegiate fixtures, beating Christ’s College 13-10, Whanganui Collegiate 8-5 and local rivals St Pat’s Town 14-3.

Leaving school, Watkins and Dodd joined the newly formed Wellington College Old Boys club in 1898 – interestingly, while Dodd was listed in WCOB’s inaugural Junior grade team as a forward, presumably a hooker, Watkins was listed as the team’s fullback.

In 1899 WCOB’s Junior team won the Junior Championship, with a points for-points against record of 170 to 23. WCOB’s history states “it was in this year that the famous (E.H.) Dodd and (E.L.) Watkins partnership as front-rankers started – a partnership which was, six years later, carried to ‘All Black’ honours.”

The following year, WCOB joined the Senior Championship, with Dodd and Watkins in the team along with future All Black Hector ‘Mona’ Thomson.

Both Dodd and Watkins made the Wellington representative team for the first time in 1900, and again in 1901.

In 1901, New South Wales were the first touring team to New Zealand since Queensland in 1896. Wellington had thrashed Queensland 49-7 five years previously, and they are added another scalp in their opening tour match here. With Dodd and Watkins as hookers, Wellington beat NSW 17-16.

Two weeks later, Dodd became the club’s first All Black when he was selected as the youngest member of the team to play for New Zealand in the one-off international at Athletic Park. New Zealand won 20-3.

1904 saw WCOB finish third in the Senior Championship and Wellington make history by lifting the Ranfurly Shield for the first time on 6 August that year.

Hookers Dodd and Watkins were at the forefront of the 6-3 victory. J.K. Moloney in his Ranfurly Shield History book wrote that “the Auckland forwards dominated the Wellington vanguard in the line-out and open play, but the latter had the best of it hooking the ball.”

Over the following two weekends, Dodd and Watkins and Wellington defended the shield against Otago (14-13, after trailing 13-0) and Canterbury (6-3).

In 1905, WCOB contributed eight players to the Wellington representative team, who staved off defences by Wairarapa (3-3) and Hawke’s Bay (11-3). Both scored tries in Wellington’s earlier match that season against Wairarapa that had had seen them pull another one out of the fire, winning 15-11 after trailing 13-5 with 15 minutes to play. This game was played in a terrible conditions, with the ground a ‘quagmire.’

1905 was also the year that Dodd and Watkins played together for New Zealand, against the touring Australians.

They both missed out on making the ‘Originals’ touring team that travelled to North America and Europe, but on 29 July prior to that squad’s departure they played together in a 3-0 win for Wellington province against them. Dodd scored the game’s only try.

In August and September of that year a full Australian side toured New Zealand for the first time. Dodd and Watkins lined up against them for a Wellington-Wairarapa-Horowhenua combined combination and beat them 23-7.

Two weeks later they were selected together for New Zealand to play the only test in Dunedin. They were two of four Wellington players in the forward pack, with Melrose’s Jack Spencer the captain and Petone’s Tom Cross also in the pack.

Like the match against Wairarapa earlier in the season, the weather and conditions were appalling for this match, and it was almost postponed before being transferred from the Caledonian Ground to Tahuna Park. As they had done together on numerous times previously, Dodd and Watkins steered the ship up-front and New Zealand won the only test each of them would play, 14-3.

Dodd and Watkins’ partnership at club, Wellington land now international level was broken up at the end of 1905, with Dodd transferring to Timaru with his job with the New Zealand Shipping Company. He had represented Wellington on 45 occasions. Dodd was elected a Life Member of WCOB in 1907.

Watkins continued playing in 1906, making the North Island team again this year before leaving Wellington at the end of this year to finish with 40 representative appearances for Wellington.

Work took him north to Raetihi and he represented Whanganui in 1907, before joining the ‘All Golds’ professional tour to England in 1907/08. Although he suffered a serious training injury early in the tour and did not play in any of the matches in England. Watkins became a dual international on the homeward leg when he played in one of the first rugby league tests against Australia.

Dodd joined the New Zealand Rifle Brigade in World War One and was killed in action on 11 September 1918, just two months before the conflict ended. He was one of 13 All Blacks to perish in the Great War.

Ories and Petone stay in contention with clutch wins

Bond Banter 29 March (News in briefs, rugby information from the ground up)