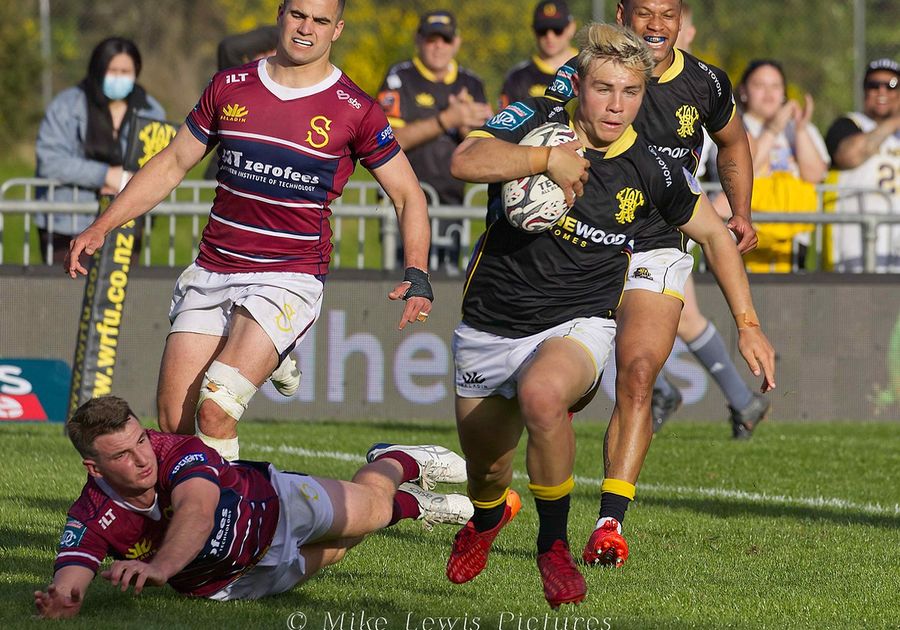 Aidan Morgan making a break for Wellington in their first-class friendly at Porirua Park last year.

Last year the Wellington Lions lost five matches in the National Provincial Championship by scores inside a converted try.

High on the heartbreak scale amongst those defeats was their second round 37-43 loss to Waikato, after leading 34-8 at halftime. Waikato went on to win the NPC, the Lions missed out on the semi-finals with too many of those losing bonus points in their column.

Another was their 32-33 loss to Bay of Plenty in Rotorua, the Lions scoring six tries but unable to kick their goals that night. They open their 2022 campaign this coming Sunday afternoon in Wellington against the BoP Steamers.

Aidan Morgan returns for his third season in Lions colours this year, having played 11 NPC matches since his debut in an opening round defeat to Waikato in 2020.

Morgan said the Lions have come together well over the past fortnight after completing Super Rugby, Māori All Blacks and club rugby seasons.

“We are building nicely together towards our first game on Sunday against BoP,” said Morgan. “We had a good hit-out and put together some good rugby together and came away with a positive win in our pre-season game against Taranaki on Saturday.”

“Letting some of those games slip last year has definitely been talked about, but this is a new group and a new year, so we are not dwelling too much on last season’s results. There are a lot of young players who have got more experienced over the past 12 months, and I think we will be up for it as a team and that will show in the way we can close out matches.”

One of those players with Super Rugby experience is Morgan himself, who debuted for the Hurricanes against Moana Pasifika in his hometown of Auckland earlier this year and went on to play 10 matches for the Hurricanes, starting the last five at first five.

“It was good to play against the Australian sides as well, and to play in the quarter-final against the Brumbies in a match that didn’t go our way but the experience of that has definitely made me a better player.”

Morgan starts the season as one of two first-fives in the squad, alongside Jackson Garden-Bachop and with Ruben Love as back-up but mostly at fullback.

“My first position is first five, I can cover fullback, but my preference is to play in the 10 jersey, “said Morgan.

All three can assume goal-kicking duties too. “We will probably have to have a bit of a shootout to see who gets the kicking duties!”

As always, there’s talent to burn in the Lions backs this year, and it could be a case of trying to fit them all into the same matchday squad if fit. The likes of Peter Umaga-Jensen, Billy Proctor, Riley Higgins, Pepesana Patafilo, Nehe Milner-Scudder, Losi Filipo, Julian Savea and Love can all ignite singularly or together.

“Plus the likes of TJ Perenara playing with us and a lot of Super Rugby experience in our backs, so hopefully we can build our connections and put together some good performances.”

Former Lion Tamati Ellison is the backs and defence coach. He might also be on the Crusaders coaching staff, but Wellington is his heart and soul.

“Tams brings a wealth of knowledge and as both a player and coach he has had a lot of success so I think he brings some really good ideas to this group. Off the back of his successful campaign with the Crusaders he brings a different perspective to the game.”

An elephant in the room in recent seasons, indeed arguably going back to the 1980s is a lack of a championship-dominating forward pack to complement the rock star backline. Supporters will have to wait and see how that unfolds this year and they could get a strong indication as soon as their second round Harry Saundercock Memorial Shield match against Canterbury in Christchurch.

Morgan moved to Wellington at the end of 2019, fresh out of helping King’s College win the coveted Auckland 1A title for the first time in 13 years and then progress as far as the Top 4 final before losing to Hastings Boys’ High School.

“Losing that game and not being able to win the Top 4 is probably one of my biggest regrets, but it’s the way it panned out on that day,” he lamented.

He has yet to play Auckland in NPC rugby, nor yet played a professional match on Eden Park (and the Lions don’t play Auckland in the round-robin this year either). But his travelling family and many friends dotted throughout the country are often in the stands supporting him wherever he plays.

He joined the Marist St Pat’s club in Wellington and has played 20 matches for MSP and scored 90 points. His only game for them this year was back in the opening round of the season against Tawa at Evans Bay Park.

“They are a great club and there’s a lot of good boys there and I really enjoy playing for them when I get the opportunity to.”

There are several other MSP players in the Lions squad, with Billy Proctor, Vince Sakaria, Tietie Tuimauga, Josh To’omaga and Keelan Whitman all counted.

Another player at MSP is Wellington Academy member Chicago Doyle, who is two years below Morgan but the pair played some First XV together including the 2019 Top 4 final.

Outside of rugby, Morgan has started a commerce degree at university, whilst himself and teammates enjoy a round of golf in their spare time.

Morgan runs out to play for MSP in this one appearance for this club at the start of this season.

Meanwhile, a second elephant in the room that also needs to be addressed in any pre-competition article about the Wellington Lions, and one perhaps joined at the trunk to the one about the forwards noted above is their title drought. It’s been 22 seasons since the Wellington Lions last won the National Provincial Championship (Division 1/Premiership) title.

Only once before in history has this barren streak been this long for Wellington/Lions sides. Following an outstanding 1930 season in which they won all their inter-provincial games and held the Ranfurly Shield and toppled Great Britain, Wellington went on a multi-season run of moderate results from 1931 to 1953 when the shield was won again. That period was also interrupted by six seasons of war.

This coming Sunday the Lions start the 2022 NPC season with a squad every bit as talented as previous years and with a group of players poised to create their own history.

Aidan Morgan is one of those players.