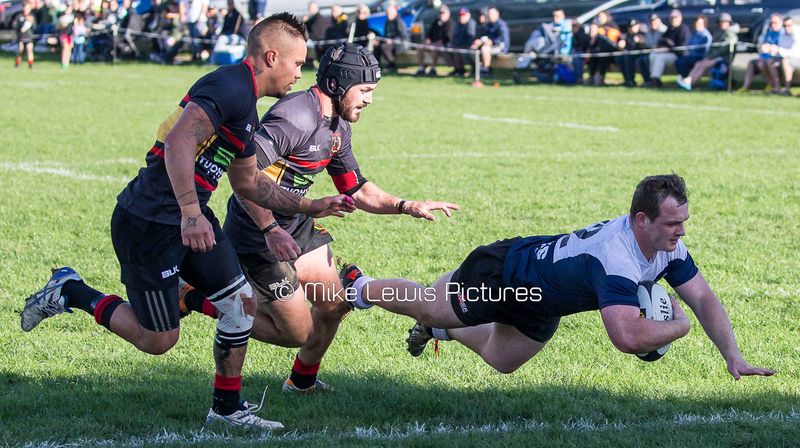 A younger Nick Grigg diving over to score for Petone against Paremata-Plimmerton in 2015. Since then he has gone on to play several seasons in Scotland and made nine international appearances for that country.

Nick Grigg played 85 Premier matches for Petone between 2011-15, during which time he was one of the most consistent midfielders in the Wellington competition. With strength in the tackle, light footwork and fast acceleration he scored and set up a bucket load of tries.

Grigglaying for Petone against Ories in one of his final appearances on the Petone Rec in the 2015 Jubilee Cup.

Unable to break through to the Wellington Lions, Grigg, aged 23 and with a Scottish grandfather, flew to Scotland, where he would eventually play six seasons for the Glasgow Warriors and play international rugby for the Scottish 7s and 15s teams.

This past Friday, many people were pleasantly surprised to see his name alongside that of several other players and the head coach with Wellington club rugby connections in the Hawke’s Bay squad list for this year’s National Provincial Championship.

How has the Hawke’s Bay gig come about for Grigg?

“I left Glasgow late last year and joined the Red Hurricanes in Osaka, but there was a company buyout and merger between two teams and I missed out on getting a second year in Japan.

“I’ve known Josh Syms [Hawke’s Bay head coach] for ages and from my time at Petone and when he was coach at Hutt Old Boys Marist and have kept in touch with him throughout my career. He heard I was coming back and asked me if I wanted to come to Hawke’s Bay and so I jumped at the chance.”

Grigg has been back in New Zealand for a couple of months (and has been following Petone, but more on that below) and has settled in Magpies territory.

He played in their recent pre-season games against Waikato and Auckland but not in their Ranfurly Shield defence against Poverty Bay this past weekend.

The Magpies open their campaign this weekend against defending Premiership champions Waikato in Hamilton before returning home to host the Counties-Manukau Steelers in week two in a shield defence.

They are scheduled to play the Wellington Lions in round seven on 17 September, which could also double as a Ranfurly Shield defence should they still hold it.

Grigg played most of his rugby for Petone as a second five but spent much of his time in the centre jersey whilst in Scotland, so is happy to fill both those roles back in New Zealand.

When he moved to Scotland he didn’t initially have a professional contract.

“I joined the academy, and I was probably the oldest player in the academy! I played club rugby for a club called Stirling County, which is where the Sir William Wallace Memorial is [think Braveheart] and the field we played on is where all the battles were fought.”

He got his big break through sevens.

“I moved into the Scottish sevens programme, and I went to the Wellington and Sydney tournaments.”

Returning home to Wellington for the 2016 international sevens tournament.

This led to his first professional deal with the Glasgow Warriors and he went on to play nine internationals for Scotland.

He made his debut against Irish side Leinster in March 2016 and whilst there helped Glasgow to reaching a pair of Heineken [Champions] Cup quarter-finals and to the Pro14 final in 2019 against Leinster at home, which the visitors won 18-15.

He enjoyed his time there. “The style there is more set-piece oriented, but we had Gregor Townshend and Dave Rennie as coaches, and both were big on fast-flowing New Zealand-style rugby, so I knew what that was about.”

“All were special but playing England home and away at Murrayfield and Twickenham were big ones and playing France at the Stade de France stadium was memorable. When you are running out and all you see is a sea of French flags in a crowd of 70-80,000 people and you can’t hear your teammate five metres away from you is pretty amazing.”

Some highlights compiled a couple of years ago playing for Glasgow.

He followed Petone throughout his time overseas and was a keen follower of their fortunes this season when they won the Swindale Shield and were beaten Jubilee Cup finalists.

“I felt for the boys, they did so well this season and won the Swindale and the McBain, so it was a bit of a shame they couldn’t win Jubilee. But it was still an amazing season.”

Away from rugby, the former Newlands College student has an architecture degree and has been doing some part-time work in that field.

Beyond this stint with Hawke’s Bay, Grigg doesn’t know what his immediate rugby future holds, but for now he just enjoying settling down in the Hawke’s Bay and noted it’s a bit quieter than Glasgow and Osaka but when the Ranfurly Shield is on display down at McLean Park the noise will pick up.

Bond Banter 30 August (the week that wasn’t in rugby)