Skip to content
You are here
Home > Club Rugby > Ories win silverware, semi-finalists found in other grades and First XV competition heats up 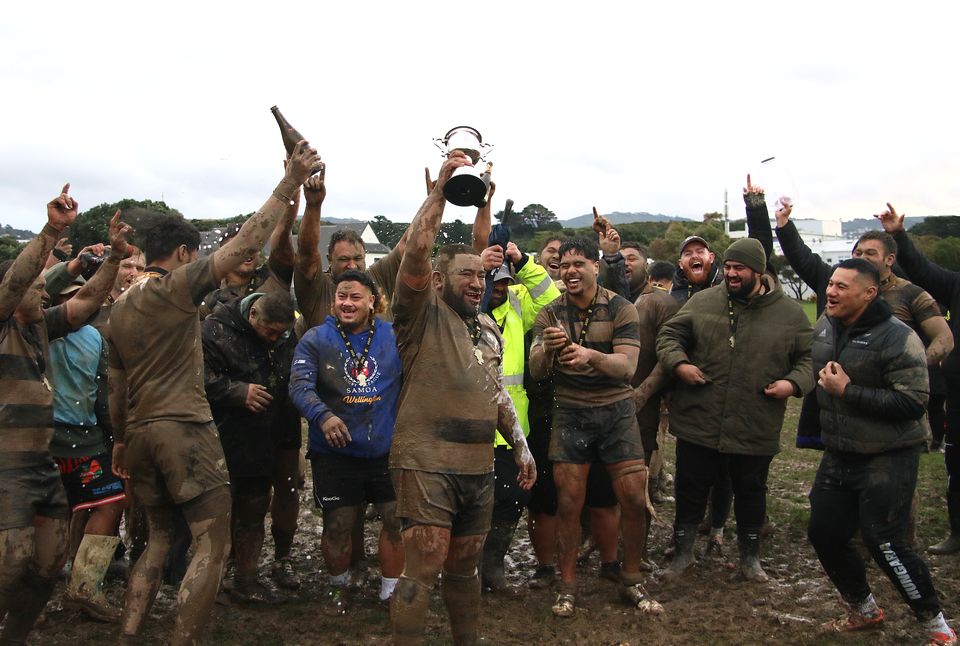 Sone Finai and the Oriental-Rongotai Vatos celebrate with the John Davies Cup this afternoon.

The Ories Vatos have retained the Reserve Grade Division 1 John Davies Cup title with a 43-14 win over the Poneke Ruffnuts the mud at the Polo Ground this afternoon.

The semi-finalists have also been found in the Colts and Premier 2 Division 1 competitions,  U85kg glory inched closer for the leading teams in that grade and the First XV Premiership round-robin is set to go down to the wire next week after at least one big result this afternoon involving HIBS beating Wellington College.

The Ories Vatos beat the Poneke Ruffnuts in extremely muddy but dry overhead conditions in their final.

The Vatos comfortably retained the John Davies Cup on the scoreboard at least, but the final was much more competitive than that suggests between the two eastern suburbs rivals.

Steady rain cleared in time for kick-off but the northerly wind also picked up, which Poneke had first use of and they quickly took a 6-0 lead through two penalties.

Ories replied with their opening try in their first foray into Poneke’s 22, scoring off the back of an attacking scrum.

Poneke got back down the other end and kicked their third penalty to lead 9-5 after about 25 minutes. However, Ories soon broke through the midfield to score consecutive tries, turning with the breeze with a 15-9 advantage.

This soon became 22-9 when they burst into Poneke’s 22 and built pressure and scored their fourth try.

Another incursion led to a penalty in front which they kicked to extend their lead to 25-9.

Poneke weren’t about to lie down, and former Premier prop Hennie Tui scored under the posts, but this went unconverted as the conversion was charged down.

Ories launched themselves back on to attack and scored their fifth try and match-clincher in the far corner.

Both sides were caked in mud as the clock wound down, but Ories closed the match with two consecutive runaway tries to second five Jay Tuilaepa, who had scored at least one of their first half tries.

Results went the way of seeding in the quarter-final round of the Premier 2 Ed Chaney Cup. Tawa showed no mercy against Old Boys-University romping to a 76-5 win and putting an end to a miserable last two months for the Goats second-stringers. Hutt Old Boys Marist were made to work by their Marist St Pat’s brethren before prevailing 32-17, Norths were winners by a similar margin over Oriental Rongotai 27-10, and Poneke slugged past Avalon 15-0 at Kilbirnie Park.

In steady rain, Poneke scored an unconverted try midway through the first half to lead 5-0 at the break. Avalon had first use of the wind and rain but failed to take their opportunities and missed a penalty in front with the last play of the first 40. Poneke scored in the left corner after going wide from a ruck to double their lead to 10-0 after 45 minutes. The winner was scored on 60 minutes with a forwards rumble in front of the Kilbirnie Pool.

At the Hutt Rec, HOBM were warm favourites on a chilly day, but it took the best part of 75 minutes to subdue a stubborn MSP. After surviving an early onslaught, the visitors opened the scoring with a penalty, it took some time for the first try which the hosts scored when winger Charlie Brosnahan danced down the sideline before feeding Oakley Edmonds. A second soon followed through midfielder Sala Soloa and it looked like the Eagles had blown the game open. But MSP hit back twice themselves in the space of five minutes to take a 17-14 lead into the break.

Following the resumption Edmonds levelled matters at 17 early on, before Brosnahan crossed off a well worked scrum set-piece. HOBM would lose a man to the bin for repeated infringements but continued to withstand MSP’s assaults and put the game out of reach when left wing Louis Mitchell crossed with Edmonds icing it with a late penalty kick.

Paris Memorial winners Petone eased into the semi-finals with a 21-5 win over a plucky Poneke, and they’ll face Marist St Pat’s next week after the latter were too good for Wellington, winning 48-5. In the other side of the bracket HOBM will host OBU after the Eagles put away Pare-Plim 45-8, but the Goats were made to work for their win only getting home 17-10 against Tawa.

The season doesn’t end today for those losing sides, as they’ll play for the Division 2 silverware. In those Wellington will host neighbours Poneke, and Tawa will do likewise with fellow northerners Pare-Plimmerton.

Johnsonville all but booked themselves a place in the Division 1 Paul Potiki Shield final in two weeks’ time after they beat the OBU Scallywags 22-10 at Nairnville Park, while the Upper Hutt Rams prevailed in the Kilbirnie mud 6-0 over Poneke. Those results set up next week’s final round with Johnsonville against the Upper Hutt Rams and OBU to face Poneke in matches that also double as third-round National Club Cup matches.

In Division 2 Stokes Valley put themselves into the title decider by beating Avalon 15-6, with the Wolves to take on Eastbourne next week to see who will face them after the Gulls beat Wellington 29-21. In Division 2 HOBM are top seeds for the semi-finals next week after they beat MSP 15-0 and will host Wests, with MSP at home in the other against Petone who beat the Roosters 36-29 in a rollicking encounter.

Eastbourne rallied from a 21-5 deficit in their win over Wellington. Ironically Eastbourne dominated territory and possession in the first-half but the concession of two intercept tries had the Seagulls in a potential hole. Instead, the hosts tightened their game. The boot of Piri Bradshaw pressed Wellington back and their rolling maul, often involving a dozen, was imperious. Two pushover tries from as far back as 20 metres sealed a hard-earned victory.

The eye-popping result of the penultimate round of the College Premiership came on the slopes of Mount Victoria, with Hutt International Boys’ School registering only their second-ever win over Wellington College as they prevailed 10-8. That result vaults HIBS back into playoff contention while leaving Coll at the mercy of being overhauled by Town as they have the bye next week. St Bernard’s – who beat Wairarapa College 29-12 – Rongotai, 27-7 winners over Mana, and Scots, who had the bye will battle it out for the fourth playoff place in next week’s final round. Silverstream, Wellington College, and St Pats Town – who beat Stream 19-13 in their Traditional on Wednesday – are already qualified for the playoffs.

In Premier 2 the four semi-finalists have already been found with a round to play. The Silverstream 2nds are assured of top spot after their trounced their Town counterparts 55-0 and Upper Hutt will host the other semi-final after eliminating Aotea from contention with a 32-5 win. Bishop Viard remain third after a narrow 22-21 over Taita, and the Wellington College 2nds beat Paraparaumu 36-13 to be fourth. In the remaining match Naenae got their first win by beating Hutt Valley HS 12-0.

The next match involving these teams is on Wednesday night, with Bishop Viard and Upper Hutt meeting in the final of the Co-ed Cup with the winner going through to the Hurricanes Regional competition.