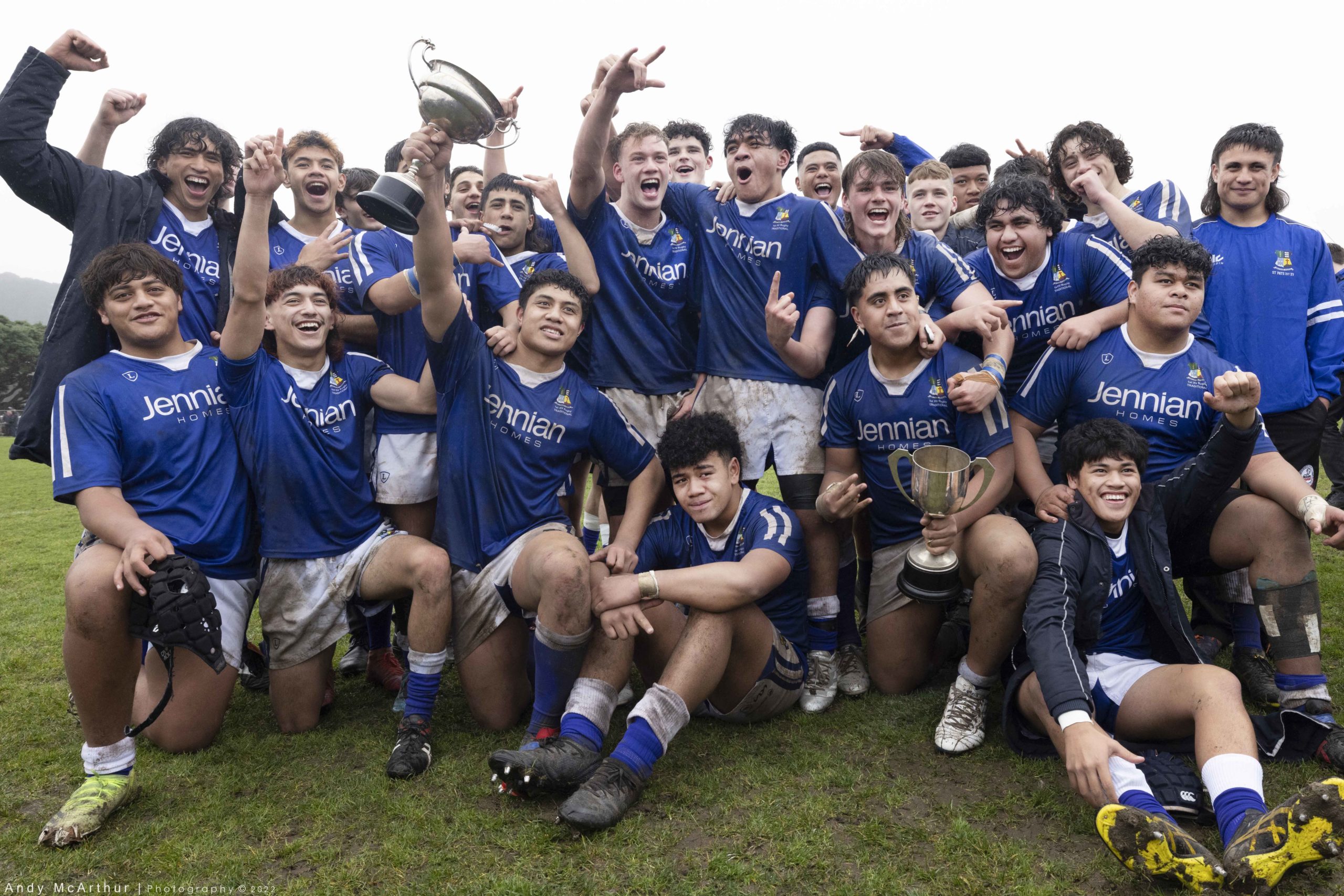 St Patrick’s College Town outmuscled St Patrick’s College, Silverstream 19-13 to win the Old Boys Cup traditional fixture for the first time since 2010. In 2010 Southland held the Ranfurly Shield and most of the Town lads were at kindergarten.

Town was more gusty, intelligent and clinical on the mucky surface at Evans Bay Park, holding the victors scoreless in the second-half.

Town made a passionate start to the contest, Italian exchange student and openside flanker Luca Bellucci scoring off a lineout drive in the corner. This was converted by fullback Zion Fuiava to put them up 7-0.

Bellucci was caught offside and Silverstream halfback Ollie Cuff kicked a penalty in front, before Silverstream’s scrum pushed Town off their own ball 30 metres out and loose forward Jackson Mendoza broke for the visitors and offloaded to first five Maui Winitana-Patelasio who scampered through to score the game’s second try. Cuff’s conversion put them in the lead 10-7 inside 15 minutes of play.

Cuff increased the Silverstream lead with this second penalty, before a mock preview of the second half occurred. Town pressed hard but failed to score any points, twice knocking the ball over the line. Fuiava missed a 38-metre penalty attempt

Town continued their vibrant attack early in the second half and they were rewarded, not once but twice.

Another penalty and lineout drive saw hooker Czana Siale rumbling over the line for their second try. The conversion was missed, but Silverstream’s lead was now just a point.

First try scorer Bellucci won a big turnover in centre field. From the next scrum, Fuiava drilled the corner and Silverstream knocked on their defensive lineout.

From the next attacking scrum, Town attacked the line with direct, low, hard, pick and goes.  Loosehead prop Salesa Seumanufagaii drove over to score their third try. This time Fuiava’s conversion was good and Town were now up 19-13.

Stung by conceding two tries, Silverstream put immediate pressure back on Town, but the home side held them out and frustrated them into repeated errors. Silverstream turned down a handy penalty kick with about 15 minutes to spare.

With a dozen minutes remaining Town second-five Francis Mettrick collided in the air with Silverstream fullback David Tokalatawa which caused anxiety for the leaders.

Only a penalty was conceded, and soon the regular pattern resumed. Silverstream’s impatience and inaccurate attack fumbling. Town dispatching Silverstream back inside their territory and applying the blow torch in the tackle.

The game ended with Silverstream attacking fruitlessly at their own ten-metre mark.

Silverstream No.8 Braydon Soi was combative and the scrum once again impressed.

Bellucci was nearly battered into submission after half an hour for Town but continued to withstand heavy punishment and cause even greater headaches for Silverstream. Blindside Jordan Chapman tackled with sting and locks Charlie Pothan and Ben Higgs improved immeasurably after a shaky start.

Town have only won this game 20 times. Silverstream enjoys 65 victories and five matches have been drawn.

The match doubled as a Premier I fixture. Silverstream suffered their first defeat of the competition but remained on top of the table, two points clear of Wellington College and three ahead of Town. There are two rounds remaining before the semi-finals.

Silverstream defeated Town in the U15 match earlier in the day. St Pat’s Town won the annual Old Boys’ fixture 22-21.

However, HVHS who lost the corresponding fixture last year by 86-0 proved to be dogged competitors in deteriorating conditions. HVHS was heavily outsized by St Bernard’s.

On a heavy surface the visitors scored two tries in each half. Centre Jade Rangihuna struck in the opening minute when the ball was ripped clean from the grasp of a HVHS attacker and Rangihuna dashed 40-metres clear.

St Bernard’s No.8 Andy Soanai proved to be a real handful, often breaching the HVHS defence. Loosehead Junior Fa’asoa is physically a colossus.

HVHS never really looked like scoring though they did have a rigorous passage of pick and drives on the St Bernard’s line late in the first-half.

No.8 Lautasi Iosefa is a senior player and carries with gusto. Left wing Jaydee Fleetwood had some quality moments with his pace and desperate defensive scramble eye-catching. Openside Marcus Alexopoulous recovered from a rough start to punch above his weight.

HVHS defended with commendable heart, hassling St Bernard’s into repeated fumbles and thwarting a number of breaks before they turned up on the scoreboard.

The two schools play for the Challenge Cup. St Bernard’s won the first match in 1966 by 8-3, and have historically dominated the rivalry. Competition ceased between 1977 and 1984 because both schools were playing in different grades. In 1985 the series resumed and has pretty much continued uninterrupted since.

If St Bernard’s College beat Wairarapa College at home in Premier I on Saturday they will jump ahead of defending champions Scots College by a maximum of four points. Scots has the bye this weekend and then hosts St Bernard’s in the final round.