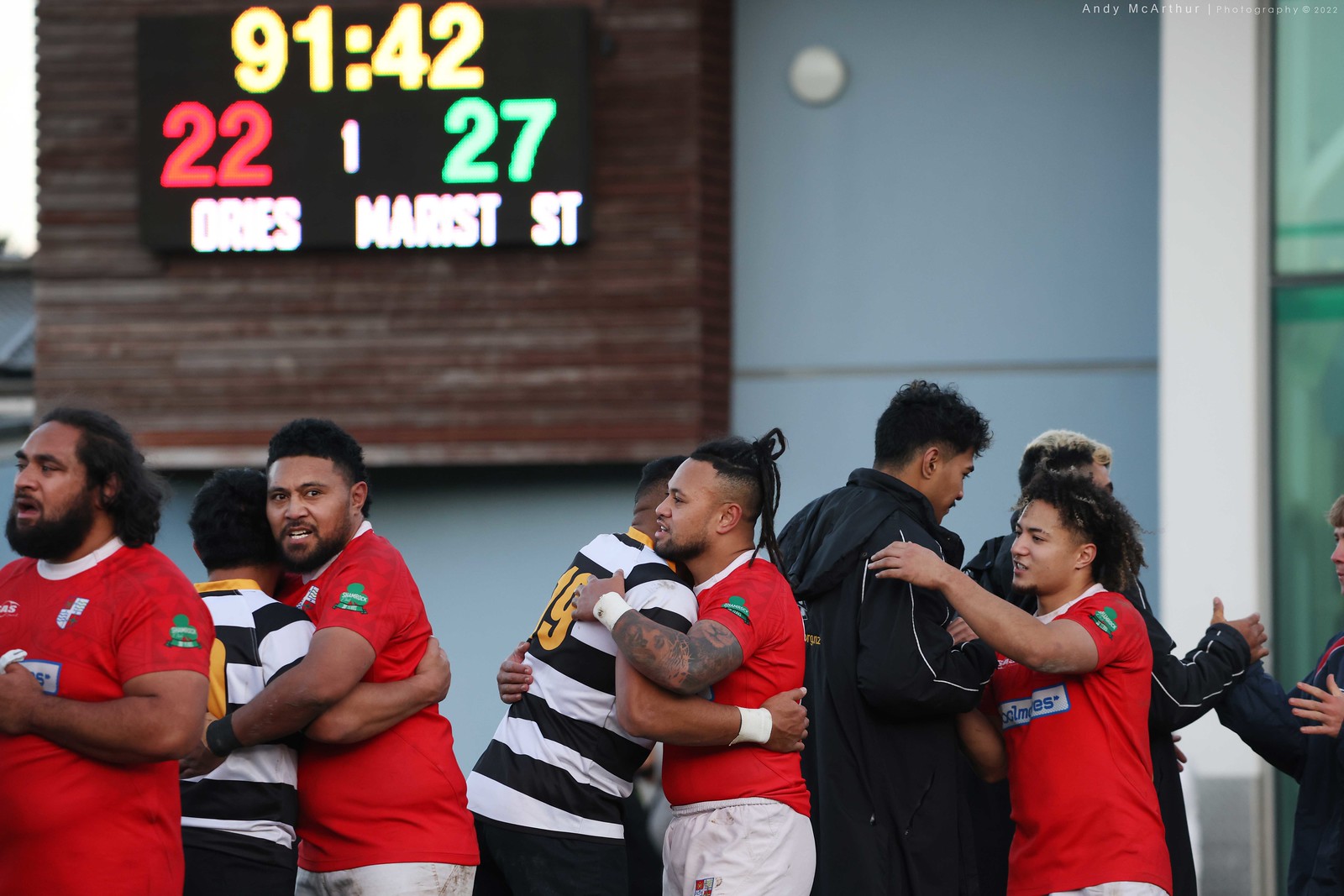 Virtual quarter-finals coming up this coming weekend, leading to a shot at glory for some teams and the end of the line for others.

With their wins on Saturday, the top two seeds after the first round, Petone and Hutt Old Boys Marist, have earned this Saturday off. This leaves 12 sides in action on Saturday. Games at a glance are:

On a far less positive note, Club Rugby understands that the Upper Hutt Rams 85s side has been docked five competition points and one player suspended for 11 weeks resulting from incidents in their loss to Poneke last Saturday. Our points table will be updated when WRFU does theirs.

A four week finals series and unintended consequences. With a quarter of the season taken up by finals weekends, there is one school of thought that thinks that player eligibility laws could be relaxed by a couple more weeks until the semi-finals. It is suggested that the competition could be better off if the best possible players were playing as much as possible. On the flip-side, the laws are the laws and you can’t parachute in guys who are not Wellington Lions-contracted players who haven’t played the required three matches for the club earlier in the season.

On the same subject, more unintended consequences of the four-week finals series appear to be the demise of a couple of trophies. The Andy Leslie Trophy was first awarded in 2009 to the top qualifier at the end of the Jubilee Cup round-robin series. No round-robin anymore, so no Andy Leslie Trophy. Hopefully this gets reinstated. One way to present it could be to give it to the highest qualifying team that makes the Jubilee Cup final. Often the Swindale Shield winner, but not always. Similarly, the Bill Brien Challenge Trophy appears to be in abeyance at the end of the Swindale Shield round. Perhaps it could be extended to at least the semi-final rounds?

A notable event happened at the start of the Ories – MSP Jubilee Cup game on Saturday.MSP blindside flanker Josh To’omaga received one of the quickest yellow cards seen on Kilbirnie Park. Referee Daniel Mangin sin-binned him from the opening kick-off. A sideline supporter shouted out “he’s been doing it all day ref!”

The curried sausages at Tawa Rugby Football Club have been a long-time after-match delicacy. Compliments to the kitchen staff.

The Wellington Axemen Colts beat Poneke 62-22 for the Misiluni Moananu Shield on Saturday:

Some hot form by HOBM Colts flyhalf Kobe Joe-Vulu on Saturday, making numerous breaks and scoring at least two sizzling tries from the first five-eighth position in his team’s 61-5 win over OBU Green, albeit in large part taking advantage of uncontested scrums owing to front row injuries and illness in the OBU camp. The former St Pat’s Silverstream player has made nine appearances including four as a starting winger for the Eagles Premiers this year.

The Manawatu Cyclones beat the Wellington Pride 34-10 in their pre-season Women’s NPC match on Sunday.

No matter the grade 200 games is a mammoth effort, so hats off from us at Club Rugby Towers to MSP Under 85s player Malcolm “Mumba” Mashingaizde who reached the mark in their win over Wests.

The same publication suggesting that former St Pat’s Silverstream and Norths and Tawa flyhalf Sam Clarke will be in the Turbos this year.

Sticking with Manawatu club rugby, the Senior A [Premier] semi-finals are this coming weekend, with Varsity (1) hosting College Old Boys (4) in one semi-final and Old Boys Marist (2) and Feilding Yellows (3) meeting in the other.

The Horowhenua-Kapiti Ramsbotham Cup matches on Saturday saw Waikanae beating Foxton 28-21, Paraparaumu defeating Levin College Old Boys 30-7 and Rahui beating Shannon 25-14 – so wins for the the Kapiti teams over the Horowhenua ones.

The combined Taratech team won the Hawke’s Bay women’s senior final 38-7 against Hastings Rugby Sports Club. Taratech won all nine matches in 2022 and were led by experienced halves combination and former Black Ferns Emma Jensen and Krysten Cottrell. Jensen holds the record for most first-class matches by a Kiwi female with 183 while Cottrell, a five-time Black Fern, was the top points scorer in the Farah Palmer Cup last year. Taratech was a combination of Taradale and Napier Tech clubs.

New Zealand won their opening match of the Oceania Under 20 Championship in torrential rain 74-5 against Fiji on Friday. Fiji suffered a red card and conceded 52 points in the second-half. New Zealand’s next match is against Argentina on Tuesday at 4.00pm.  Argentina beat Australia in their first game.

Note: Record is Colts, U21 and U20 matches combined.

Wests Roosters Old Timers’ Day on Saturday commemorated 40 years since the amalgamation of Athletic, Karori and Onslow in 1982. There is a magnificent 5-metre mural in the Wests club rooms which celebrates the history of Athletic RFC.

Wests was first incorporated on 8 April 1983. As well as the three Wellington representatives below, the first Senior 1 [Premier] teams included one K.C. Laban.

Oriental-Rongotai’s Ardie Savea nearly doubled the number of ball carrying metres (55) than the next All Black Jordie Barrett (31) in their 42-19 win over Ireland at Eden Park. Sevu Reece on the intercept made no contact with the Irish defense, those metres recorded in a different statistical category. Ardie made 15 tackles too.

Feilding’s Aaron Smith made two errors in the first five minutes against Ireland and then tried his best to emulate his masterclass against the same team at the 2019 World Cup. Wonderful to see the champion halfback out of auto pilot, the Highlanders hardly inspiring that effort.

The All Blacks made 198 tackles compared to 140 in their win against Ireland. Smith’s Feilding All Black teammate Sam Whitelock topped the count with 19, Scott Barrett 18 and Ardie Savea 15 tackles rounded out the top three. Samisoni Taukei’aho made 14 tackles off the bench.

Sam Whitelock played his 133th test, 133 is the same number of games King Country’s Colin Meads played for the All Blacks.

Upper Hutt’s Dave Rennie has only had nine wins in 21 tests as Wallabies coach but three of those victories have been achieved when Australia were reduced to 14 players due to a red card in the first-half.  In 2020. Flanker Lachlan Swinton was sent off in the 34th minute of a 24-22 win against the All Blacks in Brisbane. Marika Koroibete suffered a similar fate in the fifth minutes of a 33-30 win over France in Brisbane in 2021 and on Saturday Darcy Swain was dismissed in the 38th minute in a 30-28 success against England, Australia’s first in eight matches stretching back to 2015 against the English.

Springboks fullback Damian Willemse joined the third and final maul South Africa scored from in their 32-29 victory over Wales. Perhaps that’s all you need to know about the Springboks’ approach to attack. South Africa has won all 11 matches against Wales in South Africa.

Spectacular New Zealand sports trophies? Look no further than the Citizens Shield. You could take that into battle.