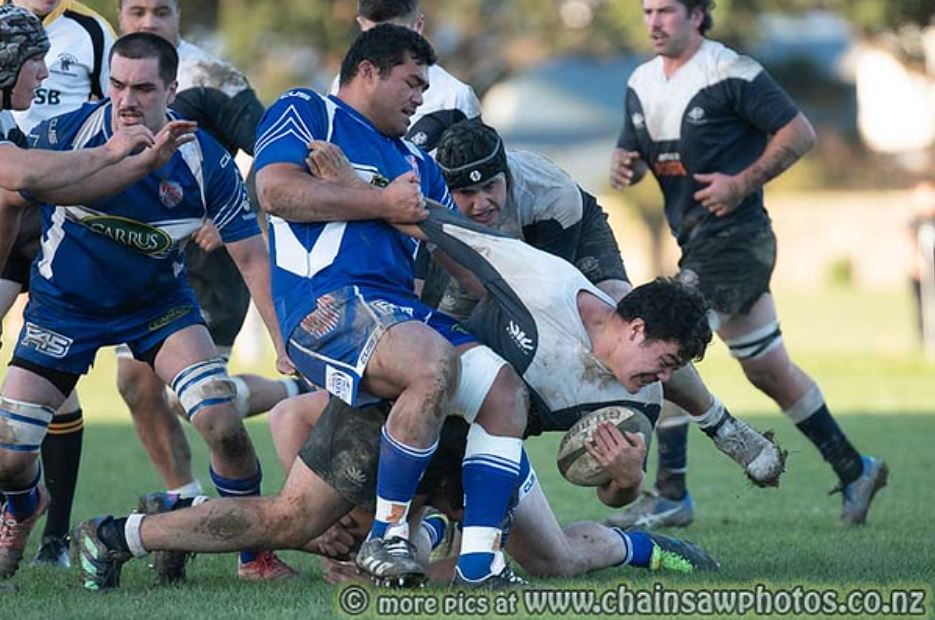 First round winners and top seeds Petone and Swindale Shield runners-up Hutt Old Boys Marist have earned a rest next weekend, winning their top four matches today in a pair of hard-fought encounters in the Hutt Valley sunshine.

At the Petone Rec, the home side pulled clear late to beat Northern United (seeded 4) 42-28, whilst up the road at the Hutt Rec, the HOBM Eagles held off a stern challenge from Poneke (3) 24-19.

The two losers of those games today, Norths and Poneke, will return home next weekend to host the two winners of the other Jubilee Cup encounters. Norths play Marist St Pat’s (8) and Poneke meet Tawa (6).

Ories and OBU drop down to the Hardham Cup for the remainder of their campaigns, which becomes a straight quarter-finals, semi-finals and final situation over the next three weeks.

Ories will host the lowest ranked loser from today’s other Hardham Cup matches, the Wellington Axemen, whilst OBU will entertain the second lowest loser from today, the Avalon Wolves.

Results from matches involving these teams today saw the Rams beating the Axemen 76-12 at Maidstone Park, Wainuiomata tipping over Johnsonville 27-22 and Paremata-Plimmerton scoring two tries in the final 10 minutes to beat the Wolves 27-22.

The Rams led the Axemen 34-0 at halftime, leaving more points out on the park with a couple of other missed opportunities and few conversions going over, more than doubling this by fulltime. flanker Daniel Schrijvers scored a hat-trick and fullback Tynan Barrett amassed 26 points.

In some extended action from the day, Norths led Petone 21-19 and both sides continued to shadow each other in an evenly contested second half. Petone wrestled a 35-28 lead than sealed victory at the end with their fifth try.

There was little in it at neutral Kilbirnie Park, where MSP crossed the road and established a 13-10 halftime lead, going on to win by five points. The game ended in the 91st minute with Ories hammering away on MSP’s line.

Tawa dismantled OBU in their 42-5 win at Lyndhurst Park .

Despite the presence of young Super Rugby players Taine Plumtree and Caleb Delaney, OBU was never in the contest, battered into submission by a rampant, heavier Tawa pack.

The first try was scored by fullback Randall Bishop who was unmarked on the wing following industrious forward vigour. Openside Western Sao is diminutive in stature but plays with huge heart, skill and aggression. He scored a 25-metre runaway which made it 17.0.

The only lapse by Tawa happened two minutes before halftime when OBU second five Ty Poe caught Tawa napping short side. Tawa was quick to regroup, robbing the kick-off and scoring through Trent Renata after a bust involving multiple players in front of the terraces.

The first try after halftime summed up OBU’s misery. Halfback Kyle Preston went to retrieve a kick but instead was victim of a cruel bounce, the ball eluding his grasp and falling for Tawa lock Hugo Plumber to score. The introduction of reserves didn’t offer any respite for the students. Reserve halfback Sywade Brightwell scored the final try supporting a slashing break by wing Mofate Suipolo. Tawa were close to faultess. Trent Renta scored 22 points.

The HOBM Eagles subdued a spirited Poneke to win their opening round Jubilee Cup match 24-19 at a sun-drenched Hutt Rec.

Like Tawa in their game, the size and power of the Eagles’ forwards was telling, combined with a piece of Fritz Rayasi magic that saw them overtake Poneke and hold on to win over the final 25 minutes.

Poneke had established a 16-14 lead about 10 minutes into the second half when a try in the right wing corner to right wing Isaac Moe-Jenkins saw Poneke re-claim the advantage after a bruising try from close range a few minutes earlier to loosehead prop Brett Manaia.

With the game evenly poised, Rayasi produced an individual run in broken play to score in the opposite corner. The conversion by second five Brandon Laursen put the Eagles up 21-16.

The Eagles extended their lead to 24-16 in the 69th minute through a Laursen penalty.

The Eagles were exerting significant pressure with their dominant scrum and with the moderate breeze at their backs. But Poneke held firm, and replacement second five Caleb Robson kicked a penalty in front to make it 24-19 with a few minutes to play.

With designs on scoring a late try as they had done against the Upper Hutt Rams a few weeks ago, a tense finish was unfolding. Laursen had a chance to extend the lead with a penalty. This missed, and Poneke attempted to break out of their own territory and were almost successful, the game ending on an Eagles turnover 30 metres out from their own line.

Poneke had started off the match in the best way possible when lock Cole Stewart plucked a high kick out of the air in Poneke’s 22 and linked up with right wing Moe-Jenkins who scored in the corner to put Poneke up 5-0.

Both sides had chances to score tries over the next 15 minutes, with Poneke almost crossing again in the same corner and the Eagles breaking out and fullback Zane Ainslie knocking the ball on with the line open.

HOBM maintained the pressure inside Poneke’s 22, and No. 8 Mika Alaifatu scored off the back of an attacking scrum next to the post to make it 7-5 to the home team.

Poneke edged ahead through two out of three successful penalties to halfback Sam Howling and they went into the turnaround ahead 11-7.

Both teams also had to make adjustments to their backlines during the first half, with Poneke second five El-nino Peniamina departing (leg) just after making a telling burst, and Eagles fullback Ainslie also departing (shoulder).

But HOBM have earned next weekend off in the Jubilee Cup playoff series, while Poneke will regroup to play Tawa.

Tawa flexed their muscle in the Premier 2 Division 1 Ed Chaney Cup for the second week in succession, thumping previously unbeaten HOBM 54-10 in the early match at Tawa. Norths moved into second after beating Avalon 38-29 while Ories got their first win over the round by beating Poneke 22-17. MSP were the day’s other winner, keeping OBU winless with a 26-20 result.

In the Division 2 HD Morgan Memorial, Stokes Valley remained in top after beating Johnsonville 32-12 on home turf at Delaney. Petone are second after they beat the Upper Hutt Rams 39-25 at Maidstone, with Wainuiomata beating Pare-Plim 38-19 in the other fixture.

The picture in the Colts grade got a little clearer after a day of heavy scoring in their ninth round.

Petone were untroubled in maintaining their lead, running up a full Nelson as they annihilated bottom-side Johnsonville 111-0 at the Petone Rec.

Across the river HOBM did their rivals a favour as they scorched a previously unbeaten OBU 61-5.

Paremata-Plimmerton moved into fifth after beating Avalon 36-15, while Wellington claimed the Misiluni Moananu Shield by winning 62-22 over Poneke. MSP sit fourth after Wainuiomata defaulted to them yesterday while Tawa had the bye

OBU went into the game with an injury crisis, and a lack of front rowers meant there were uncontested scrums from the start.

The Junior Eagles were also strong in the breakdowns, with openside flanker Sam Morgan often prominent.

The Eagles ran in five tries to one to lead 35-5 at half time and then maintained the pressure early in the second half to establish a 54-5 lead with about 20 minutes still to play. The remainder of the game proved a scrappy affair, but the Eagles had the final say by scoring their ninth try on fulltime.

In one piece of silverware confirmed today, the Johnsonville TerraHawks claimed the Under 85kg JC Bowl, though in circumstances they’d prefer not to after Avalon were unable to meet minimum numbers today and were forced to default. That pushes Johnsonville to 48 points, six ahead of the Upper Hutt Rams – who beat Petone 42-12 – ahead of their meeting next week.

Elsewhere the race for the remaining two places in the championship Paul Potiki round will go down to the wire after Poneke, the OBU Scallywags, and Eastbourne all won. Poneke moved into third after beating Wellington 33-3, the Scallywags beat the fourth contender, Stokes Valley, 13-0, and Eastbourne blanked HOBM 26-0. The other fixture of the day saw MSP keep Wests winless, winning 29-5 at the Ian Galloway cage.

Just the three matches again today in the College Premiership, following on from Silverstream’s 27-3 win over Rongotai on Wednesday. Wellington College put the week’s Quad disappointment behind them to atone for their home defeat to St Bernard’s two years ago with a 32-7 win. Scots were relatively untroubled in their visit to Masterton winning 40-12 over Wairarapa College, while Hutt International scored their second win by beating Mana 32-17 and leaving the latter winless at the foot of the table. St Pat’s Town had the bye.

In Premier 2 the Silverstream 2nds assumed the outright lead after blanking Naenae 52-0, while Upper Hutt fell a point behind after coming up short of a bonus point in their 21-7 win over the Wellington College 2nds. Bishop Viard beat Paraparaumu 33-13 up the coast, Aotea escaped with a 17-10 win over a plucky Hutt Valley HS, and Taita edged the Town 2nds 15-14.