Skip to content
You are here
Home > College Rugby > Pioneers of Rugby in Wellington: 017 J.M. Thomson 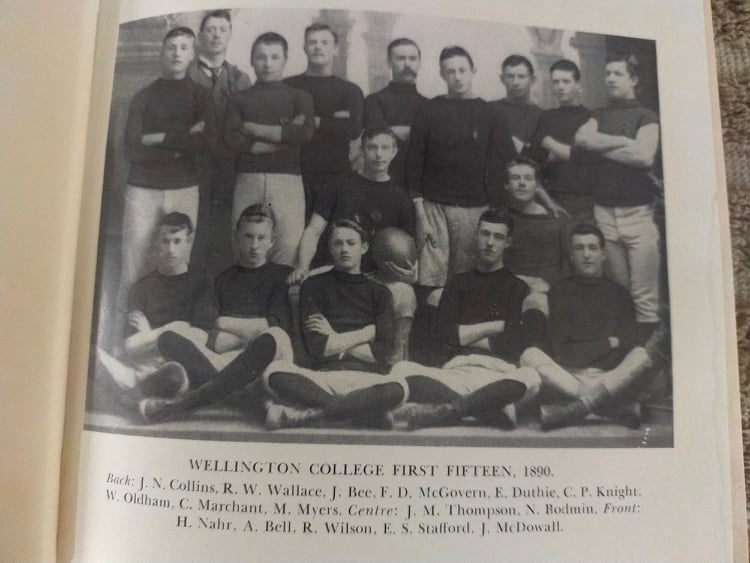 Inter-collegiate rugby, what is now First XV rugby, was played in fits and starts by only a handful of schools in the early years. But it was Thomson’s hand that instigated the first organised tournament – what became the Quadrangular Tournament – that helped spread and galvanise the fledgling game in the late nineteenth century.

J.M. Thomson was a Wellington College rugby player and the team’s captain in 1889 and 1890.

As a player in 1888 he was involved in the famous drawn annual Wellington College-Nelson College match at Trafalgar Park, Nelson, that was played in a sea of water. The Park was virtually a lake of water, with an average depth of six inches.

Supported by his own college’s support, Thomson wrote invitations to the other colleges. Thomson himself was from Whanganui, so that would have been the connection there. He was a student at Wellington College on a ‘Governors’ Scholarship.’

Interestingly, in 1889, the same year he wrote his famous letter, Thomson was the winner of the fourth annual Barnicoat Memorial Prize for English at Wellington College. He won this award again in 1890. So it is likely it was his superior writing schools which persuaded the other schools to get the very first tournament of its type in New Zealand off the ground. It would be good to know too that it was this letter that won him the Barnicoat Prize!

The Barnicoat Prize, honoured J.T. Barnicoat who was a junior master at the school and Latin and English teacher who tragically ended his own life during the 1886 school year. Barnicoat was also a player in the early Wellington Football Club teams. The award also came with a five-pound cash prize – worth about $1,000 today – so a possible financial incentive for Thomson to craft his letter to the other schools.

Thomson was successful in starting up a tournament the following year, 1890. An organised week of rugby involving three or more schools was no mean feat then as travel was difficult then. For the most part, travel was by sea as the railway network was still being built.

Wellington College, Whanganui Collegiate and Christ’s College took part in the first year and it was played in Christchurch. Wellington and Nelson met in their annual match separately at Petone.

It is unclear exactly why Nelson College did not take part in this first tournament and nor did they participate as a fulltime regular member until 1925 when it became the Quadrangular Tournament that is still being played annually today. Alan Turley in his book They gave us Rugby suggests it was because Nelson College rugby was struggling, and they probably couldn’t field a competitive team or that they felt they couldn’t commit with regular fixtures.

Christ’s College had the great J.P. Firth as its rugby master and coach. Firth would carry the Christ’s clipboard for another year, before joining Wellington College from 1892-1920 as headmaster. SEE OUR STORY WITH FIRTH HERE

The second tournament in 1891 was held in Wellington. It appears that Wellington College were weak and possibly rebuilding with Thomson and others having left school. Wellington College was captained by Frank McGovern, who led the team for the next three years. McGovern would be the school’s first listed head prefect in 1892.

Nelson College were also present but not officially part of the tournament and they beat Wellington College 14-5, drew with Whanganui Collegiate 0-0 and didn’t play Christs. As noted above, Nelson’s involvement would continue on an unofficial and irregular basis until 1925.

Whanganui won their first Triangular in 1892, the tournament was declared a tie in 1893 and Wellington College won for the first time in 1894 with thumping wins over their rivals, beating Christ’s College 25-3 and Whanganui Collegiate 30-11.

As for Thomson, it is unknown if he played rugby after leaving school. Wellington’s club competitions were expanding, and he could have played for one of several clubs What we do know is he became a clergyman because he led the Sunday morning church service when Wellington College celebrated its first 50 years on its present site in 1924 (that year was actually 1917 but the war and its aftermath prevented this in prior years).