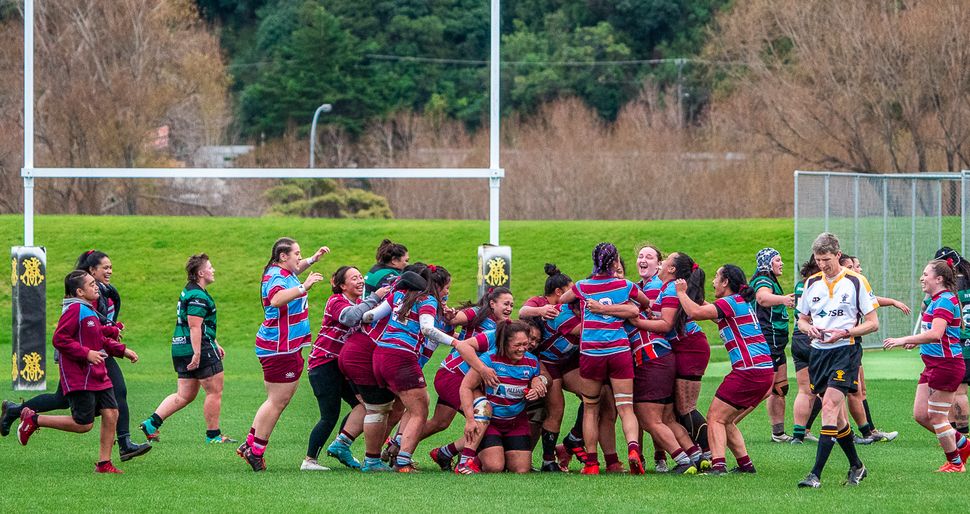 The Avalon She-Wolves celebrate the fulltime whistle in the Division 2 final against Wainuiomata. PHOTO: T-Paul Gale.

In 2017 Avalon had six registered women’s players. On Saturday the She-Wolves defeated Wainuiomata 19-12 in the Izzy Ford Cup second round, Women’s second division final. Today they have 32 registered players.

Hard work, a nurturing environment, and some vast experience are among the reasons for Avalon’s resurgence.

In 2020 Liz Nanai was invited to Avalon by She-Wolves manager Kesi Wong Kee to make a presentation about her long and illustrious rugby career in Hong Kong.

At the time Nanai was assisting both Hutt Old Boys Marist and Wainuiomata but impressed by the environment and potential at Fraser Park made an exclusive switch to Avalon.

“Initially I was going to help out by running the water, strapping, and doing a bit of coaching,” Nanai said.

“Almost every game though we’d be short of front rowers so I’d have to play.”

On Saturday the 51-year old loosehead was listed in the reserves but injury meant she was forced to play the entire final.

“Starting was manageable, but the whole game was much tougher,” she laughed.

“It was a game where you never felt confident at any time you’d won. It wasn’t because the girls lacked self-belief, it was because it was hard fought. The scrums were pretty even and Wainuiomata were really determined.

“We didn’t know if it would be a 15-aside final. When we played them the first time it was ten-aside and then 12 before they dropped a couple of players. It’s a real credit to Wainuiomata that they turned up with 15 players.”

Avalon led 14-12 at halftime and scored the only try in the second spell. Prop Ruth Lima, halfback Savannah Penieta and wing Val Laniuvao crossed the chalk for the victors. Nanai singled out two players in the squad for special praise.

“I was socialising after the game last week with our first-five Macca Jones. I knew she was young but because she’s quite mature in rugby terms I assumed she was in her twenties. When she told me she was 18 I was stunned.

“I had a bit to do with Hosanna Aumua, coaching at Sacred Heart College. Playing alongside her when she was captain was a real buzz. I’m so proud she’s in the Wellington Pride.”

Wainuiomata and Avalon merged in 2019 with Avalon venturing out on their own in 2020. Avalon’s goal next year is to make the top four of the Tia Passi Memorial Cup. Nanai’s daughter Octavia Nanai-Iafeta will feature in the final for Marist St Pat’s against Northern United on Friday.

From a touch and netball background, Liz only started playing rugby in her mid-thirties and furthermore that happened in Hong Kong.

“My husband at the time, Semi Iafeta, got an opportunity in 2003 to play in Hong Kong. I stayed at home working in a government call centre with two kids. Semi got lonely and encouraged us to come over. We were only supposed to stay a year. We stayed for 12.”

“I decided to play rugby because I wanted to expand my social circle beyond family. There is a big expat community in Hong Kong and there were a lot of opportunities for women to play rugby.”

“We started in ten’s and got smashed for a few years before we built up more numbers. I started in the second row before moving back to number eight. When I became eligible to play for Hong Kong the coaches asked me to think about playing prop and that’s when I became a specialist loosehead.”

Nanai was capped multiple times by Hong Kong who played in an annual Asia Rugby Women’s Championship against Kazakhstan, Japan, China, Thailand and Uzbekistan. Hong Kong was twice third when Nanai was in the team.

In 2017 Hong Kong made the World Cup. Portia Woodman famously scored eight tries for the Black Ferns against the first time competitors.

“There were wonderful opportunities to travel while playing for Hong Kong. I’ve even been to Kyrgyzstan.”

Nanai returned home in 2016 and ran an after school care business. She is now back in the government call centre where she was working prior to leaving Hong Kong.

The Avalon and Wainuiomata teams after the final. PHOTO: Hugh Pretorius.