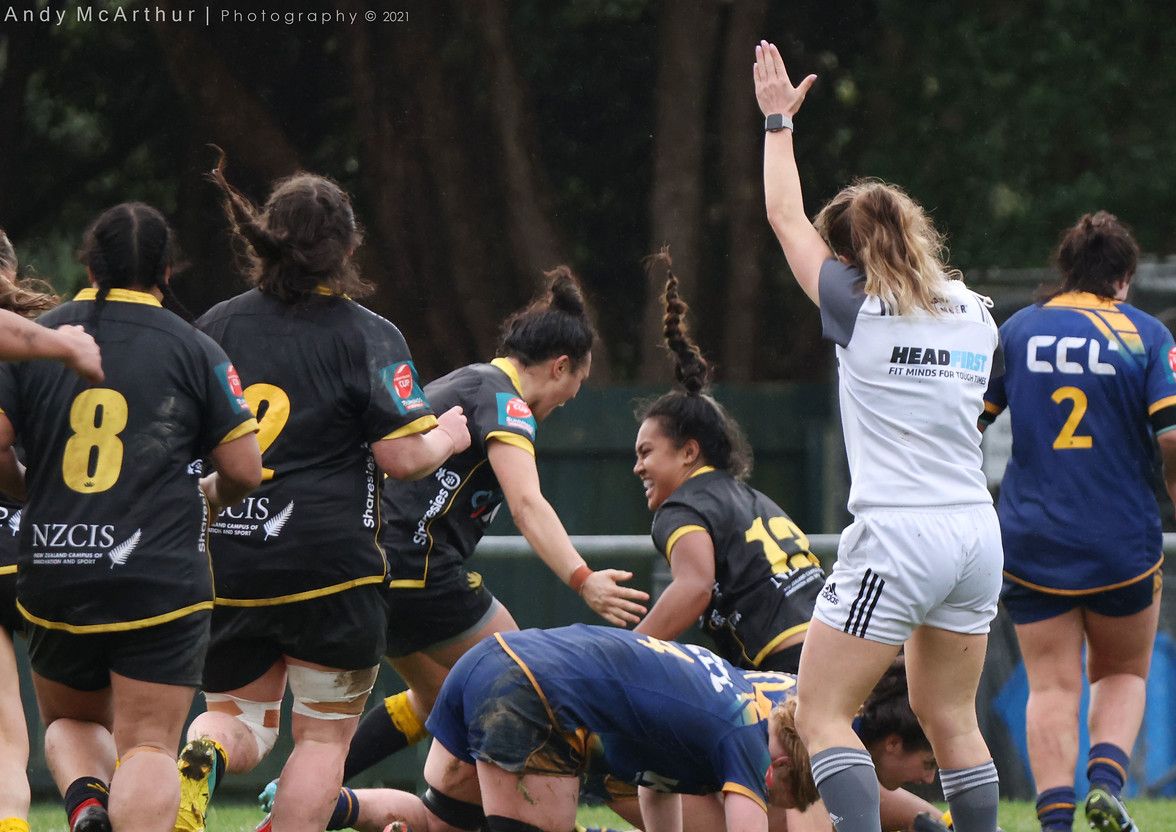 The Wellington Pride celebrate centre Monica Tagoai’s try in their opening round 13-5 win over the Otago Spirit last year. The Pride, with two former Otago players in their squad this year, return to Jerry Collins Stadium next month to open their 2022 Women’s NPC campaign against Canterbury.

The Wellington Pride 33-women squad for the upcoming Women’s NPC competition kicking off on Saturday 16 July has been announced today.

There is a small group of new Pride players, joining the team from outside the region with FPC experience elsewhere.

Recent Black Ferns hooker Kura Ngata-Aerengamate joined her sister and returning Pride lock Te Amohaere in the Northern United side at the start of this year,  and is vastly experienced out of from Counties Manukau.

Sydnee Wilkins is out of Motueka High School and has played 24 times for Tasman between 2017-21, as a centre, wing, fullback and occasional halfback.

Loose forward Maddie Feauanti attended St Mary’s College in Wellington but went to Otago after leaving school and she made seven appearances for the Otago Spirit in 2020-21.

Centre wing Teilah Ferguson is one of two players in the squad from Poneke. She started at Hawke’s Bay in 2017, before playing for Otago between 2018-21.

Alexis Tauaneai returns to the squad as the only Wainuiomata player, alongside her peer and local college player Justine McGregor out of St Mary’s College.

McGregors’s MSP teammate and former St Mary’s student Cheyne Copeland appears to be the only specialist first-five in the squad.

Their teammate Georgia Daals has also just been selected in the Black Ferns 7s squad, so her availability for the start or all of the campaign is pending.

Petone halfback Milly Mackey has been included, despite not playing at all this year thus far owing to concussion.

It is understood there are a further five players in the wider training squad as well, to cover for injuries or unavailabilities.

“We have put together a squad of experience and youth, and that’s exciting to see. We know we have the talent here so our focus is about making sure we get that connection as a team so the girls can go out there and express themselves on the big stage,” said head coach Zac Feaunati.

The Farah Palmer Cup NPC competition starts on Saturday 16 July at home against Canterbury at home at Jerry Collins Stadium, with the last round on Saturday 27 August ahead of the semi-final and final.

Pre-season fixtures to be announced.