Skip to content
You are here
Home > College Rugby > One for Dave: Rongotai rally to stun Wellington College 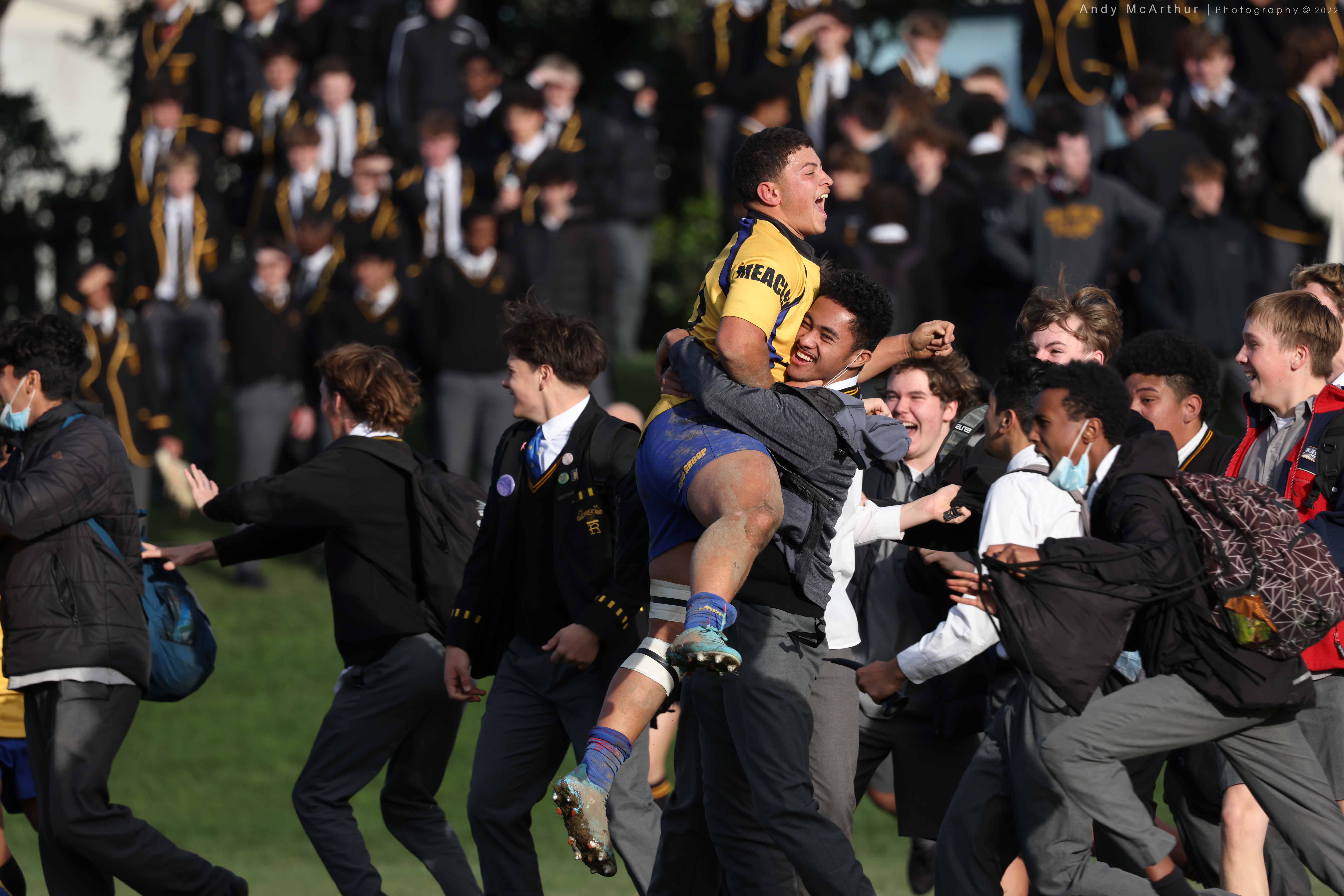 Rongotai College lost one of its treasured rugby stalwarts in January when Dave Meaclem succumbed to cancer aged 61.

He always said his favourite game of rugby was the 2003 Premier 1 final against Wellington College. Down 23-20, Rongotai prop Jimmy Taikato smashed over the line for the winning try close to fulltime.

Today’s Heron Trophy/Premier 1 fifth round fixture was the first meeting between the schools’ since Dave passed. It concluded in an eerily similar fashion.

Behind 24-20, Rongotai launched a furious assault on the Wellington goal line in front of an increasingly excitable crowd on the embankment.

The conversion missed with seconds left. Rongotai fielded the kickoff, a perpetual struggle throughout, and booted the ball to safety to secure just their fourth win against Wellington College since that aforementioned 2003 classic.

Earlier Rongotai hinted they could be stubborn opposition, certainly more competitive than the side that was blanked 34-0 by Wellington College in 2021.

Kianu Fiamatai kicked a penalty to open the scoring after 15 minutes, Rongotai more intense in an otherwise sloppy opening quarter.

Rongotai right wing Tane Robinson could have scored had No.8 Pharrell Gray delivered a pass after a bust shortside.

Wellington eventually found some exuberance, Rongotai split open on the flanks and fullback Fwent over for the first try in the right corner. Poto Tuitama-Tiatia was unlucky to be denied moments later. A slight forward pass was detected in a swift transfer to the left wing that involved several pairs of hands.

Hagen could hardly be described as a heavyweight, but he muscled the ball clear in the presence of two defenders to send second-five Jacob Kennedy clear for Wellington’s second try. The halftime score was 10-3.

Rongotai was listless immediately after the break. Wellington’s No.8 Abraham Fletcher scored and when the conversion was kicked the visitors were ahead 17-3.

Despite the apparent comfort of their advantage, Wellington lacked the edge that earned them victories against St Pats Town and Scots.

Mistakes kept the door ajar for the hosts and tries to hooker Makhai Auikuso-Lolo and fullback Moli Taulogo closed the gap to 17-13. Taulogo’s try was created after a faultless 8/9 scrum move shortside.

Wellington regrouped and the elusive Kennedy slipped through to dot down under the posts. Again the result appeared safe at 24-13, but Rongotai kept coming.

With seven minutes remaining Wellington fumbled a lineout at halfway. Rongotai kicked the ball into vacant pasture and trapped Wellington in goal. From a five-metre scrum, Rongotai executed another 8/9 scrum move perfectly and first-five Afaese Fa’Avae crashed past his opposite.

The face of Joseph Samuelu at fulltime said all you needed to know about Rongotai’s effort. Their forwards were more willing and didn’t fade as they have done in previous matches. Fa’Avae was very influential with his creative attack and defensive direction. Wellington sorely missed their usual starting first-five Stanley Solomon.

Rongotai lost their first three games of the season against Hutt International Boys’ School (24-27), Scots College (10-34) and St Bernard’s College (12-19) but find themselves in fifth place on the Premier 1 table just a point shy of the top four.

Rongotai won the Heron Trophy for the ninth time in 34 matches.

There were other school matches played today and this evening – we will endeavour to update these results as they become known.

Bishop Viard College put the Beard Trophy on the line for the first time this evening, hosting Porirua College at Jerry Collins Stadium. It was a successful defence, Bishop Viard winning 21-13.

The Wellington Premier First XV final has been moved from its traditional Sunday standalone slot to Saturday, where it will be put in with the Wellington Lions and Wellington Pride as part of a triple header at Jerry Collins Stadium. The new date is Saturday 20 August for this final.