Skip to content
You are here
Home > Club Rugby > Pioneers of Rugby in Wellington: 017 The Ryan brothers 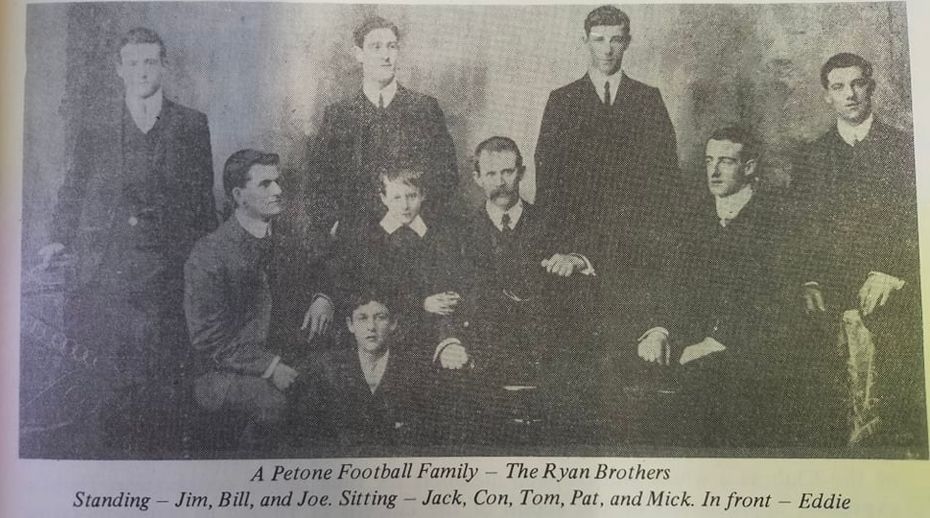 There were no fewer than eight Ryan brothers involved in the Petone Rugby Football Club, Wellington provincial teams and the All Blacks.

The Ryans made their mark in a collective career that spanned over two decades at the start of last century.

Five played for Wellington. Two were All Blacks.

Any list of great Wellington club rugby teams includes those Petone ones that won the Senior Championship in 1904, 1905, 1906 and 1907. In particular the last of these four-peat champion teams that won through adversity, having lost several players to rugby league during the year and beat a powerful Poneke line-up that had All Blacks Frank Mitchinson and Billy Wallace in the mix. Not only did Petone’s top team win but all five of the Villagers’ teams through the grades in 1907 won their titles.

The Ryan brothers’ parents, along with the eldest Thomas Jnr, had arrived in New Zealand from Ireland in 1876 and settled in Nelson. They later produced 14 other children – nine boys and five girls. A stroll around headstones Wellington’s Bolton St Cemetery (for example) tells a story of high child mortality. One plot on a restful grass clearing overlooking Bowen Street tells the story of a family of five all killed by diphtheria in the space of 18 months.

All but one of the Ryan children survived into adulthood. They were made of tough stuff, and this was manifested through their deeds on the rugby field.

Jimmy Ryan was probably the most famous of the rugby playing Ryans. Himself and Eddie were the family’s All Blacks.

The other surviving brothers were Thomas, Patrick, Jack, Mick, Joe, Bill and Con. One of the daughters would grow up to marry Billy King who also played rugby for Wellington.

In 1894 the family moved from Nelson to Wellington and their association with Petone started soon after through the eldest Thomas who was 21 at the time.

1912 was the year that five Ryans were in Petone’s Senior A team together.

The Ryans played varying positions. Jimmy was a five-eighth/midfielder, Eddie was a wing, Mick was a fullback, Joe was a wing, Jack was a hooker and Bill was a flanker.

Jimmy was more a utility back, representing Wellington for 11 consecutive seasons from 1905 in every position except for halfback.

He first made the All Blacks in 1910 and played 11 games and four tests between then and 1914 when the war opened.

He captained the New Zealand Services team to win the King’s Cup in 1919 in a tournament against South African, Australian, Canadian and British teams. He was also a member of the New Zealand Army side that made a successful tour of South Africa later that year.

Eddie made one appearance for the All Blacks in 1921, against New South Wales in Christchurch. He too served in the Great War and played for the New Zealand Services team with his brother Jimmy in 1919. He sustained hearing issues from an

explosion in the war.

He first played for Wellington in 1912 and was in the side that won the Ranfurly Shield off Taranaki in 1914 and who played a famous run of Shield matches in 1920.

Eagles clip Tawa’s wings as one of three unbeaten teams