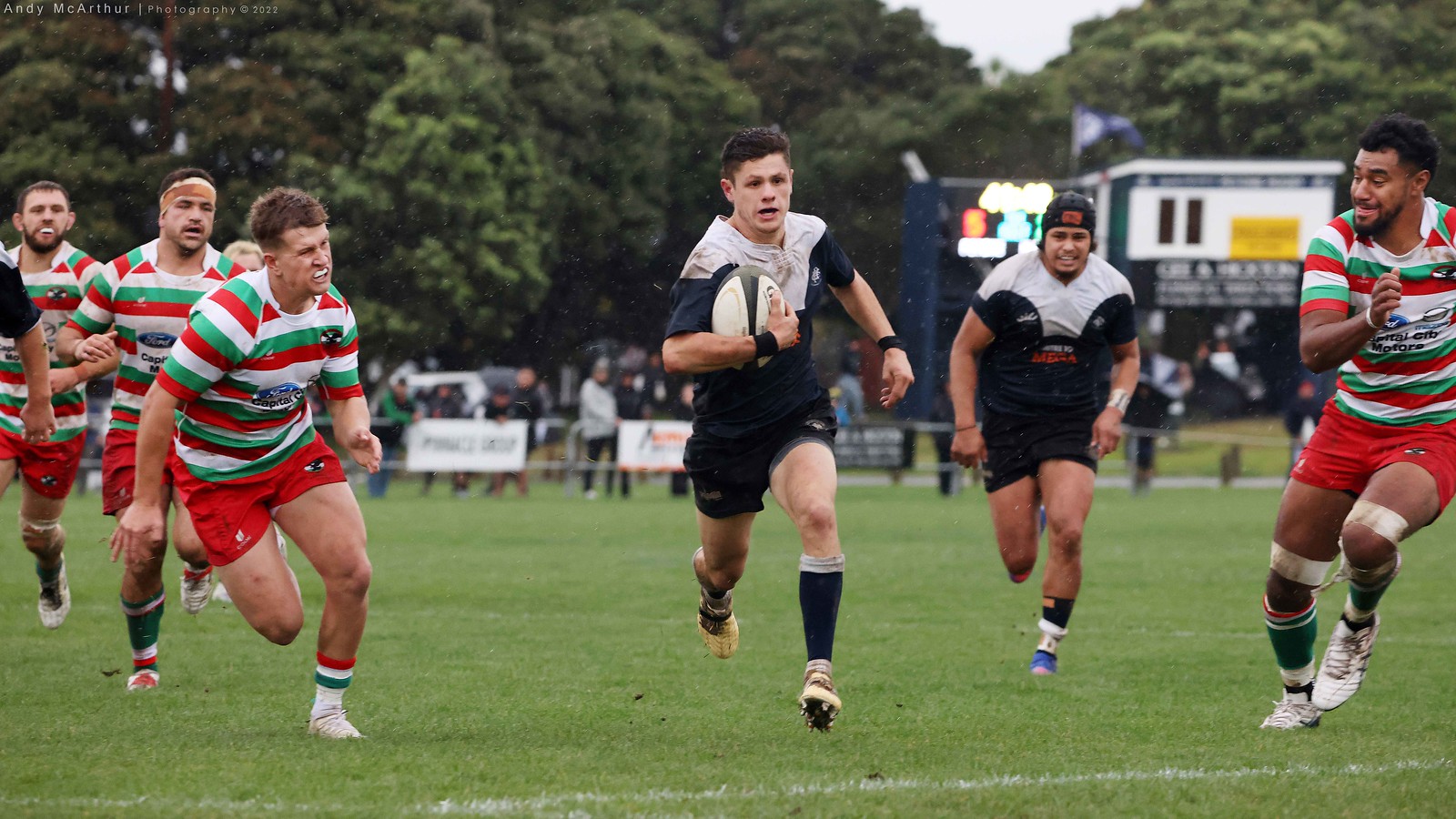 Cam Ferreira races through to score his try for Petone against Hutt Old Boys Marist in the McBain Shield earlier in the round.

“If it doesn’t come off, bugger it and move on,” is how Cam Ferreira describes the mindset of Swindale Shield leaders Petone.

The Villagers top the standings with a round to play and the sprightly halfback has been key to their success with his relentlessly positive play.

On May 14 he scored a crucial try with a quick tap and snipe in the McBain Shield win over second-placed Hutt Old Boys Marist.

Last Saturday he bagged a brace in a trouncing of Johnsonville. Ferreira has delivered to a high standard replacing Hurricane Logan Henry.

“I’m enjoying my rugby. This is a good group of boys who are pushing me and helping me get better,” Ferrreira said.

“I went to school with Logan Henry. He’s a few years older than me so I’ve sat on the bench behind him a while now. It’s good to watch him play first hand, take things off his game that I can adapt into my own.”

Ferreira and teammates celebrate a try in their recent match against Poneke. PHOTO: Andy McArthur.

Petone has come into their own in 2022. They have scored more points (485) and tries (69) than any team in the Swindale Shield. Youngsters Riley Higgins, Peter Lakai and Harry Godfrey were all selected in the New Zealand Under 20’s. First-five Carne Green is among the top five points scorers in the competition while forwards like Iona Apineru, Jack Ross, Jake Gooch and Tupou Sopoaga have been resolute.

With a bonus point win against Wainuiomata this Saturday, Petone will win the Swindale Shield for the first time since 2009. Wainuiomata have only won two games this season, but the Darren Larsen trophy fixture often brings out the best in the green and blacks.

Petone has not won at William Jones Park for a decade (24-20 on 5 June 2010 to be exact). Two years ago they lost 28-23 after a miracle try was scored by replacement wing Trei Mu. Ruben Love kicked the ball within a metre of the dead ball line. Petone allowed the ball to bounce and it didn’t go out.

“We were getting mixed calls all around. It was a genuine miscommunication. We decided to leave it and he sneaked through,” Ferreira reflected.

“I wasn’t sure if he scored, it was such a close thing, but the refs called it so I guess you can’t argue with it.

“I guess Wainuiomata has been a bit of a bogey team for us. We did beat them last year which proves we can change the course of history but we won’t be taking them lightly. We expect a gritty game and will have our wits about us.”

Petone has five wins by ten points or less this year, something Ferreira is enjoying.

“It’s such a competitive competition. It feels really different this year. Any team can win on the day and I think that’s great. Why is it more competitive? I’m not sure. I think some players coming back have strengthened teams and the harder work others have put in is paying off.”

Petone put in the hard yards to win McBain, a career highlight to date for Ferreira.

“McBain was awesome, it showed everyone has a roll to play, believes in each other and  supports each other. When Sammy Blackburn got his try I was chasing just behind, 20 metres actually, losing my nut.

“I was stoked with my try. I could see the defence was not organised so I gave it a go and it came off.

“I really appreciate the chance to mark Connor Collins. He’s a Wellington Lion and it was a big challenge to match up against somebody like him.”

Cam, an apprentice builder, is the son of former Premier coach Jamie Ferreira. His mother Tammy was a longtime, effective employee of the Wellington Rugby Union. Cam attended Hutt International Boys’ High School and was in the First XV for three seasons. In 2017 they fought their way back to Premier I status and in 2018 beat Rongotai College for the first time. In 2019 Ferreira was a Wellington U19 squad member.