Skip to content
You are here
Home > Club Rugby > Swindale Shield to be decided next week, Avalon win Women’s Division 2 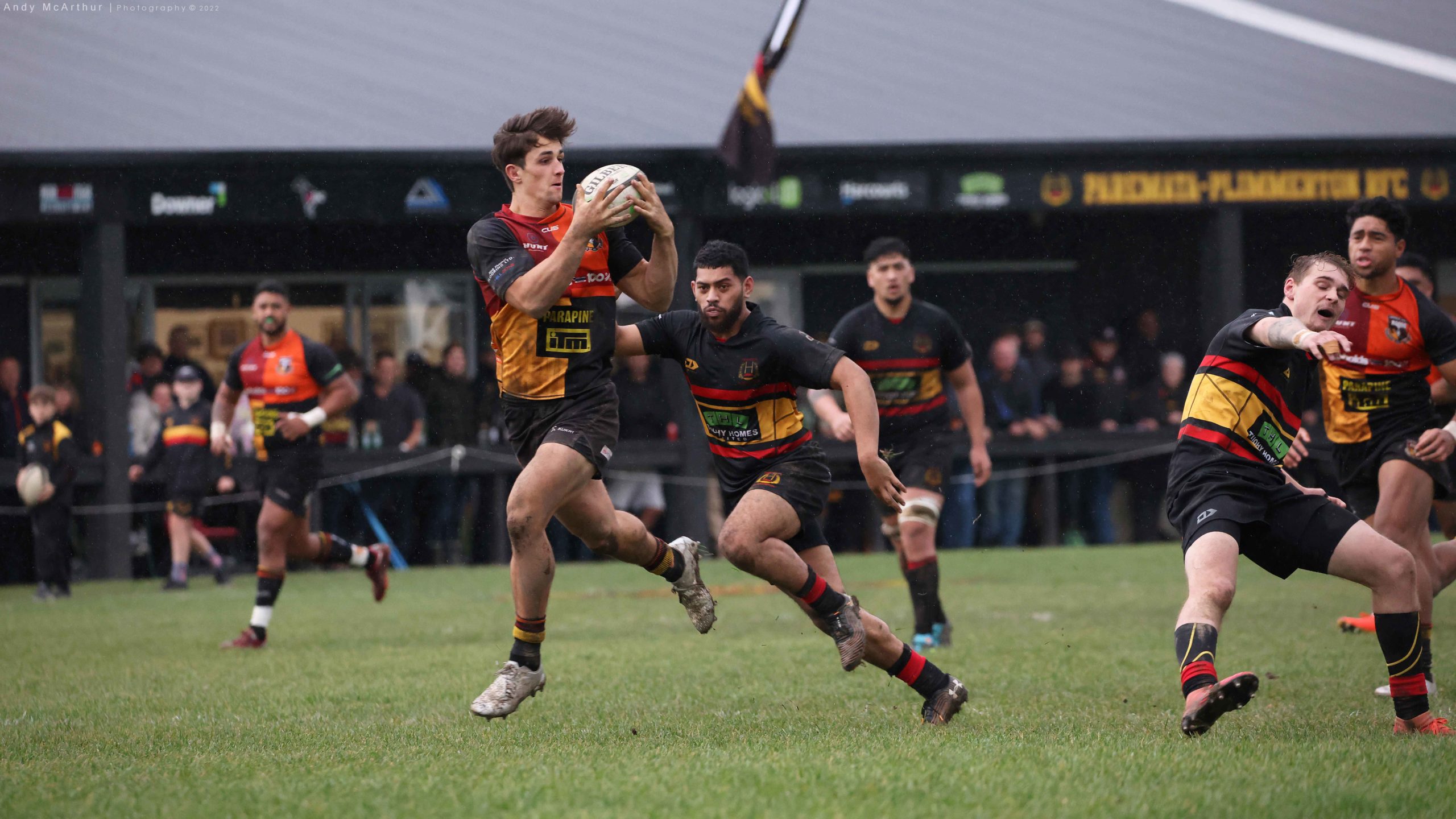 The Upper Hutt Rams backs were prominent again today, in their 45-19 win over Paremata-Plimmerton on Old Timers’ Day at Ngati Toa Domain. Both teams are Hardham Cup-bound in the second round starting in a fortnight. PHOTO: Andy McArthur.

The top eight teams who will start the second round contesting the championship Jubilee Cup are also all locked in after 12 rounds of 13. After today’s round, MSP occupy that eighth spot on 37 points, ahead of ninth placed Paremata-Plimmerton on 25, so it is just rankings for the start of the second round to be decided next weekend.

The Swindale Shield points table after 12 rounds of 13.

In Swindale Shield results today, Petone shored up their first round title credentials with a 72-8 win over the Johnsonville Hawks at home at the Petone Recreation Ground. Fullback Ben Brooking scored four tries, while Cam Ferreira and Richard Evans both scored two of Petone’s 12 tries.

At the Hutt Recreation Ground the HOBM Eagles ensured the title race will go down to the wire, when they won their Wood Cup interclub trophy against Old Boys University, 31-5. The Eagles soared to a 24-0 halftime lead over the Billygoats. There was no coming back for OBU, a sole try to left wing Owen Wright their only scoring try.

The Eagles beat the OBU Billygoats at the Hutt Rec. PHOTO: Caroline Lewis.

At Kilbirnie Park, home team Poneke’s six-game winning streak came to a halt at the hands of Tawa, the visitors winning 29-21. Tawa won with a bonus point and Poneke came away with nothing, although they remain in outright third on the standings.

Poneke made a bright start with left wing Isaac Moe Jenkins scored and Hurricanes U20 halfback Sam Howling converted top put them up 7-0.

Tawa replied with a try in kind to their Hurricanes U20s centre Isi Saumaki, converted by first five Trent Renata, and then scored three more tries in the first half to go up 24-7 at the interval. Saumaki scored his second try in this period, plus tries to left wing Tom Cutler and hooker Joyner Gaualofa.

This became 29-7 some 10 minutes into the second half when right wing Mofate Siupolu found the whitewash. The Streetkids came back with tries to first five Caleb Robson and flanker Connor Strang but Tawa held them out over the final 10 minutes.

Meachen himself barged over in the right hand corner early in the first half for a try, setting the scene for the big win.  But not until after Wainuiomata scored consecutive tries to take a 14-7 lead. From that point though, it was all MSP, racing to a 43-7 lead by halftime and shutting the gate soon after halftime.

Over at the Polo Ground, home side Ories continued their mid-season resurgence with a 34-15 win over the Avalon Wolves.

In a couple of extended Swindale Shield summaries, a late first half scoring blitz earned the Upper Hutt Rams a 45-19 victory over a hearty Paremata Plimmerton on Old Timers’ Day at Ngati Toa Domain.

For much of the game it was the hosts forwards who dominated possession and hammered away inside the visitors territory. However a lack of variety on attack contrasted with some slick outside Rams back play was the telling difference.

It was 10-7 to Upper Hutt after 20 minutes. Para Plim scored from a rolling maul pile up and Upper Hutt twice cracked Para Plim out wide. Hurricane Salyesi Raysi was at fullback for Upper Hutt and he was full of running, punishing poor clearances and providing space for wing Tyan Barrett and centre Todd Svenson; 10.7 quickly became 31-7.

Paremata-Plimmerton scored a penalty try from a scrum and the halftime score was 31.14. Todd Svenson scored a second try immediately after the break popping a kick into space and regathering a bounce where the fullback should have been. Esi Komaisavai scored a try from a quick tap to make it 38.19 but when Scott Svenson scored from more expansive Rams play, the Hammerheads had no chance of winning the game despite slogging manfully for 20 minutes – held up multiple times.

Upper Hutt were effective in the loose, winning key turnovers and defending stoutly. Daniel Schrijvers scored a try, as did his replacement Josh Hunt. Hurricanes prop Tosi , at No.8, was amongst Pare-Plim’s best.

At Jerry Collins Stadium, No. 8 Luca Rees scored the opening try off an attacking lineout after a few minutes.

The backs soon got in on the action and some interplay put Hurricanes first five Jackson Garden-Bachop in behind the posts. Right wing Losi Filipo was the next try-scorer s Norths went up 19-0 after 15 minutes.

The Axemen replied with their only try of the fixture, to halfback Will Cosgriff following a quick tap penalty to close the score to 19-7 with a quarter of the game played.

It was all downhill from there for the vistors, Norths scoring from the next kick-off and more tries coming to make it 45-7 at halftime.

Jackson Garden-Bachop crossed under the posts again 10 minutes into the second half, and from there the floodgates opened. Second five Faraimo Nofoaiga scored the try that raised 100 points.

For Norths, several players stood out, not least Garden-Bachop who finished with 36 points, while for the Axemen, halfback Will Cosgriff tried had to stem the flow all match.

Avalon won the Division 2 fina 19-12 at home at Fraser Park against Wainuiomata, in an evenly contest decider.

Avalon scored the only try of the second half, but this was enough to win the title.

The Division 1 Women’s final next round will be between Northern United and Marist St Pat’s, after the former beat Petone 24-5 in one semi-final at Jerry Collins Stadium and the latter defeated Oriental-Rongotai 39-12.

At Evans Bay Park, MSP led 17-7 at halftime and Ories closed to 17-12 early in the second, before MSP pulled clear with a rush of tries to win well.

For MSP, right wing Drenna Falaniko scored two of their seven tries, which also included one from Monica Tagoai returning from injury.

Petone spent a long period of the first half camped deep inside Norths territory but couldn’t score. Just before halftime, Norths centre Harmony Ioane collected a dropped ball from a kick ahead near halfway and sprinted away to score their second try. Halfback’s Tamara Ruaporo conversion doubled their lead to 14-0 as the players went to the turnaround.

Norths started the second spell hot on attack and the pressure soon told when their first five broke through for their third try.

Petone regrouped and should have scored soon after, No. 8 Jackie Patea-Ferei being held up over the line and a wayward pass into touch being two clear chances that went awry.

Norths lost both openside flanker Aimee Sutorious and lock Te Amohaere Ngata-Aerengamate to yellow cards, and finally against the 13-women Norths, the Ponies broke through out wide to close the gap to 19-5.

But Norths had the final say at the end, flinging the ball wide for the final try of the day after a turnover at the base of a scrum.

Tawa and HOBM top the ledger after two rounds of the Premier 2 Ed Chaney Cup. Tawa kept their long unbeaten streak intact by beating Poneke 29-15 at Kilbirnie Park, while HOBM topped OBU 21-3 at the Hutt Rec. The other two results were something of minor upsets as MSP headed off Norths 33-29 at Evans Bay, while after being denied at the death last weekend promoted Avalon notched their first win, holding on 29-28 over Ories at the Polo Ground.

A bit of a shake-up in the Colts table. As expected Petone and OBU remained unbeaten with the Villagers thrashing Avalon 86-7 and OBU rolling past Wainuiomata 55-10, but HOBM suffered their first loss beaten 22-20 by Tawa at Lyndhurst. MSP moved into third after they beat Poneke 52-7, while Pare-Plim are now fourth after they overran bottom-side Johnsonville 55-5. Wellington had the bye this week.

Little change in the lightweights grade this week as well.

The Upper Hutt Rams and Johnsonville remain unbeaten with the Rams beating valley rivals HOBM 32-5 while the Hawks didn’t even leave home, defaulted to by Petone yesterday. Stokes Valley remain third after they beat Eastbourne 19-14 on the Gulls’ Old Timers’ Day, while Poneke are fourth after they heaped further misery on strugglers Wests winning 68-0. Further down the table the OBU Scallywags edged out Avalon 12-5 in a slugfest at Fraser Park, while Wellington beat MSP 27-21 under the Hataitai lights last night

Today’s round of First XV Premiership action largely went as expected with Scots, Silverstream, and Town all notching wins, while St Bernard’s came away from Rongotai with the spoils from a 19-12 win. Scots accounted for Hutt International 34-10 at home, Town beat Mana 32-3, and Silverstream’s trip of the Remutaka’s was a successful one as they beat Wairarapa 40-10 in a catchup match from round one.

Town’s margin of victory was perhaps flattering, as they struggled to subdue a shorthanded but fired up Mana side on a heavy field in Elsdon. The only scoring in the first half was an opening penalty to Mana and a try to Town as the hosts kept finding ways to upset the visitors as much as Town being their own worst enemies. But after some typically forthright words from coach Ross Bond, Town hit their straps from the restart with their big forwards rolling up their sleeves and crossing three times in the opening 10 minutes, before adding two more before full time.

In Premier 2 there were wins for Taita and each of the Silverstream, Wellington College, and Town 2nd XVs. Taita beat Paraparaumu 19-16, Silverstream were 29-7 winners over Aotea, Town pitched a 22-0 shutout over Naenae, and Coll overpowered Hutt Valley HS 75-12. The fifth match didn’t go ahead as Bishop Viard defaulted to Upper Hutt yesterday.

The precise Puma who helped the Eagles Colts fly