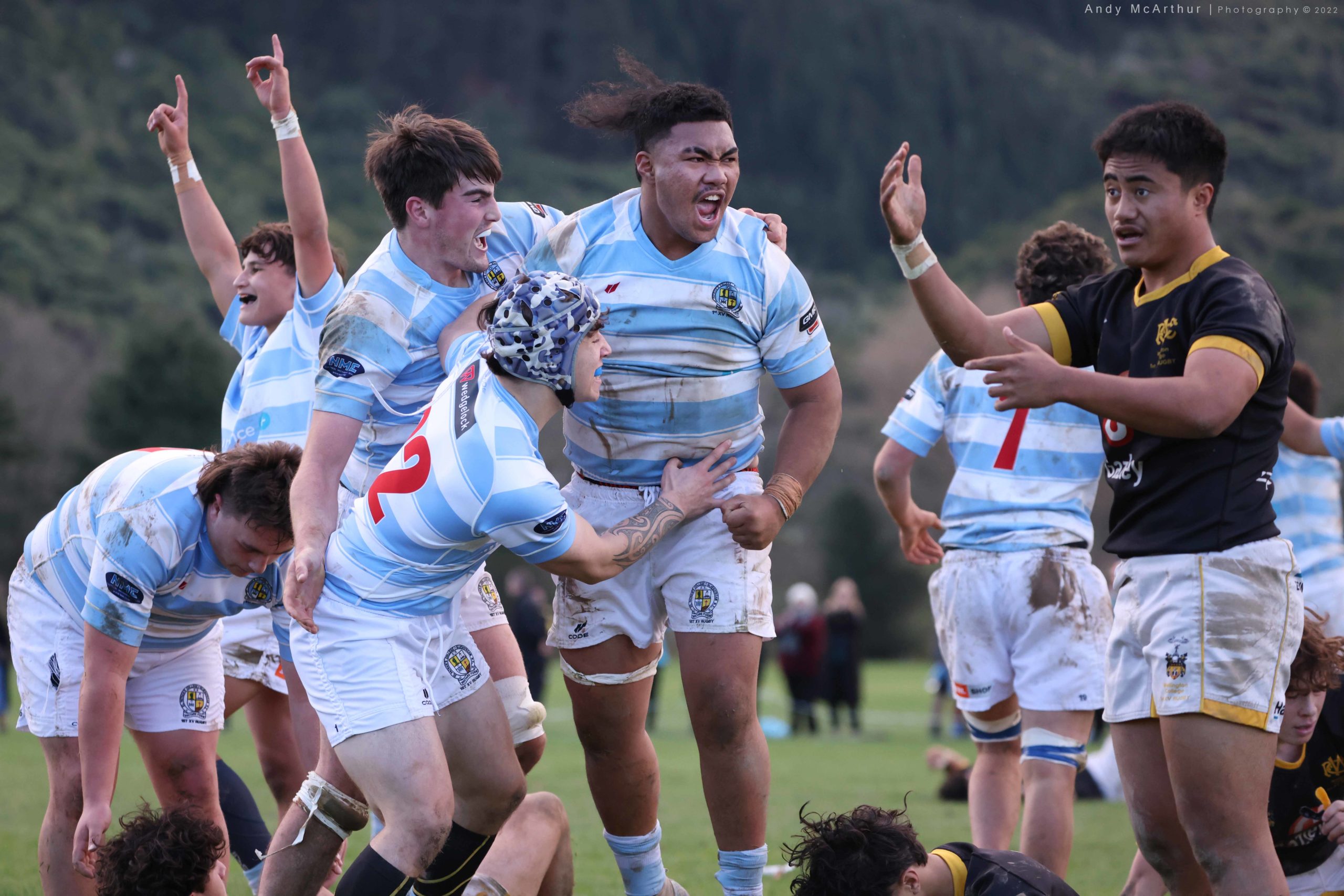 St Pat’s Silverstream have regained the Ken Gray Trophy in their 91st traditional First XV meeting against Wellington College, winning 19-12 in front of a big crowd on their school grounds this afternoon.

Both encounters between these two schools last year went down to the wire, and this followed the same pattern.

With scores tied up at 12-12 heading into the last two minutes, Silverstream halfback Ollie Cuff had a chance to win the game with an angled penalty into a slight breeze, but pulled it wide.

Silverstream had one final opportunity to get ahead, and after multiple phases of relentless attack with ball in hand inside Wellington College’s 22, they went wide and tighthead prop Patrick Solomona was on hand to receive a pass and dive over the line. Halfback Cuff’s conversion was good and his school mates swarmed the field.

Winning try-scorer Solomona was part of a dominant Silverstream tight five and front row that proved the difference in as tight and willing contest, as the scoreline suggested.

Solomona’s front teammates, hooker and captain Toby Mallon and loosehead prop Senio Sanele were also to of the game’s key protagonists –  as well as helping to convincingly win the scrum battle, which was a telling area of dominance for Silverstream throughout.

Mallon made numerous carries and kept his side on the front foot against a tenacious, disruptive Wellington College defence, while Sanele scored Silverstream’s first two tries in the second half. All three of Silverstream’s tries were scored in similar vein, building phases and eventually overwhelming the defence on the fringes from close range.

Despite being dominant up-front, Silverstream took a long to settle. They made several handling mistakes and their discipline was erratic for much of the game. For Wellington College, No. 8 Jack Riley was into everything, supported by openside flanker Angus Miller.

Both sides had chances to score tries in the first half but neither could convert these. Silverstream probably had the best chance to cross the line in the first 35 minutes, a bust and some quick recycling resulting in them being held up over the line.

The visitors started the second half brightly, winning another penalty, this time for offside, and Solomon kicked a 37 metre penalty to extend their lead to 9-0.

Now facing a two-score deficit, Silverstream re-focused and after a good spell with ball in hand, Sanele scored his first try, to cut the lead to 9-5.

The next 10 minutes or so of the contest was dominated by stoppages as players went down injured and play was held up.

Eventually, the game regained its flow as Silverstream once more  got a roll on. Turning down a gift three points under the poles, they instead opted for a lineout on the embankment side of the ground.

This was taken cleanly by workhorse lock Travis Polglase and Silverstream ripped it wide to the far side. They were initially kept out, but prop Sanele burst over to score his second try. Halfback Cuff slotted the sideline conversion, and they were in the lead for the first time, up 12-9.

With about 15 minutes still to play, Wellington College were not done yet. They started to make in-roads, with the likes of Solomon and others making several incisive runs through and around traffic.

Double try-scorer Sanele also went off injured, resulting in another delay in play, and soon after Wellington College were awarded another penalty. Their talismatic first five stepped and kicked it to make it 12-12.

A draw was good enough for Wellington College to retain the Ken Gray Cup, but they almost scored a try but were kept out. Instead, the home team, through their powerhouse scrum and direct ball runners regained territory and tighthead Solomona subsequently became the toast of Upper Hutt by scoring the winning try on fulltime.

As far as the Premiership competition goes, this was Wellington College’s first loss in four matches and have this weekend off, whilst Silverstream have only played two games. They play Wairarapa College in Masterton in a catch-up game this Saturday.

Head-to-head, Silverstream have now won this traditional 51 times, Wellington College 33 and there have been seven draws.