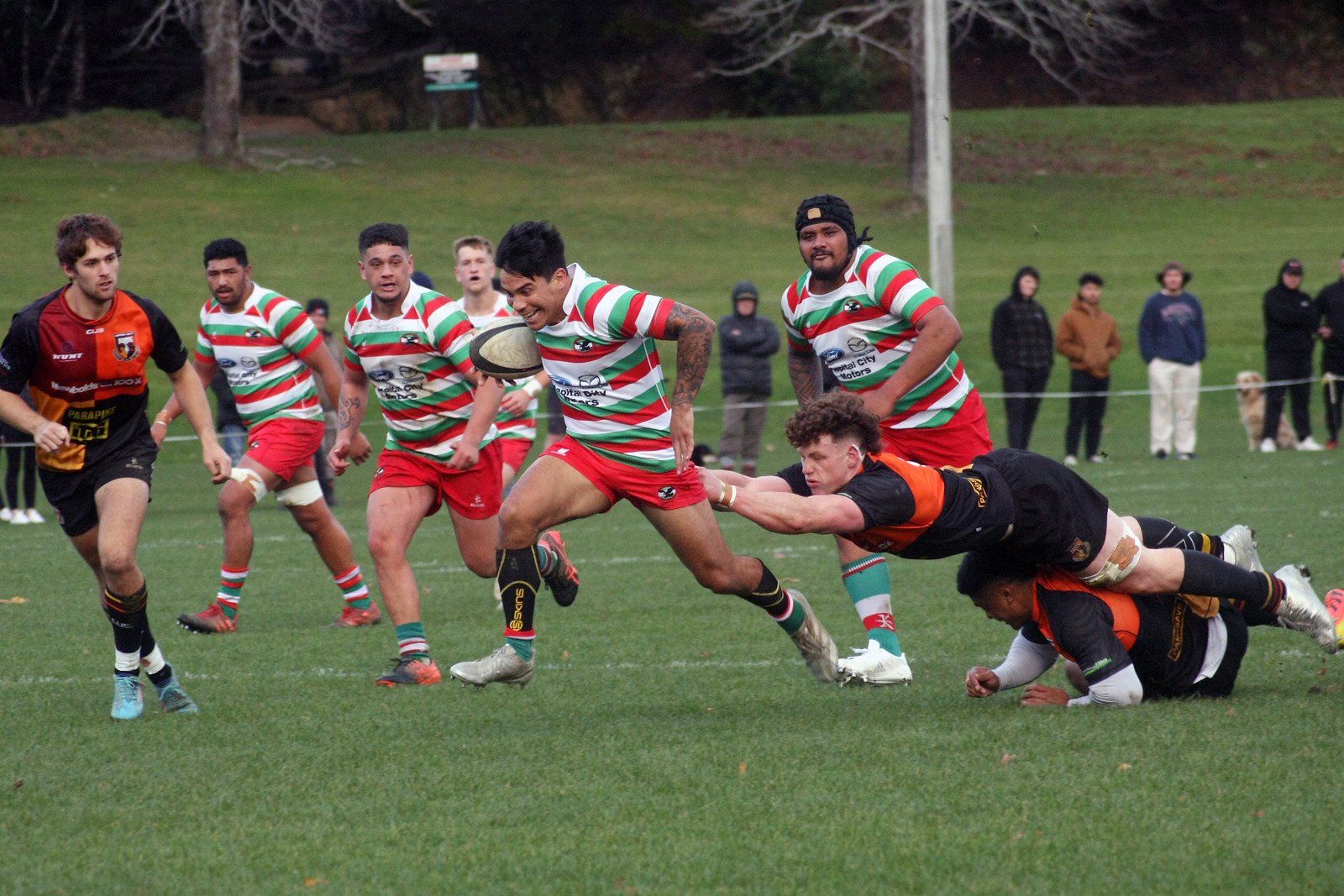 Monday lunchtime updates: Some wild weather yesterday and forecast to continue into today, with heavy rain softening up the region’s sporting fields if they weren’t already!

Seems remarkable that with two full rounds left (plus the aforementioned catch-up games) that no team has year locked in one of those top four berths that come with a bye or a life. However, Petone, Poneke, and OBU are assured of being inside the top eight as things stand, and Wednesday’s matches will make this picture all the more clearer.

Also expecting All Blacks and New Zealand U20s squads to be named early this week. We were told Monday (today) for both of these. Any bolters in the All Blacks team? Anyone new from Wellington? We will see.

UPDATE: The All Blacks have been selected. Read more here: https://www.allblacks.com/news/six-new-caps-in-all-blacks-squad-for-2022-steinlager-series/

Good to have a handful of local Hurricanes back in club rugby on Saturday, with players such as James O’Reilly, Jackson Garden-Bachop and a bloke called Coles all making a difference and adding interest.

Individual try scoring has been spread around this and no single player or players has gone on a try-scoring spree this season. But in the last two weeks, there have been two instances of a player scoring four tries in a match. Last week Reuben Va’a scored four tries for Ories and this week Riley Higgins did so for Petone.

Higgins’ four tries takes him to 11 in six games this season, and to the top of the charts*, and 19 in his 13 Premier games to date. *We are still waiting to receive Tawa’s try and point scorers from Saturday as we publish this, but this shouldn’t make a difference.

Big shifts on Saturday for Avalon twins Jordan and Jayson Aquila. Both went the full 80 in their Premier Reserves last-minute loss to HOBM and then took places on the bench for the Premiers. Jordan was called into action on the half-hour, while Jayson followed at half-time, so the two logged 250 minutes of rugby between them.

Another to come off the Wolves’ bench was veteran lock Damian Collins. More commonly found with a microphone MC’g home games for basketball’s Wellington Saints these days, “nearing 40”, and “on his third or fourth return from retirement”, his 15 minutes represented his first Premier action (according to our database) since the 2010 Hardham Cup Final and 19 years since his debut against Upper Hutt.

Petone Women’s outside back Tyler Bentley-Tuari has been prolific. She has scored 17 tries in nine games played for her side, and earlier in the competition scored four tries in a match on three occasions.

The Women’s Challenge Cup has changed hands on consecutive weekends, after Norths beat Ories for this last weekend and then MSP took it off Norths on Saturday.

One other player making his return on Saturday was Henry Time-Stowers, who played his first game for Wainuiomata since 2015. Since then he has been playing for the Western Force, Canterbury and most recently Moana Pasifika.

Expect a swag of departures for the Hurricanes to be announced this week. Alex Fidow is one who has already gone public that he won’t be back with the side next Super Rugby season.

Also expect confirmation from the WRFU that Wellington’s Premier 2 side will not be fronting for the second-round HD Morgan Memorial. Given that they only fronted with a full 15 once – and that was for a game rescheduled to a Friday night  – and were forced to default others due to illness it doesn’t come as a surprise, but according to the WRFU’s rules it puts their status as a Premier club in some jeopardy. Some good news for the Axemen though, with their Colts winning over MSP on Saturday.

Does anyone have a good reason why the trials for the U16 Williment Week went ahead yesterday despite the appalling weather?

Also sideline for that match was professional rugby player Jason Woodward. He would have gone well on Saturday with the new breed of Rams players, including the Svenson brothers Todd and Scott who scored three of their tries. Hurricanes wing Salesi Rayasi was also a spectator, having played for both teams in the past (current club HOBM). Former Rams captain and loose forward Josh Brown was another watching on.

Another unusual sight on Saturday was seeing past WRRA President Jared Clarke out in the middle with a whistle, rather than in his usual capacity of taking photos of referees. Owing to the general shortage of referees, compounded by a couple of late withdrawals, Clarke handled the Tawa vs Ories Premier 2 clash at Lyndhurst Park.

Three weeks ago the OBU and Norths Premier 2 sides played out a 38-all draw in their Harper Lock Shield match at Nairnville Park. Fast forward to Saturday and the two couldn’t be separated again in their Ed Chaney Cup opener at Jerry Collins Stadium, finishing locked up at 29-apiece.

As alluded to in Saturday’s round-up, the Upper Hutt Rams U85kgs took down the Stokes Valley U85kgs by a tight winning score of 7-6. The Rams are now the frontrunners in the JC Bowl, unbeaten on 32 points.

The MSP Internationals finished the first round Division 2 with seven straight wins and having scored 221 points and let in 62.

Scott Robertson and Jason Ryan have won 85 out of 100 games as Crusaders coaches. The Chiefs (4) and Hurricanes (3) account for half of the Crusaders’ defeats in this period.

The Crusaders made 222 tackles in their 20-7 semi-final win over the Chiefs. Tom Christie (30), Scott Barrett (28) and Cullen Grace (24) topped the individual tackle count. Even prop Ollie Jager made 20 tackles.

Blues prop Ofa Tu’ungafasi channeled his inner Tupou Sopoaga with a late charge down in the Blues narrow 20-19 victory over the Brumbies in the Super Rugby Pacific semi-final. It was a mighty effort in the 80th minute following a poor quarter-final where he was outmuscled by Highlander Ethan de Groot.

A third Black Ferns capping ceremony was held in Auckland with 26 of the 238 players receiving their cap. Wellington’s Charlene Gubb (née Halapua), Sanita Levave and Jackie Patea-Fereti were honoured.

In Manawatu Senior 1 [Premier] club rugby, Varsity lead the standings on 36, ahead of Old Boys Marist on 35, defending champions Feilding Yellows on 34, College Old Boys on 29, Kia Toa on 22, Te Kawau on 11 and Freyberg on 7. The standings are tight in part because College Old Boys beat Varsity 16-15 on Saturday. A close race to the playoffs is expected.

A tightly contested Horowhenua-Kapiti Ramsbottom Cup clash on Saturday in the battle of the Kapiti Coast, with Waikanae edging Paraparaumu 26-23.

In Taranaki club rugby, Southern broke an 18-game losing streak in style – beating defending champions Inglewood 43-13. Their 30-point win is their first since the opening round last season.

Club Rugby congratulates the Pulse for their 56-37 Premiership netball win over the Stars from Auckland yesterday in Wellington.

We have interviewed/profiled a number of the players involved in past years as school athletes for the College Sport Media website, and at least a couple of the players have also featured on this website as rugby players too, and a more talented and committed group of female athletes you will not find anywhere. Special mention for Tiana Metarau (ex WEGC) and losing captain Maia Wilson (ex MAGS) for their excellent and engaging speaking and communication with the media and in the post-match presentation.

On the subject of other sports, below is ex-All Blacks coach John Mitchell’s son’s achievements in recent days (plus 190 this weekend in the next test):

This column is a collaborative one – to send us news and information or to contribute, please email editor@clubrugby.co.nz or message us on social media.