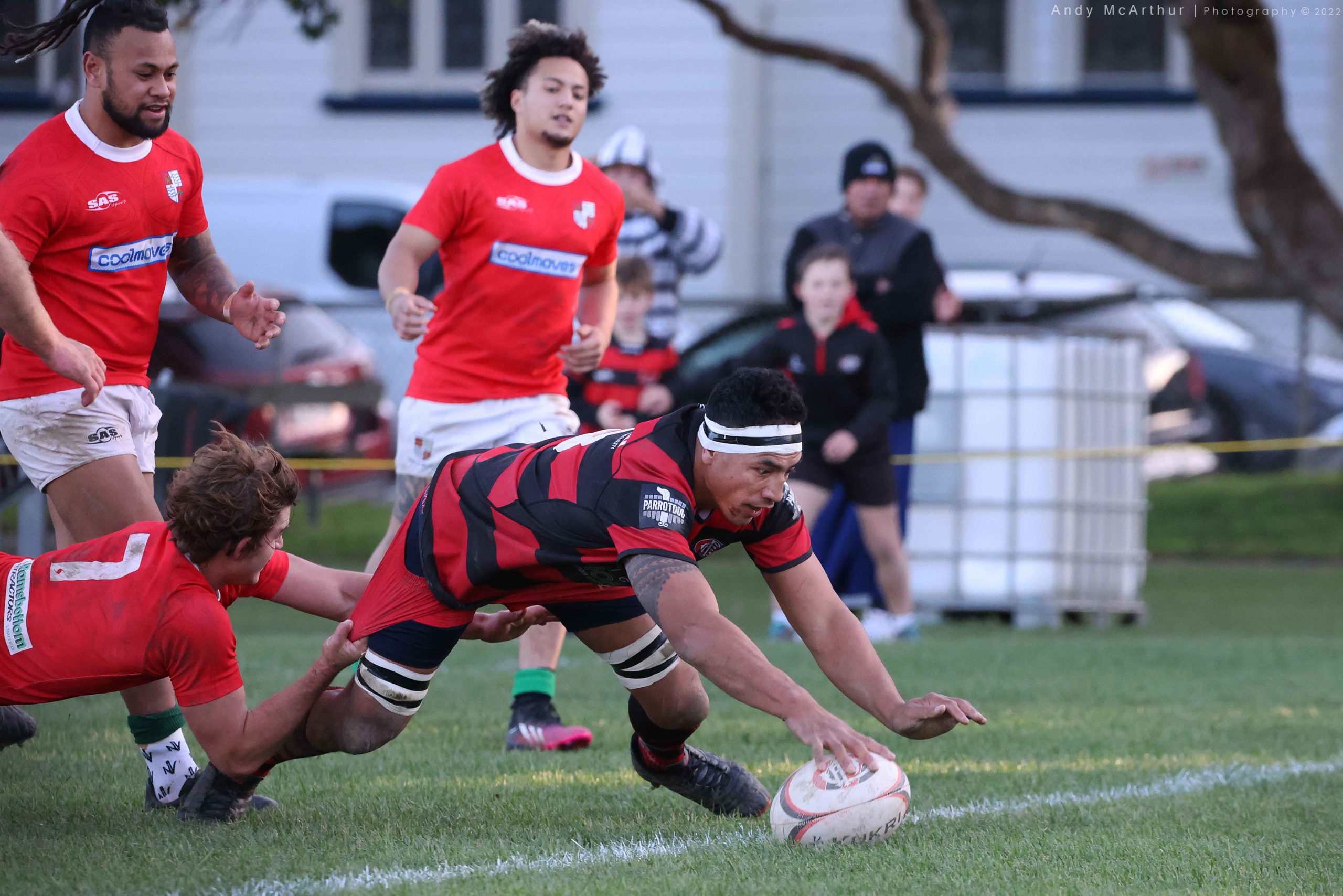 Updated Sunday Morning: The 2022 Swindale Shield is seemingly Petone’s to lose, after beating the Avalon Wolves 52-19 for the Morgan Family Trophy and for a bonus point competition win on a blustery but mostly dry afternoon of club rugby in Wellington today.

Petone have moved to 45 points on the standings, with winnable games against lower ranked contenders Johnsonville and Wainuiomata to come in the final fortnight of the first round Premier competition.

But breathing down their neck are Poneke on 44, Hutt Old Boys Marist on 40 (which could be 45 after this Wednesday’s catch-up game against Johnsonville) and Old Boys University on 41 who also all had bonus points win today, albeit all in differing circumstances.

Despite a second half scare, the Hutt Old Boys Marist Eagles forwards and clinical style of play paved the way for their 51-33 win over the Upper Hutt Rams at Maidstone Park.

On a day of generally high scoring, Northern United are fifth on 36 points after beating an understrength Wainuiomata 62-14 for the Alf Keating Memorial Cup at Porirua Park, and Oriental-Rongotai are sixth after their second half take-down of Tawa and 29-28 win at Lyndhurst Park.

Paremata-Plimmerton were also significant winners in today’s 11th round, beating Johnsonville 25-17 at Ngati Toa Domain. Like Johnsonville, the Hammerheads have a catch-up match this coming Wednesday night (against Tawa) and have everything to play for to try and secure a Jubilee Cup spot in their remaining three matches of the first round.

One notable result from the lower grades that was anything but high scoring today was the Trentham Memorial Park U85kg JC Bowl clash between the Upper Hutt Rams and Stokes Valley. The Rams won this won 7-6 to remain unbeaten and stay at the top of the table on 32 points, ahead of Stokes Valley and Johnsonville who are both on 29. More on lower grades below.

In some around the grounds Swindale Shield action, talisman Poneke No. 8 and captain Galu Taufale’s two second half tries were telling plays in his side’s win over Marist St Pat’s.

Poneke had led 17-12 at halftime after first five Pakai Turia crossed the line after an attacking scrum, after MSP had held a narrow 12-10 advantage with two tries including the first of the match to Hurricanes U20s fullback Chicago Doyle after a run and offload by first five Andrew Wells.

The first 15 minutes of the second half were as tight and willing as these clashes always are, until Taufale scored his first try and Hurricanes U20 halfback Sam Howling converted to see them go up 24-12. Five minutes later Taufale scored again and Howling added the extras and Poneke now led MSP 31-12.

Would this be enough? MSP struck back through No. 8 Josh Naa, with Wells converting this try and then adding a penalty to close the gap up to within striking distance. Wells scored a try himself with a few minutes to play to make it 29-22, but Poneke clung on to win and keep alive their Swindale Shield title hopes.

At Ngati Toa Domain, the Paremata-Plimmerton Hammerheads hung on throughout the second half into the wind to hold off the Johnsonville Hawks.

Johnsonville struck the game’s opening blow when livewire fullback Jacob Walmsley was tackled without the ball and they were awarded a penalty try.

Pare-Plim hit back to make it 7-5 to Johnsonville after about 15 minutes when No.8 Mellenniumma Leota broke from an attacking scrum and wing William Teleaga crossed the whitewash.

Set-piece pressure led to Pare-Plim’s next try, their scrum working well and then their lineout from a throw-in on the 22. The forwards got a good rolling maul on and then unleashed centre Joe Faleafaga who score in the left-hand corner. This made it 10-7 to the home side after 25 minutes.

Pare-Plim’s lineout was to the fore for their third try after 35 minutes, the Hammerheads scoring a try from a good drive in the corner. They went ahead 20-7 on halftime with centre Faleafaga helping set up wing Teleaga wo crashed over for his double. They almost went ahead further right on halftime but lost possession hot on attack.

Needing to strike first after the interval, Johnsonville did so, replacement forward Ben Cathro crashing over after a lineout turnover to close the score to 20-12.

The match became a battle of attrition throughout the middle stages of the second half, with lots of penalties against both sides and a long injury break dominating play.

With 15 minutes still to play, Johnsonville scored their next try to close the margin to 20-17 with a great individual try to fullback Jacob Walmsley. Like all the tries in the game to date, the conversion was missed.

The Hawks had their tails up, but were unable to break through against committed home-team defence. Johnsonville had a chance to kick a gimme penalty moments before the end that would have drawn the contest but chose to go for the try and couldn’t do so.

Instead, it was the Hammerheads who had the game’s final say right at the end – and denied the Hawks a bonus point –  with expressive halfback Esi Komaisavai regathering a kick and chase and scoring their fifth unconverted try of the match in the corner.

Players to stand out included Pare-Plim No. 8 Leota, halfback (come fullback and right wing) Komaisavai and centre Faleafaga. For the visitors, No. 8 Sam Green, centre Aukuso Tuitama and fullback Walmsely all gave it their all in a losing cause.

At Lyndhurst Park, home side Tawa were into the game from the opening whistle and they went ahead 10-0 early, which they extended to an ominous 20-5 lead with the first half closing in.

Ories scored a clutch converted try just before halftime to go to the turnaround trailing 12-20, and then sensationally went bang-bang after the break to move ahead 26-20. From there, they were able to hang on, a solitary Steven Va’a penalty enabling them to hang on.

Steven’s brother Reuben scored two tries and fullback Ethan Webster Nonu  and No.8 Peteli Poasa one each for the Magpies.

At Fraser Park, Hurricanes U20s centre Riley Higgins marked his return to the competition by scoring four tries for Petone in their half century posting of points against the Avalon Wolves. Halfback Cam Ferreira scored two tries and centre Lester Maulolo and lock Dylan Williamson one each. Petone led 33-5 at halftime.

Hutt Old Boys Marist beat the Upper Hutt Rams 51-33 at a windy but dry Maidstone Park. The home side Rams were up against it at halftime after the Eagles had run in their fifth try just before the interval to take a 29-12 lead turning with the wind in their favour.

But the Rams had other ideas, coming right back into the contest with two tries to trail 29-26, and it was game on.

The visitors scored again but so did the Rams and it was 36-33 with about 15 minutes to play.

However, the Eagles had a definite edge up front, and in particular a dominant scrum, and this helped them pull clear over the remainder of the match.

The Rams never gave up, and their exciting young No. 8 Toby Crosby scored a popular last try for them.

In the last 10 minutes, HOBM increased their lead through a penalty and a try in the far left corner after another long build-up and about 20 phases of pick and go play by the forwards, and to replacement forward Jason Hoffman on fulltime.

Earlier, the Eagles had started the match positively, building pressure, and blindside flanker Matt Sleith helped propel Hurricanes hooker James O’Reilly over to scored the opening try. This clinical, patient style of play was to be the Eagles’ pattern throughout the remainder of the first 40 minutes and for much of the second half.

However, for their part, the Rams were nothing but tenacious, and they scored two runaway tries in the first half, one from a quick tap penalty and kick ahead by openside flanker Dan Schrijvers that centre Todd Svenson showed good toe to run on to, and the other from an intercept to first five Scott Svenson.

The Eagles’ other four tries in the first half were scored by Hurricanes hooker James O’Reilly, first five Anthony Utanga, No. 8 Mika Alaifatu, and left wing Fritz Rayasi who scored right on fulltime.

There were Division 2 Women’s semi-finals today at Fraser Park and William Jones Park, where the home teams Avalon and Wainuiomata won well and will contest next week’s Izzy Ford Cup final.

Avalon held a healthy lead at halftime, after the first half included a heavy shower of rain that soon cleared to fine conditions for the rest of the match. Pare-Plim scored first in the second half, but from there on it was one-way traffic for the She-Wolves.

Highlights of the second half for Avalon were long-range individual tries to Awatere and first five Kobe O’Keefe.

Wainuiomata accounted for Poneke 48-15 in the other Women’s Division 2 semi-final.

It was the final round of the Women’s Division 1 Tia Paasi Cup competition, with Marist St Pat’s beating Norths 24-19 and Petone also causing a minor upset by beating Ories 34-10.

MSP held on to their lead over the final 15 minutes against Norths, with the game finishing by Norths turning over a Norths lineout  inside their territory and kicking it out on fulltime.

Ories scored the game’s first try against Petone to centre Bernadette Robertson and two in the first half and it was 10-10 at halftime. But Petone sailed to victory with four unsewered tries in the second spell of play, with left wing Sarahcen Oliver scoring two of these.

The opening round of Men’s Premier 2 contests saw Poneke take the only bonus point win of the day in the Division 1 Ed Chaney Cup competition.

Poneke beat MSP 35-7, while Tawa kept their unbeaten run alive with a  17-5 win over Ories in the early game at Lyndhurst Park, Norths and OBU drew 29-19 at Porirua and newly promoted Avalon pushed the HOBM Eagles second side all the way before missing out 22-24.

After last weekend off toasting the Queen, the Colts and U85kg grades resumed with gusto.

Defending Colts champions Old Boys University Green were the day’s biggest Colts winners, accounting for Avalon 62-0.  Paremata-Plimmerton beat Poneke 52-0 in another satisfying victory. In other matches, Petone beat Tawa 38-22 and the Wellington Axemen Colts had a good 31-15 win over MSP. The HOBM-Wainuiomata Colts match was deferred, while Johnsonville had the bye.

As reported above, the UH Rams U85kgs came out on top of Stokes Valley in a low scoring one-point thriller at Trentham.

In Premiership College First XV contests this afternoon, St Bernard’s pushed St Pat’s Town close, before going to them 33-28 in their match that was played at the Polo Ground. St Bernard’s held the lead right to the end when Town pressed late and scored the winning try. Both sides were also left to rue poor discipline, with three yellow cards and plenty of penalties throughout.

Wellington College made it three from three by beating Wairarapa College 45-14 in their match that was shifted to MacAlister Park, while Scots beat neighbours Rongotai College 46-10 and St Pat’s Silverstream defeated neighbours HIBS 50-3. Mana College had the bye.

The Premiership resumes on Wednesday with Silverstream hosting Wellington College in their traditional.