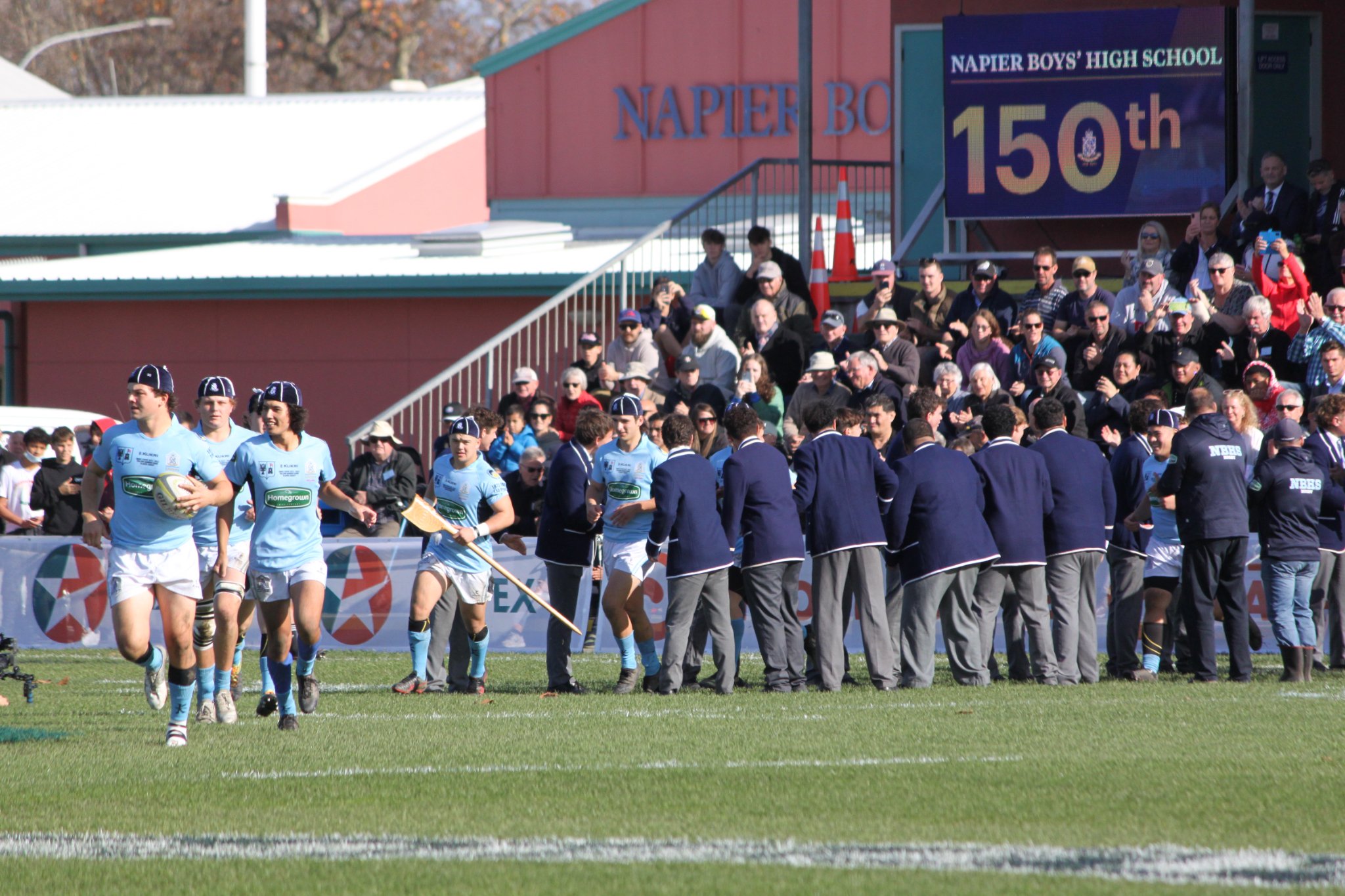 Max Radcliffe runs out with his team at the start of their recent Polson Banner match against Palmerston North Boys’ High School. PHOTO: Natalie Woelfel.

Napier Boys’ High School is celebrating its 150th Anniversary in 2022. Rugby has been an integral part of the school fabric with the First XV existing before the Hawke’s Bay representative team.

Only Hamilton Boys’ High School can match the number of appearances (11) that Napier have made at the National Top Four tournament. Napier have held the Moascar Cup in 1972, 1984, 2002, 2003 and 2018. Old boys of Napier include All Blacks, Richard Turner, Brad Weber and Greg Somerville.

The most prestigious fixture in Napier’s calendar is the Polson Banner. Presented by Headmaster, Mr A S Polson, the banner is contested for in the annual match against Palmerston North Boys’ High School. The winning team has the year of their success denoted on the banner. The tradition has been going since 1904.

Typically the match is in the last round of the Super 8 but it was brought forward to Queen’s Birthday Weekend to coincide with the 150th celebrations. Every Napier player was presented with and allowed to keep a special jersey marking the occasion.

In front of a bumper crowd of more than 2,000 spectators, Napier won a spectacular match 22-18. The winning try happened in the last play of the game from a rolling maul and resulted in a crowd invasion.

Max Ratcliffe is captain of Napier. The No.8 captured the drama.

“Gus Brown, our number three jumper, got the ball. I was a front lifter blocking the Palmy drive. Our whole forward pack came together and when we had a strong set the backs joined in. I didn’t see the ball grounded, my face was in the dirt but it was amazing when our supporters ran on the field and were jumping around. It’s a memory I’ll cherish forever.”

The winning try was scored by Angus Prouting. With multiple bodies involved in the push to the line, the chances of a held up call are high. Did Ratcliffe consider a scrum or tap?

“The driving maul is a huge part of our play. It’s gone well in other games this season and in the second half against Palmy we milked a few penalties. They sacked our drive a few times and we were trying to get a yellow card. That didn’t work out but the drive at the end was awesome.”

Napier made an awesome start when centre Adam Curran dashed 60-metres for the opening try.

However, Palmerston North was able to claim the lead following a lack of Napier discipline. A penalty goal to fullback Sam Coles and try to hooker Eli Oudenryn had the visitors ahead.

Napier second-five Sam Kanthavong pushed Napier back in front, but Palmerston North would prove to be stubborn opponents.

“Palmy played with a lot of heart. They were very physical, desperate to take the banner and deserve a lot of credit.

“There was a lot of pressure because the jubilee weekend was based around the game. We had a flu outbreak which knocked us around.

“We had to find a second wind. The will to do the best for those who have come before us and the crowd helped us do that.”

Ratcliffe is in his third year in the First XV. His poise is proof of a team growing in confidence. A pre-season defeat to King’s College, Auckland is the only setback Napier has suffered.

“That was a great result. We’ve got a lot more depth this year. There are a few boys in their third year and they’re connecting better than they have done in the past.”

Max’s father Brendan Ratcliffe is the coach of the First XV. He is the CEO and founder of the Rugby Site, an innovative rugby coaching site which features tutorials from leading internationals like Riche McCaw.  His professional career began in 1992 as Rugby Development Officer for the Hawke’s Bay Rugby Union before seven years in a similar role for New Zealand Rugby. Professionally he coached Northampton Saints and Hawke’s Bay.

“Dad pushes me hard, and is quick to remind me things aren’t going to be given to me on a silver plate. I’d love to pursue rugby as a career but my main focus is to get a qualification. I enjoy the sciences, geography and history.”

This weekend Napier will add another chapter to their history of rivalry against Gisborne Boys’ High School which stretches back to 1911.

“Gisborne will be a physical game and they’ll have some fast backs. Our goal is to improve each week and if we can do that we’ll be in the hunt in most games.”