Skip to content
You are here
Home > Club Rugby > Pioneers of Rugby in Wellington: 016 Fred Roberts and Jim Moffitt 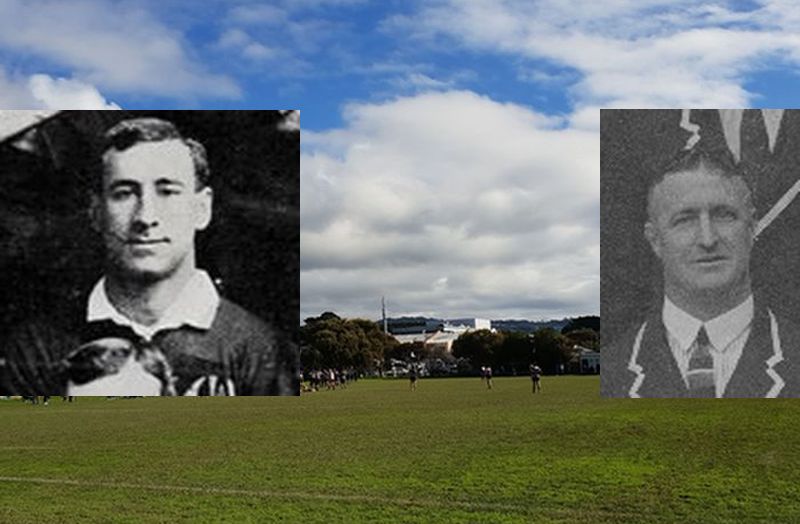 From their inception in 1888 through to their amalgamation with Rongotai Old Boys in 1967 to form Oriental-Rongotai, the Oriental club produced five All Blacks.

Of these, Fred Roberts and Jim Moffitt were true stalwarts of their clubs and the local game.

In 1905 Oriental finished runners-up in five of the six grades that they had teams entered in. In 1908 the Senior A team again finished second, faded in 1909 because of injuries but bounced back to win the Senior Championship in 1910

Their game was built around a swift set of backs – marshalled by halfback Fred Roberts. A member of the 1924-25 Invincibles, he was the All Blacks captain in Australia later in 1910.

Wellington’s first great halfback, Fred Roberts, played in Wellington’s first Ranfurly Shield winning team against Auckland in 1904 and between 1905 and 1910 he played 52 All Blacks games including 12 Tests (three as captain). He played 58 matches for Wellington between 1901-1912 after originally playing soccer for two years after leaving school.

Roberts later featured administratively for his club, having a long involvement in Oriental’s club committee and serving as a Wellington selector during the 1920s. He passed away in 1956, aged 74.

Moffitt donned the Wellington representative jersey over a period of 11 years and was active in Senior A club rugby over 17 seasons (interrupted by the war).

He started at the St James club for four years between 1910-1913, where he teamed up with another All Black, Teddy Roberts and Teddy’s All Black father Harry Roberts (not related to Fred Roberts) who was the coach to finish second in the 1911 Senior Championship.

By the early 1920s, lock-forward Moffitt was back home and was Oriental’s leading player and their fortunes often rested on his shoulders. Few match reports of their games fail to mention his name and was the difference in many epic battles against his contemporaries.

In 1922 he was injured at least twice during the season and appears to have played some weeks with a broken thumb such was his teams need for their captain to be on the field with them.

In 1926, in his final season, Oriental went the closest to winning the Senior Championship since their 1910 triumph. They went through the first round unbeaten, but an inexplicable 45-6 loss to University in their next game ended their run.

Moffitt made 46 appearances for the Wellington Senior A side, between 1910-1914 and again between 1920-1926. He was in Wellington’s side that lifted the Ranfurly Shield off Taranaki just prior World War 1 that locked it away for seven years.

He made the All Blacks in 1920 and played in nine of the 10 matches on their Australian tour. He was selected for the All Blacks again in 1921 and played in all three tests in the historic drawn series against the Springboks, including playing in the 0-0 second test at home in Wellington.

Moffitt was the only member of his family featuring in Wellington club rugby over many years. His brother Joe Moffitt was a leading referee of the time, who also controlled a number of first-class matches in the 1920s and 1930s.

As well as Roberts and Moffitt and the other three All Blacks, Oriental also had Bill Chambers who was a New Zealand Māori representative in 1929.

Two Oriental clubmen also managed the All Blacks in the 1920s.

Ernie Little was All Blacks manager in 1924 to Australia and Bill Hornig managed the national side on their 1928 tour to South Africa. Both were veterans of the 1910 team with Little being the coach and Hornig being the treasurer.