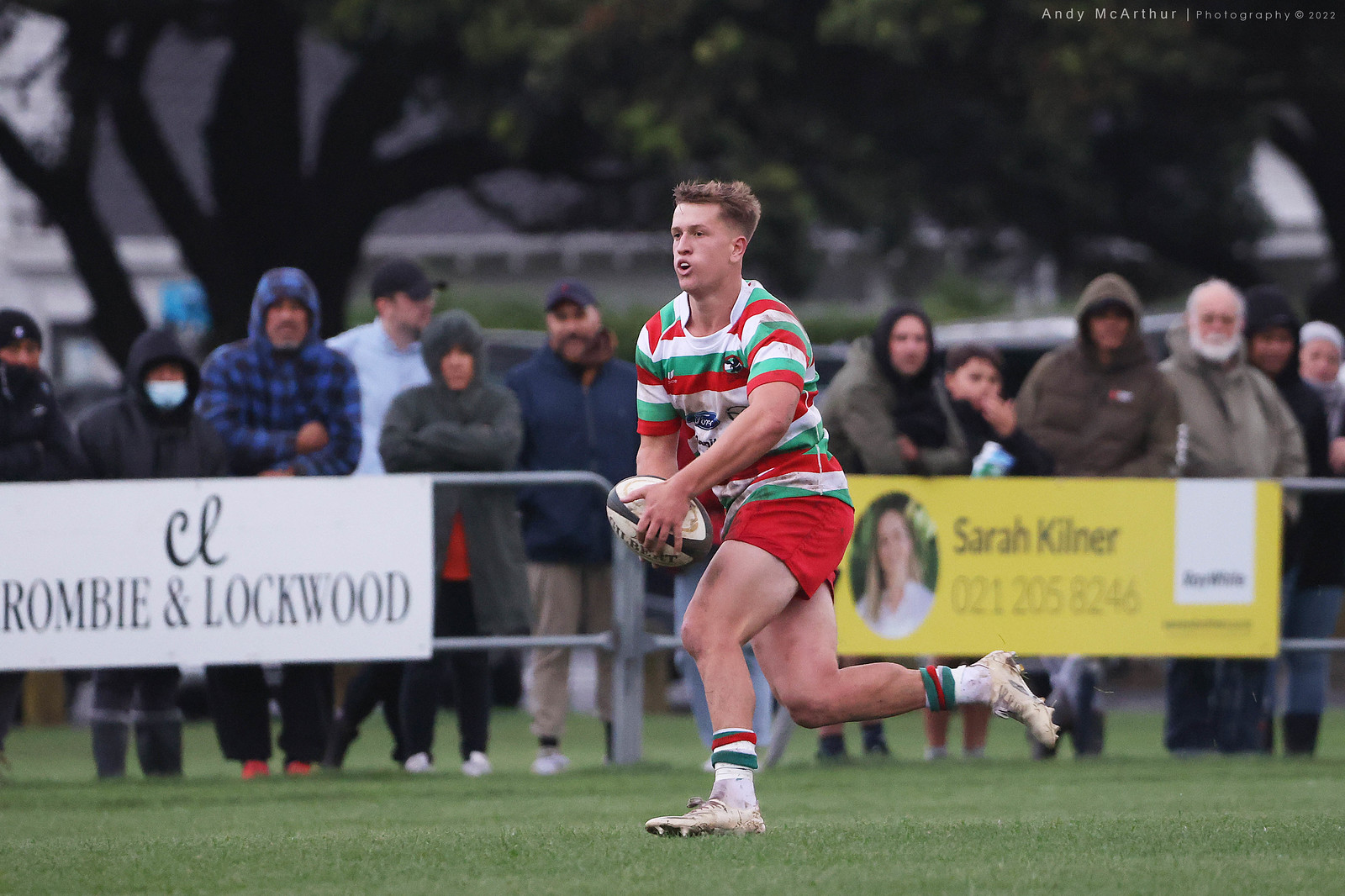 Agile and astute, Zane Ainslie has been one of the best performed fullbacks in the Swindale Shield.

He has been a key strike weapon for Hutt Old Boys Marist who are third in the standings, losing just two games by a combined margin of 11 points, and as it stands have a game in hand with a midweek catch-up fixture against Johnsonville set down for next Wednesday night.

On Saturday he returned to his former club Wellington. He only played 18 minutes for the Axemen in 2021.

“I broke my arm in round one against Poneke. Greg Foe got a runaway and I collided with him and got a concussion,” Ainslie lamented.

“I stopped the try but when he landed on me I was done.

“It was really tough mentally because I’d trained all summer and felt 2021 was going to be my breakthrough year. You see more on the sidelines than what you do in the game. It was tough seeing things you couldn’t influence.”

Hungry for representative honours, Ainslie was influenced to move to the Hutt Rec by his “best mate” Oakli Wilson-Tiotio.

“He’d ring me after each game bouncing off the walls. Hearing that and the family oriented culture at Hutt was something I needed.

“Having the likes of Wellington Lions Connor Collins and Brandyn Laursen to feed off at Hutt has really helped my game.”

Ainslie has played every game for the Eagles this year and scored eight tries. Against Norths and Avalon he even slotted six conversions and two penalties. On Saturday against the Axemen he scored a hat-trick and kicked four conversions for 23 points.

After 10 rounds (nine games for the Eagles), he is the joint leading try-scorer in the Swindale Shield this year with eight tries, alongside Aukuso Tuitama (Johnsonville), Niko Patelesio (Wainuiomata) and Reuben Va’a (Ories).

He identified the 43-14 win over Tawa in Round 4 as an exceptional performance while  Poneke who beat HOBM 29-25 a fortnight ago are a side with “tough defence” and an “outstanding midfield.”

Scoring a runaway try against Tawa earlier in the round. Footage: Mike Lewis.

What about McBain? HOBM led Petone 20-5 and lost in the 84th minute.

“It was tough seeing the winning try go viral. You can see me in the clip absolutely flying. I reckon if I had another ten-metres I would have caught Sam (Blackburn). The reason I was so far behind to start with was because I was celebrating. I thought Brayden’s drop kick went over but credit to Tupou Sopoaga. That was an outstanding charge-down. That’s McBain.

“It’s a very close, physical competition this year. Playing numbers are down, but that’s made things closer. Sometimes it feels like a grand final every week.”

Crossing on debut for HOBM against Norths in the opening round of this season. Ainslie has scored eight tries in nine games for the Eagles this year and been a key member of their back division. Footage: Club Rugby.

Ainslie was born in London and raised in Somerset. He moved to Waikanae when he was seven. His English father Cam is a self defence teacher in the police, Welsh mother Tina is a teacher.

Zane attended Kapiti College where the First XV flourished under the tutelage of Mark Tooman. In 2017 they won four matches in Premier I, including a 19-15 upset of 2016 semi-finalists, Rongotai College.

“We were the only side to beat them so they started scouting our players. We had one boy go over there and he killed it. The next season their coach rang our coach and said ‘were looking for a first-five/fullback’ so I was on my way.

“I spent 2018 and 2019 in England and it was very different. They’d never kick for the corners from penalties and though there are some gym junkies they don’t grow up smoking each other so I found it less physical.

“Our team had a good season. We won most of our games and nearly beat Blundell’s School which is a very prestigious school.”

Paremata-Plimmerton, coached by Mark Tooman, helped Ainslie grow significantly. Though the Hammerheads didn’t win often, Ainslie managed 14 games in 2019 and 2020, settling upon fullback as his preferred position. He grew up playing a lot of first-five.

“I went to the Axemen to team up with Isaac Bracewell but that obviously didn’t work out. I like fullback. You see a lot more of the game and have the chance to put teams under pressure by kicking behind them and slotting into gaps where you see them. I’m not as quick but I try to model my game on Will Jordan.”

This weekend Hutt Old Boys Marist travels to Maidstone Park to battle Upper Hutt in Round 11 of the Swindale Shield, ahead of their scheduled midweek catch-up match next Wednesday against the Johnsonville Hawks.