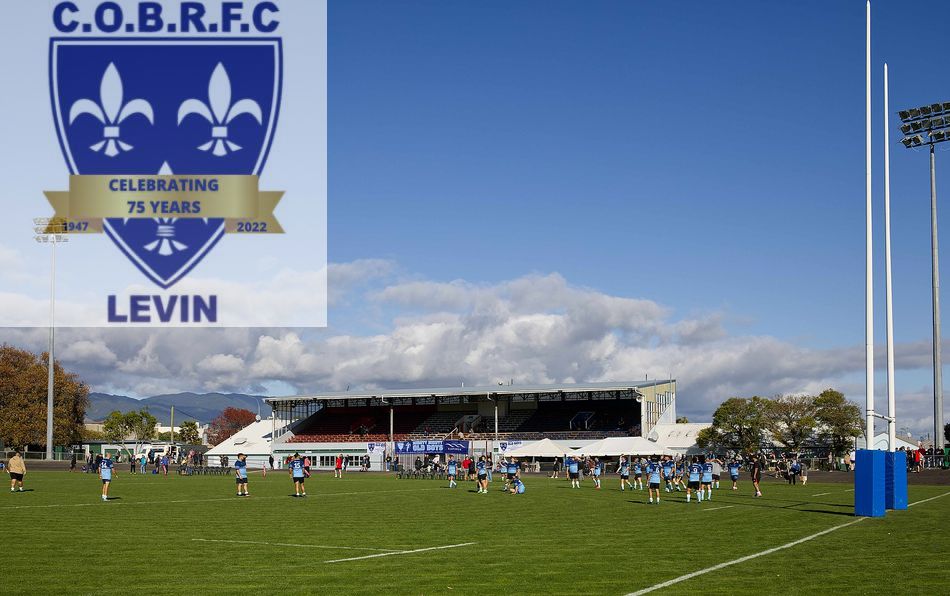 The College Old Boys Rugby Football Club held their 75th Jubilee Celebrations this past weekend. The three-day celebration started with a Black-Tie Dinner on Friday night at the Levin Memorial Hall and continued through to Sunday.

Saturday saw a full day of rugby at the Levin Domain. starting with junior grades matches and then moving to a festival match between the COB Barbarians and the COB Invitational Teams, then a Premier Competition game between COB and Rahui – which COB won 19-17.

COB has won the Premier grade on four occasions, 1955, 1964, 1993, and 1994. College Old Boys created a new record for the Senior Reserve grade in 2020 when it became the first club in the Horowhenua Kapiti Rugby Union’s history to win the grade four times consecutively. Between 2009-2021, the Senior Reserve side was in nine Finals and won five titles.

An integral part of College Old Boys is their Pasifika Culture. This started back in the late 1980s. COB were struggling to field a team until one training night an old Transit van pimped out with purple oval windows pulled up, out jumped Tupou Mahuinga who asked “do you want some players” to which YES was the answer, then out came a continuous flow of Tongan brothers. These boys came with their unique hardstyle of playing rugby which caused coach of the time, Roger Downey to spend a lot of time at the juridical committee.

Roger jokes that he spent so much time there that they gave him the job of running the juridical committee, a role he retains until this day.

Many COB Pasifika players that have represented Horowhenua Kapiti from Siela Nau and Moses Lomu at the start through to stars of today like Willie Paia’aua who also played for the NZ Heartland team. Tupou’s nephew Paula Mahuinga, was elected President of the club in 2020 , the first Pacifika President of COB. Paula first came to COB with his Dad Halafihi, as a young boy to training and used to run around and train with the players. Every year the club honours our Pasifika Brothers and Sisters with our Pacifika day which is a game day dedicated to the Pasifika people with culture, food and music throughout the day. In the last couple of years, COB have adopted that Pasifika food is served at every home game.

In the early 2000s, COB fell on tough times. The club is forever indebted to a small band of volunteers who refused to let the club close and worked tirelessly to keep the club alive. Unfortunately, the club was not able to field a team in 2007 at all. The Committee and Coach Aleni “Lang” Feagaiga fought to re-establish the club.

In 2008, Aleni brought together a team to compete in the U21 grade in Palmerston North. The team enjoyed some success during the season, making their way to the final, and going undefeated before falling short in the decider. Many players from this year’s group have moved through the grades, also now being a part of the club in non-playing roles. This group are affectionally known as “Lang’s Babies.”
COB’s “Young Blood” Committee is proud to be cultivating the Family Club Vibe from the Junior Space through to the Seniors and supporters.

Last year on Old Timers’ Day, the club had its largest reported bar turnover in club history. Another highlight in COB’s season calendar in 2021 was their first ever Junior 7s Tournament. COB proudly hosted teams from all around the lower north island which included over 700 children and their families. This Junior 7s tournament was the largest in our area and raised just over $3,500 for the juniors.

Looking to the future COB has many new and exciting initiatives coming up including the completion of their bathroom upgrade – supplies kindly donated by Bunnings Grassroots Rugby Initiative.