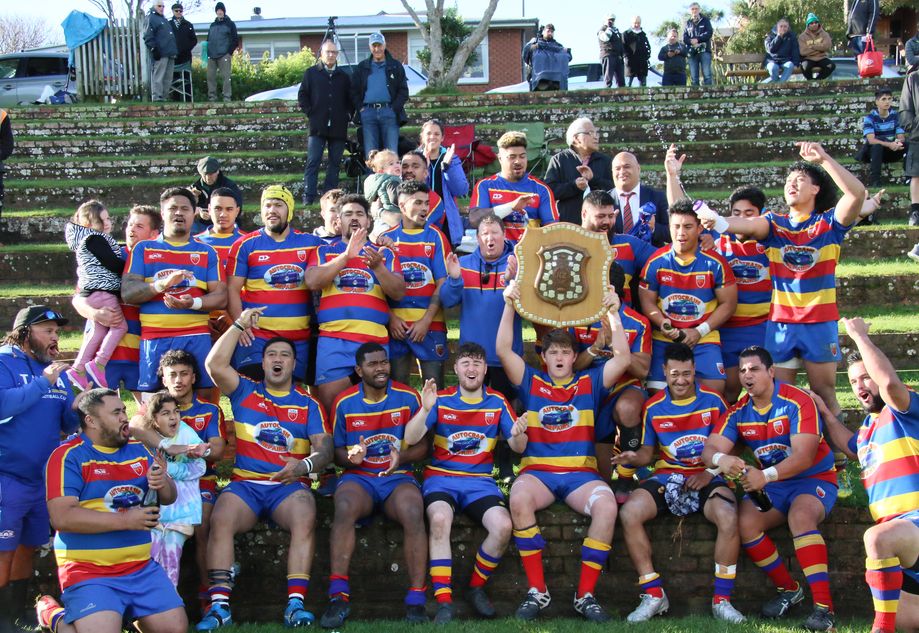 Tawa’s second team with the Harper Lock Shield, which they won with a round to spare last Saturday but were presented with it today on the terraces at Nairnville Park following their 22-22 draw with Old Boys University.

Results and scoring (as received) HERE

Petone remain the competition leaders but have had their lead cut to a solitary point on the Swindale Shield standings*, after drawing with Tawa 21-21 in bright sunshine at home this afternoon.

Petone are on 40 points on the log, ahead of Poneke on 39, who won a death-knock victory over the Upper Hutt Rams at Maidstone Park in their Alby Makeham Shield match. Replacement debutant wing Wade Woolly broke Rams hearts by racing over to score the match-winner in injury time for a 26-24 win.

Tawa and Norths are next on 31 points, following Tawa’s draw with Petone and Norths’ 34-26 win over Marist St Pat’s for the Maurice Standish Cup at Jerry Collins Stadium.

MSP on 31 and Oriental-Rongotai on 30 round out the top eight on the Swindale standings, with Ories beating Paremata-Plimmerton 42-24 at Kilbirne Park.

Johnsonville and Paremata-Plimmerton are ninth equal on 23, followed by the Upper Hutt Rams on 16, Wainuiomata 14, Avalon 12 and Wellington 1.

Avalon earned their second win of the season today at William Jones Park, beating Wainuiomata 29-25 for the Anthony Waldrom Cup.

*HOBM, Tawa, Johnsonville and Paremata-Plimmerton have played one fewer match than the other 10 teams. All four were awarded 3 points from earlier round-robin matches involving each other that didn’t go ahead because of Covid. The HOBM v Pare-Plim and Tawa v Johnsonville game could both still go ahead as catch-up mid-week games in the next three weeks.

Around the traps, Petone and Tawa contested a dogfight of a match in which neither side gave an inch for 80 minutes.

Visitors Tawa’s big pack and astute kicking of Trent Renata steered them around the park as Petone held a 10-8 halftime lead. Tawa came back to hold a narrow advantage, but the boot of first five Carne Green with three penalties and a conversion saw them take the draw. Left wing Mason Henry and reserve loose forward Bradley Pritchard scored Petone’s two tries.

Poneke started and finished the match with a hiss and a roar. They scored their first try in the second minute to right wing Psalms Latu, converted by first five Pakai Turia.

The Rams replied with two unconverted tries in the ninth and 16th minutes to go up 10-7. They extended their lead to 13-7 just before halftime with a penalty. They also missed out on scoring another two tries through knock-ons near the whitewash.

Poneke inched ahead by a point when halfback Jordan Hoerara scored a converted try 10 minutes into the second spell, but the Rams scored their third try to go up 18-14.

The lead changed twice more before the end, with the replacement Poneke midfielder Caleb Robson crossing for a seven-pointer to put his side in front 21-18, followed by consecutive Rams penalties to see them in front 24-21 before Wolley’s late heroics for the Streetkids.

Staying in the Hutt Valley, a 14-player Avalon also got up late to beat Wainuiomata.

With fullback and earlier try-scorer Moomoo Falaniko in the sin-bin, replacement hooker Tufi Tufi scored the match-winner for the Wolves in the 79th minute.

In a not dissimilar pattern to the Maidstone Park thriller described above, Wainuiomata were fast out of the blocks and fullback Derek Lealiifano scored a try that was converted by debutant halfback Jacob Renor to put the home side up 7-0.

Lock Jarimar Schuster then found the whitewash and Wainuiomata were up 12-0 inside 10 minutes.

The Wolves hit back through centre Pena Sione-Leota, but Renor kicked a penalty to make it 15-7. Avalon scored through fullback Falaniko but there was no further scoring for another half an hour.

The drought was broken by consecutive Avalon tries to Tufi Tufi (his first) and No. 8 Chris Lafaele and Avalon led 24-15 heading into the final 15 minutes.

Next it was Wainuiomata lock Schuster who crossed for this second try, converted by Renor, who then slotted a penalty to give the green and blacks a 25-24 advantage – before the Wolves scored at the end through Tufi to take the win.

With Jackson Garden-Bachop in the flyhalf position, Norths scored two converted tries to go up 14-0 after five minutes.

MSP first five Andrew Wells kicked three penalties and his side closed the gap to 14-9.

MSP scored first in the second half with a seven-pointer to fullback Ryan Setefano, but when Garden-Bachop offloading to fullback Johnny Teleaga to score their fourth and bonus point try, Norths went up 28-16.

MSP scored their second try, this one to hooker James Tuia, but Norths edged ahead again through penalties and stayed in front to the end to register their third consecutive win.

At Kilbirnie Park, it was the Va’a show for ‘home’ side Oriental-Rongotai, right wing Reuben scoring four tries and his brother Steven one and kicking 12 points on top of that in Ories’ 42-24 win over Paremata-Plimmerton. Centre Malachai Unasa, in his 50th match for the Magpies, scored their other try.

At a sun-kissed Nairnville Park, Old Boys University beat a spirited Johnsonville 41-26 in a lively fixture.

OBU won six tries to four after leading 22-14 at half time. OBU won the big moments of the game, while Johnsonville failed to make all their chances pay. A case in point was OBU’s final try that clinched the match, second five Callum Harkin spoiling Johnsonville ball at the back of the scrum and running 40 metres unopposed to score in front of the cricket nets to bring up his 100th point of the season. Harkin converted his own try and OBU had the game in the bag at 41-14.

This try, however, came moments after Johnsonville had created a near chance but left-wing Zyrus Grace was kept out from scoring in the carpark corner.

Johnsonville wouldn’t lie down and replied to Harkin’s match-winner two of the game’s most entertaining tries. Both involved livewire fullback Jacob Walmsley who scored the first of these tries, and was involved in the next one scored by Aukuso Tuitama.

Earlier, OBU had opened the scoring with a try to strapping left wing Owen Wright following a minute-long build-up from a scrum on halfway.

Johnsonville hit back with an excellent try to first five Levi Grace, slicing through defenders in the 22 after fullback Walmsley had handled twice in the lead-in. The conversion by halfback Mark Sutton put Johnsonville ahead 7-5.

OBU then replied with two tries and a penalty to move ahead 22-7 just before halftime.

The first of the tries was scored by second five Harkin after an individual run, and the second was scored under the posts by halfback Kyle Preston, after receiving an inside pass from right wing Reece Plumtree after a minute of phase play started at a lineout near halfway.

Just before the break Johnsonville scored their second converted try, to left wing Grace after another break by fullback Walmsley.

Johnsonville also lost their No. 8 Sam Green to injury in the 30th minute, a blow to them.

The Hawks started the second half strongly but OBU ultimately weathered a fierce storm. After a two-and-a-half-minute build-up, Johnsonville went desperately close to scoring the opening try of the half, but OBU held them out in the corner.

OBU’s reply was to strike back with two consecutive tries, to openside flanker Josh Gimlett and replacement flanker Oskar Lynch. This gave OBU a 20-point buffer heading in to the final 20 minutes.

Close results were the order of the day in the last round of the Premier 2 Harper Lock Shield.

Winners Tawa saw their winning streak come to an end, held 22-all by OBU in the early game at Nairnville, HOBM squeaked home 33-31 over Poneke at Kilbirnie while the margin was razor thin at Maidstone with Ories holding out relegated Upper Hutt 36-35. The fourth result saw Norths get home comfortably 51-17 over MSP at Porirua Park.

Tawa led OBU 22-5 at halftime, but OBU came back in the second half with two converted tries to close the gap to 22-19. With 10 minutes to play, OBU kicked a penalty to make it all square at 22-22. Tawa came back in the final several minutes, first five James So’oialo missing a penalty and then failing to reel in a low pass out wide with the tryline beckoning.

Tawa were presented with the Harper Lock Shield on fulltime.

In the Division 2 National Mutual Cup the interest was if Avalon could do enough to win the trophy and promotion. That they did, beating Wainuiomata 15-0. Elsewhere Pare-Plim got their first win on the field, edging out Stokes Valley 29-26, and Johnsonville beat Wellington 41-0 under lights last night

The Women’s competition took yet another twist with Norths following up their win over Ories three weeks ago with another, winning 43-10 at the Polo Ground.

MSP were the other winners in the Tia Paasi Memorial beating Petone 35-17 on Kilbirnie Park.

In the Izzy Ford Cup Avalon made it three from three with a 38-34 win over Wainuiomata, with Poneke running in five tries to two in beating an undermanned Pare-Plim 25-12 at Ngati Toa. The top four conclude their round-robin next week, with the Division 2 sides moving into the first semi-finals of the year.

The established pecking order of the College Premiership got a shake-up today as well.

The eye-catching result of the day was out at Strathmore, where Wellington College beat Scots 18-17 to remain unbeaten after two rounds, along with St Bernard’s who beat Mana on Wednesday. First five Stanley Solomon kicked a death-knock penalty to give his side victory. Hutt International got on the board with a 27-24 win over Rongotai in Trentham, while St Pat’s Town pulled away from Wairarapa College after halftime to win 51-10.

In Premier 2 perennial contenders Upper Hutt and the Silverstream 2nds were both winners: Upper Hutt won 26-15 over Taita and Silverstream saw off their WC counterparts 36-5. In the other matches Bishop Viard beat HVHS 40-17, Aotea had a similar margin winning 41-15 over Naenae, and the Town 2nds were 20-18 winners over Paraparaumu.

The Levin College Old Boys club held their 75th anniversary celebrations today – the four clubs involved in the celebrations below. More content from this to come.