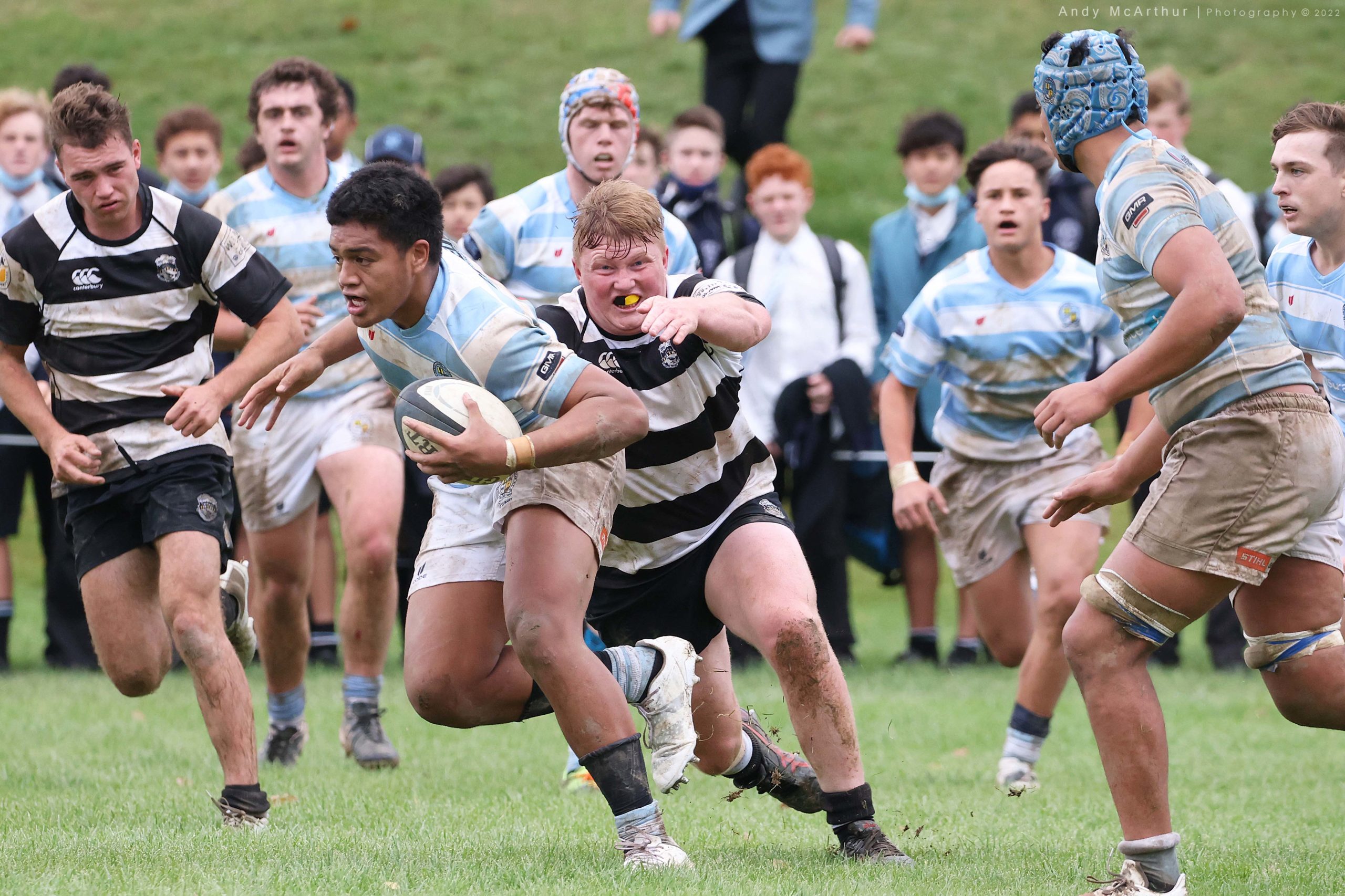 There were wins this afternoon in the Hutt Valley for visiting New Plymouth Boys’ High School and home side St Bernard’s College in two First XV matches.

In the first match, New Plymouth Boys’ High School beat St Pat’s Silverstream 20-17, while in the second, St Bernard’s defeated Mana College 36-10 in the opening match of the second round of the Wellington First XV Premiership.

New Plymouth Boys’ High regained the Shane McDonald Trophy from their annual clash with St Pats Silverstream on a sodden Silverstream #1 this afternoon.

The portents were there for a match in atrocious conditions given the rain that had fallen, including a monsoon-like downpour an hour before kick-off, but the leaden skies cleared enough that no rain fell during the match.

Silverstream started the brightest as New Plymouth failed to take the opening kick-off and regathered possession. A penalty and lineout later, prop Senio Sanele crashed over with just 90 seconds gone.

New Plymouth missed a penalty soon after but got on parity when midfielder Samuela Vakadula ghosted through a hole and put fullback Liam Day over in the corner. A following Cullum Tito penalty put New Plymouth into a lead that they ultimately wouldn’t relinquish, before another long-range strike started by Day and finished off by captain Jacob Mitchell stretched their lead further, with additional pain for Silverstream when halfback Ollie Cuff was sent to the bin for an indiscretion during that action.

Silverstream needed to hit back before halftime and despite the man disadvantage they did, when a series of drives close to the line gave enough space for centre Seyjay Harawira to stroll over.

But just as Silverstream started the first half with a try, New Plymouth did the second when Vakadula went over inside two minutes.

But the home side rolled up their sleeves and mounted a sustained assault on New Plymouth’s line that eventually told when Vakadula headed to the bin and replacement halfback Preston Maraku darted over under the posts. That set up a grandstand last 20 minutes, but despite the best endeavours of both sides that was the last scoring as most of the action took place between the 22s.

There was one last moment of drama though, as replacement New Plymouth front-rower Ropata Taylor was red-carded for an off-the-ball incident, and Silverstream set up one last effort. That came to nought when they conceded a penalty, leaving them desolate as the visitors celebrated.

Mitchell led his side from the front, and his duel at lineout time with Tavis Polglase was a highlight. His yellow card aside, Vakadula was the outstanding figure of the game. Silverstream got good mileage out of Sanele, midfielder Emmanuel Solomona, and replacement Patrick Solomona, but will regret some of their option taking. Skipper Toby Mallon shirked absolutely nothing for his side as well.

New Plymouth Boys’ lead the head to head series in this traditional fixture 54-33.

Conditions weren’t favourable at St Bernard’s throughout the duration of their fixture against Mana College, with rain and gusts of wind dominating proceedings. Although, the sun burst through on a couple of occasions as well.

On a heavy field, the St Bernard’s forwards won the game, with No. 8 Max Fata-Meafou scoring two tries – both from the back of attacking scrums. Fullback Dom Earnst also played well.

Both Mana’s tries were scored in the first half, the first a charge-down try and the second coming after they stretched the St Bernard’s defence out wide and scored in the left hand corner.

Mana have completed three matches in a week, following games last Wednesday against Tawa College and on Saturday against competition powerhouse Scots College. They have seven days off before playing Premier 2 side Bishop Viard College in their second Beard Trophy defence of 2022.

At Last, the Ranfurly Shield is back