Skip to content
You are here
Home > News in briefs > Pioneers of rugby in Wellington: 014 G.C. Fache 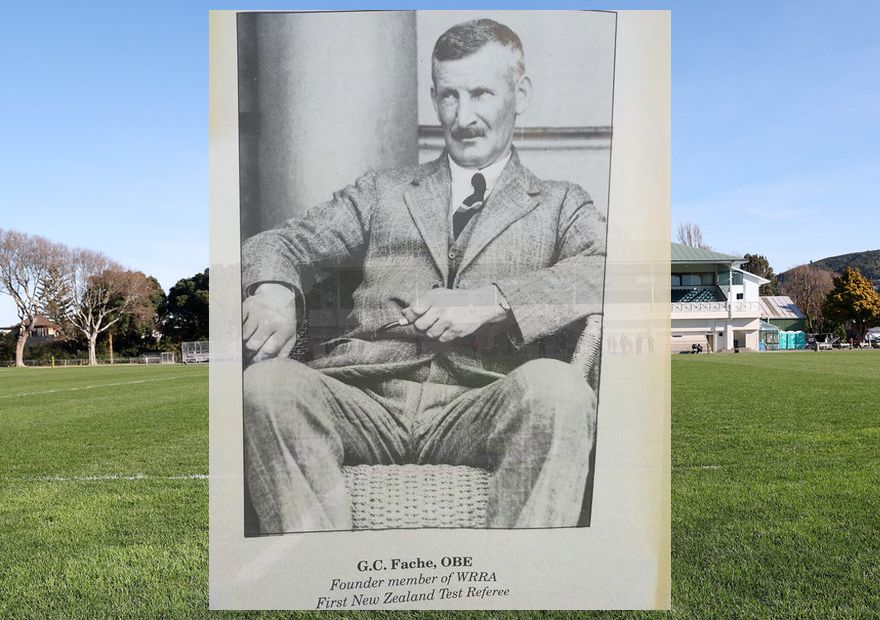 The first Branch of the New Zealand Referee’s Association (as it was then called) was established in Nelson in May 1894.

This was closely followed by Marlborough and then by Wellington, on 25 May of that year.

The Empire City branch became known as the “Wellington Referee’s Association,” and an early Chairman of the Association was George Cox Fache

Fache’s family emigrated to New Zealand from England in 1862. Born in Clyde, Central Otago, Fache attended Otago Boys’ High School, where he played in the first rugby fifteen and the first cricket eleven in 1886-87.

Controversy followed Fache. In 1893, Wellington played Manawatu. Fache, who was at that time a selector for Wellington, had also been selected as the match referee. Wellington just won, and, as per usual in close games, the referee, who the Palmerston North fans had discovered was a Wellington selector, got singled out for attention. The then MP for Palmerston North, James Wilson, became spokesman for the disaffected Manawatu supporters and at the railway station the crowd became somewhat hostile. Just before the train began to move amidst cheers from the players, and groans from the fans, a belated passenger darted into the crowd straight past Wilson, put in the “hip-wriggle” (which was an expression for a charge on a player), and with the collapse of Wilson, the team was satisfied.

Another claim to fame of Fache’s was him becoming the first referee to referee a test match in New Zealand in 1894 in Christchurch.

In this match a New Zealand XV played New South Wales side at Lancaster Park. The tourists lost seven of its eight fixtures but managed to win this one that counted most. New Zealand led 6-5 at halftime but the NSW side scored soon after the break and won 8-6.

Thus, New Zealand has the record of losing its first ever international at home, although six of the visiting team were New Zealand residents in Sydney.

On 17 August 1901 he oversaw Wellington’s 17-16 win over New South Wales at Athletic Park. This was a ding-dong encounter between two worthy exponents of the leather. Wellington clung to their one-point lead to the end, utilising every resource on defence over the closing few minutes.

Of note, Fache’s other claim to fame was as an All Blacks selector – being one of four selectors that picked the 1905/06 New Zealand team that would become known as the first ‘All Blacks’.

Trouble rose to the surface again some 15 years later, which was a catalyst for the formation of the ‘The Wellington Rugby Referees’ Association’ (WRRA) – the current pea-body.

In July 1910 it was reported that “… there is trouble brewing between the Wellington Referees’ Association and the Wellington Rugby Union. The appointment of referees for championship matches is the cause of the trouble.”

In response, early the following season, the Rugby Union advised that its Appointments Board had complete discretion over match appointments. This resulted (in May 1914) in the Referees Association engaging in its own protest, with a number of referees not keeping their appointments as allocated by the Appointments Board.

By mid-year, it was reported that “the Association is, according to the Chairman, at the present time practically on the verge of dissolution, in consequence of alleged unfair methods of the Appointments Board.”

The Association requested that the Rugby Union remove itself from making appointments. The Union refused. On the 3rd of July, the Association, at a specially convened meeting, decided to issue an ultimatum to the Wellington Rugby Union. The effect of this ultimatum was that unless the Appointments Board was reconstructed in accordance with the Association’s demands, the members of the Association would refuse to act as referees.

In response, the Rugby Union inserted an advertisement in all local newspapers asking those willing to control games to forward their names to the Rugby Union’s Secretary directly. Some 68 names were handed in. With no fall-back position, the Association’s then Chairman, Mr D. McKenzie, suggested that the best course for the Association would be to go into voluntary retirement for the “time being”.

The first Saturday which followed the initiation of the Association’s campaign of inactivity brought nothing remarkable. In fact, the Evening Post trumpeted that “… the Rugby Union is taking steps to form these volunteer referees, into a new association, which shall replace the old, and at last night’s meeting of the Management Committee it was decided to call a meeting for that purpose.”

A meeting was duly held with between thirty and forty present, including a good many members of the former Association, which had met in private earlier in the evening. Mr Everett Hales, Chairman of the Wellington Rugby Union, was elected to the Chair of the Meeting. On the Chairman’s motion, it was decided to form an association, to be called ‘The Wellington Rugby Referees’ Association.” 21 July 1914.

23 October: Waldrom hangs up the boots

Aisle be Back: All Blacks v France