Skip to content
You are here
Home > Club Rugby > Pioneers of Rugby in Wellington: 013 Thomas Hunter 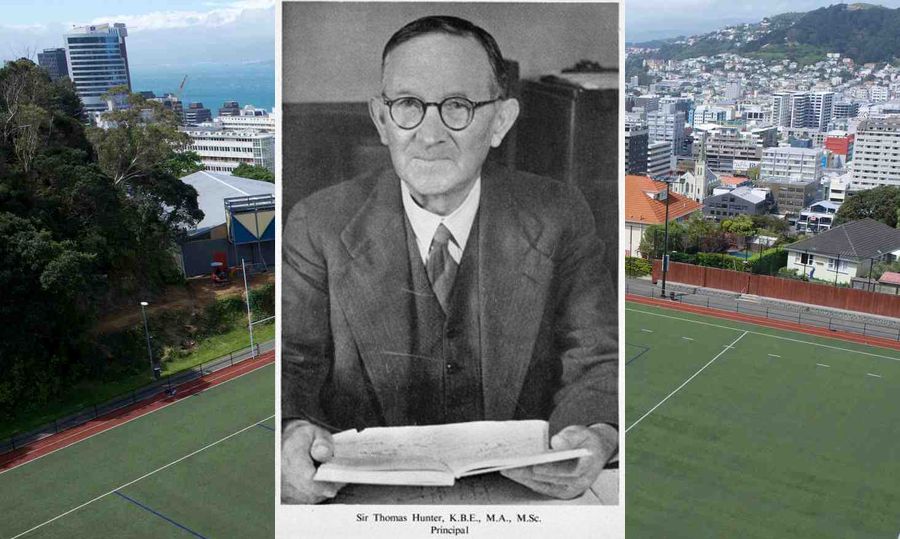 By the turn of the twentieth century, Wellington was a fast-growing city and was established as New Zealand’s political and administrative capital.

Sport and recreation grew with it and there were some 20 active rugby clubs in Wellington, and more being formed. Many would fall by the wayside or amalgamate with others in the coming years, but some of these new clubs such as Johnsonville (formed in 1900) were here to stay. Another would be the Victoria University of Wellington Rugby Football Club (1903).

The Victoria University College was started in 1897. In its early days It was far from the burgeoning university it became and is today. In 1903 there were 191 students and six professors (two new that year), and with no buildings of its own, lectures were delivered at Wellington Girls’ College.

This was the year that the Victoria University of Wellington Rugby Football Club was officially formed by a group of those students. A Junior Championship grade team captained by one H.H. Ostler and a Third-Class grade team led by one F.A de la Mare were entered into WRFU competitions.

The two teams didn’t set the world alight, winning a combined two from 19 matches in the first season.

Enter Thomas Alexander Hunter in year two in 1904, newly appointed lecturer in mental and moral philosophy. Hunter, aged 27, was a five-eighth and his playing, coaching and spirited optimism coincided with improvement. That season the Junior team won four from 10 games.

John Anderson, in his book Victoria University of Wellington Rugby Football Club, the Story of the Green and Golds 1902-1987 noted of Hunter: “That in 1905 the College should enter a senior team in the Wellington Union’s competition…Hope springs eternal…Rugby is more a partial impact of blind atoms. It is a game of brains…the principal difference…between junior and senior football is that junior is slightly rougher.”

In other words, Hunter fired his fledgling clubmates up and got them playing in the senior ranks with the big guns such as Poneke, Athletic, Wellington and Petone. He backed up his enthusiasm by captaining the club’s inaugural team in the Senior Championship. They fared okay, winning two from nine competition games, including wins over Poneke and Wellington. They also played against their Otago and Canterbury College [university] counterparts, losing to the former and beating the latter. Hunter and de la Mare also turned down the chance to represent the Wellington representative side, choosing to play this match against Otago instead.

At the end of 1905, a brick building started to be built at the new campus in Kelburn. This building would be known as the Hunter Building after the subject of this story.

It seems that Hunter retired from playing in 1906 but continued his long association in the administrative arm of the club, becoming both President and Club Captain.

Hunter stepped down as Club Captain the following season, but was President every year between 1907-1921, except for 1916, and in 1926 and 1931-1933. In total he was club’s President for up to 17 years. *In some of these years the records are missing from our sources, so perhaps not all of these years.

Similarly, Hunter became the club’s Patron between 1911-1914 and probably later (missing records) as he was listed as Patron in 1948.

As Anderson writes in his book, Hunter was one of several Victoria College academic staff that took an active interest and involvement in the club. The very first President was Professor von Zedlitz, and he was followed by Professors Hunter, Mackenzie, Kirk, Adamson, Garrow, Boyd-Wilson, Murphy and Cornish.

Once firmly established, the club didn’t always meet with success, and during the war years 113 current and former club members served overseas and 38 failed to return.

George Aitken became the club’s first All Black in 1921, while they won their first Senior Championship in 1928, beating Poneke 16-12 in the decider with 12,000 spectators looking on. They defended it in 1929, which was the time the Jubilee Cup was played.

There were lean years in the 1930s, with the Senior team twice being relegated during the decade. In 1930 they went from hero to zero, the champions finishing dead last. They were relegated to the second division on paper, but by good fortune or because of this, the WRFU expanded the competition from 10 to 12 teams and they stayed up. The demotion eventually came in 1933.

Te Ara, The Encyclopdia of New Zealand, noted that in 1929 Hunter became the first working vice chancellor of the University of New Zealand and held the position until 1947.

The Te Ara biography continues: “In 1938 the part-time office of principal was created at Victoria. Hunter was appointed. When in 1948 the position was made a full-time one, Hunter was again appointed and was succeeded in his chair by one of his old pupils, Ernest Beaglehole.”

“Hunter was made a KBE in 1939. In 1950 the University of New Zealand conferred on him an honorary doctorate of literature. At the beginning of the following year he retired as principal and two years later, on 20 April 1953, he died. Thomas Hunter was almost 75 when he retired and he had served Victoria University College for almost 50 years.”

His almost 50 years at Victoria also coincided with being involved with or a direct supporter of the rugby club.

He lived to see the club win the Jubilee Cup again in 1946 and 1952. The 1953 team that retained the title was one of the best teams ever in Wellington club rugby, but he passed away just as that season was getting underway he missed this in his lifetime.