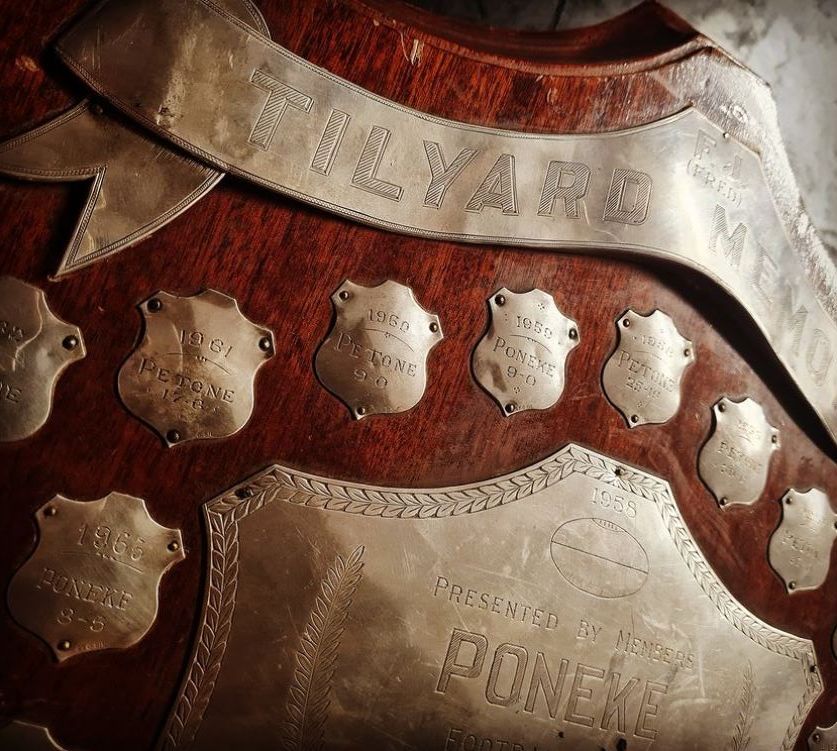 The F.J. Tilyard Shield between Poneke and Petone is being played this coming Saturday. A look at each of the past 10 Tilyard Shield matches in photos and videos.

Poneke went into the match having lost 24-20 the previous year, but with players like Misipalauni Monanau, Evan Belford (current team manager) and Galu Taufale (still playing) in their line-up they were a big chance. Petone, with Wellington Lions captain and later England international Brad Shields in their ranks proved too strong.

Above: Petone blindside Josh Hrstich evades the tackles of Poneke midfielders Kaito Morikawa and Michael Sage in this encounter.

Below: Visiting referee Paul van Etten blows his whistle on a try, as Greg Foe (headband) and other Poneke defenders look on valiantly. Petone right wing Sam O’Leary (2) and No. 8 Darren Munro were try-scorers.

The young and the old. Former professonal player Riki Flutey returned to play several matches for Petone for the first time since 2005. He led Petone to their win this year. Current halfback Carne Green was in his second full season in Premier rugby. Right wing Sam McNicol scored two of their five tries. PHOTOS CREDIT: Cameron Burnell, Fairfax NZ.

It was tit-for-tat until Nick Grigg scored Petone’s fourth try which featured magnificent interplay between the Petone backs. Poneke stormed back into the match with tries to Joe Fiu and Christian Perese but the Villagers were able to hold out for the win. Grigg was the Player of the Match, while the sparkling play of him and Lester Maulolo was a delight in the midfield. Mateaki Kafatolu (in his 101st Premier match) and Greg Foe were busy operators in a big loose forward tussle.

After no fewer than eight straight wins by Petone in this first round interclub fixture, Poneke brought the Tilyard Shield back to Kilbirnie Park. Here Cheryl congraulates Poneke’s players Greg Foe (headband) and Takuma Takashima (1) on the field at Kilbirnie Park after their game. Poneke won 35-17, with right wing Nick Robertson scoring two tries and lock Cole Stewart and hooker Kelvin Harper one each.

Poneke held on to the F.J. Tilyard Shield with a late win over Petone. Both sides scored three tries apiece and Poneke led 18-7 at halftime on the Petone Rec. Poneke tighthead prop Hennie Tui  then raced away to score a try in the scoreboard corner that extended Poneke’s lead to 23-7 – video and photo of that try above. Petone came back but the visitors were able to hold to retain the Tilyard Shield.

After a slow start, Poneke finally capitalised on early momentum by scoring two tries and taking a 10-0 lead. Left wing Tyson Fukatsu crossed soon after the break to put Poneke up 17-0. Petone crossed through replacement prop Jordan Gogo but Poneke scored twice more and when Alex Morrissey found the line it was 29-7 and all but over. Poneke clinched their 2018 Jubilee Cup spot with this win, whilst Petone went on to play in the Hardham Cup in the second round.

Poneke had All Blacks hooker Dane Coles in their ranks for this match, and he scored a popular try late in the first half (top clip) before being subbed off at halftime. Petone came back in the second half with a try in the grandstand corner to replacement wing Sam Blackburn, and then No. 8 Tupou Sopoaga showed his artistic diving skills over the line in scoring the clincher late

Galu Taufale’s 100th game for Poneke. Momentum swung back and forth at Kilbirnie Park where visitors Petone held on over the final several minutes to take a hard-fought victory. Poneke went ahead 17-13 when Isaac Moe-Jenkins scored from fullback, but Petone’s Logan Henry scored to put Petone up 20-17 (photo above). Caleb Robson slotted a penalty for Poneke and it was all square with the clock winding down. But a dominant scrum and impact off the bench would prove telling for Petone who scored through pivot Carne Green to put them up 25-20, adding a penalty at the end.

Assistant coach Piri Weepu made his debut for Petone in this match, while prop Alapati Soke played a big game in their one-point win last year. Poneke hooker Andrew Jones scored two tries in his 50th Premier game and Poneke first five-eighth Pakai Turia missed a penalty with 30 seconds left on the clock, but the and the Villagers held on to win.

Read about the Petone-Poneke rivalry 100 years ago:

LOOKING BACK A CENTURY: RUGBY IN 1922 (PART ONE CLUB RUGBY)