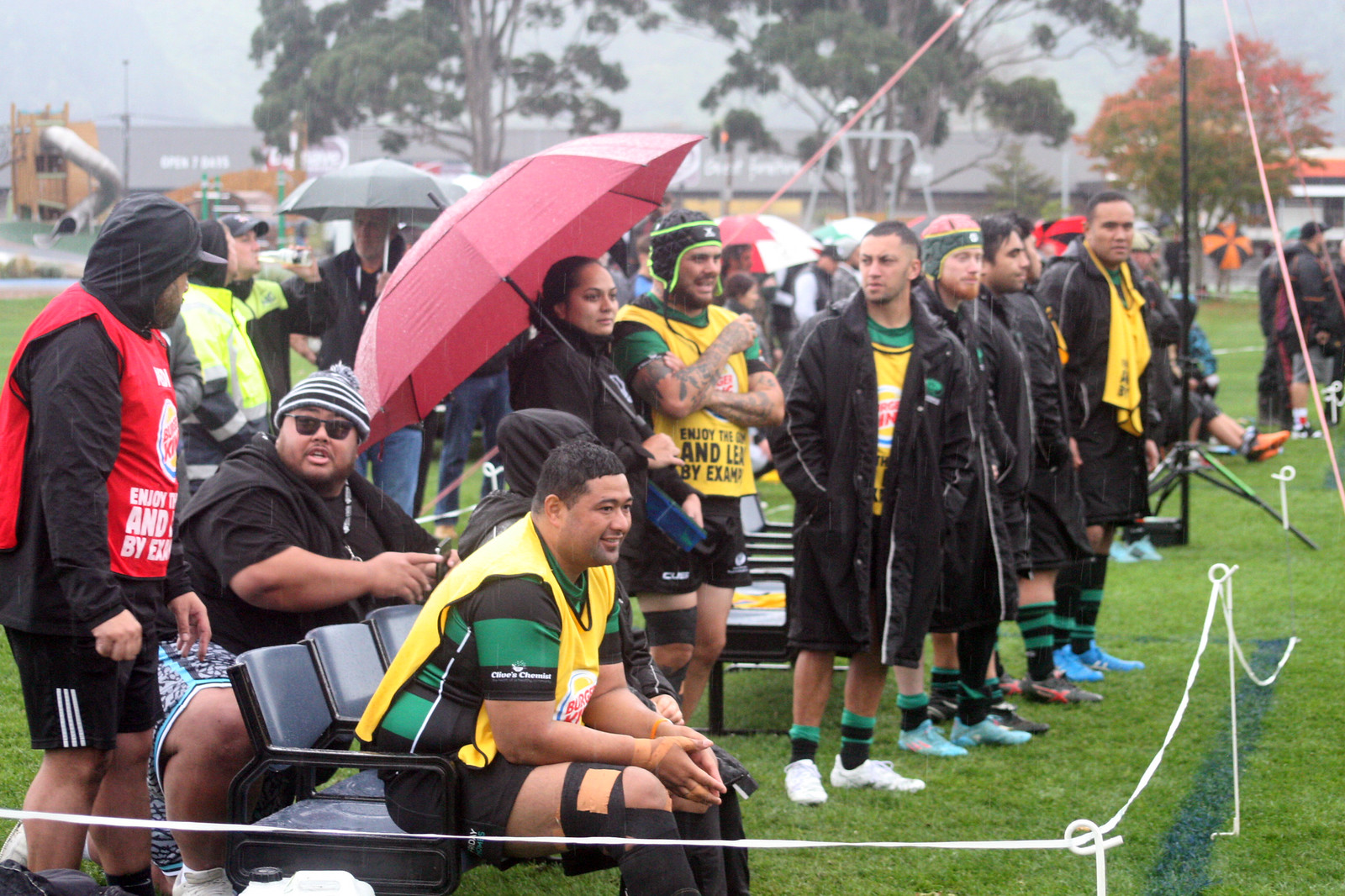 Above: Wet weather hit Wellington club rugby on Saturday for the first time this season. Wainuiomata’s bench watch on at Maidstone Park as their side fights hard for a 23-22 win over the Upper Hutt Rams. PHOTO: Peter Mcdonald.

[UpdatedThe final week of pre-season fixtures of the secondary school girls competition is this Wednesday at Porirua Park. New entrant Scots College play St Mary’s College at 4.00pm in Premier 1. There are four warm-up Premier 2 fixtures elsewhere – so eight schools starting the season in the second-tier grade which is encouraging.

The final weekend of grading matches in boys college rugby this coming Saturday, with several teams across different grades hoping to qualify where they want to be. The four Wellington Hurricanes Festival First XVs will also be regrouping this weekend after tough weekends in Napier just gone that saw St Pat’s Silverstream win well against Gisborne but the other three off the pace against the other three schools.

One talking point over the weekend was the outcome of the Women’s Rebecca Liua’ana Trophy after Northern United beat Oriental Rongotai and Marist St Pat’s beat Avalon to leave three teams – Ories, Norths, and MSP – tied on 30 points with six-win, one-loss records.

Under the union’s tiebreaker rules this would have been resolved by points differential, but this was complicated by MSP having one team default to them while Ories had no fewer than three. To resolve this the union – also by rule – has resolved the matter by applying an average points for/against to those defaulted matches, which leaves Ories with a superior mark to the others and therefore have retained the trophy for another year.

Ories have won the Rebecca Liua’ana Trophy (Women’s First Round) five times since 2016 but in losing 29-17 to Norths on Saturday they lost their five-match winning streak.

To quote NFL coaching great Vince Lombardi, “What the Hell is going on out there?” The past week has seen one Premier Men’s player and two Premier Women’s players suspended for abuse of match officials, while Saturday saw another Premier Mens player sent off for the same reason. Whatever the reason, its inexcusable.

Has anyone asked NASA if the numbers on the back of the Johnsonville Premiers jerseys are visible from space?

Speaking of Johnsonville, something has to be said about the state of Helston Park. Full of divots and patches of bare sand, its easily the worst Premier surface in the province and in the view of our own Scott MacLean who refereed there on Saturday is borderline dangerous. None of this is the fault of the Johnsonville club, with the finger firmly pointed at Wellington Council and its maintenance practices.

Some nice touches by Northern United second-five Faraimo Nofoaiga on Saturday – directly involved in their first two tries that saw them go to a 14-0 lead. Nofoaiga has joined Norths this year after taking 2021 off. Previously he played 79 matches for the Tawa Premiers between 2014-2020 and was a Jubilee Cup winner in 2016.

We have a dropped goal in Premier Rugby! Wainuiomata’s Justin Wilson snapped one yesterday in his side’s narrow one-point win over the Upper Hutt Rams at Maidstone Park. It’s the first droppie in a Premier match since the midpoint of the 2020 season, which was also kicked by Wilson in his then-side Pare-Plim’s win over Johnsonville.

The Paremata-Plimmerton Colts with the Daniel Baldwin Memorial Trophy, after beating the Wellington Axemen Colts 15-14 on Saturday. The trophy commemorates former Axemen player Baldwin who suffered a serious n injury whilst playing this corresponding match in May 2017 – almost five years ago to the day this game was played – and tragically passed away the following Wednesday.

A dramatic charge down won Petone the McBain Shield. Three things Hutt could have done better.

Dramatic win for Hutt Valley High School 12-10 over Taita College to set up a chance for a crack at Prem I. Two years ago they were bottom of Prem III.

The All Blacks rest and rotation policy and the trickle down effect to club rugby. TJ Perenara rested out of the Hurricanes this past weekend (never mind he was injured and sidelined for a couple of months earlier this season), meant a call-up for Logan Henry to sit in the stands in Sydney as halfback back-up cover. This coincided with the McBain Shield, so he missed that. It didn’t matter of course, Cam Ferreira scoring a ‘Henry-like’ try from a quick tap and Petone winning on the hooter. But to us at least, another bullet point to add in the long disconnect between professional and community game.

The Petone Rec. Grandstand built in 1939 for 10,000 pounds to accommodate 1,344 spectators. At least 75% full on Saturday, that’s around 1,000 in attendance. Not quite the 4,000 in attendance at the first McBain Shield in 1936, but perhaps the biggest club rugby crowd in attendance, in over a decade (outside of finals)? While the players brought the entertainment, the crowd brought the reason for them to play. Community rugby, needs a community. Clubs create that community.

As a further aside, it also came on the first of three (to be confirmed) weekends that club teams the length and breadth of the country are without all their U20s players, preparing for and playing in the Super Rugby U20s tournament. We at Club Rugby totally understand the need to develop these players, particularly given the resources and money poured into U20s programmes in the northern hemisphere. And this tournament has been pushed back at least a month because of Covid. Plus we are happy for the players involved, but it has to be said that one of these years soon the entire season structure needs revisiting.

Speaking of the Hurricanes U20s, they lost 50-45 to the Crusaders U20s on Saturday in their match in Blenheim. To have 95 points scored in a match like this is exciting for the highlights reel and obviously lots of attacking flair, but perhaps a little alarming.

A couple of injury tweaks to the Hurricanes U20s team, including Old Boys University openside flanker Jack Riley who was a late call-up to the squad and who played in Blenheim and will be with the team throughout the tournament.

Congratulations to Varsity who won the first round Jubilee Cup and are the clear front-runners in Manawatu Senior 1 club rugby at this point in the season.

Thomas Kiwara celebrated his 100th match for Avalon. A pillar of the community, the milestone is richly deserved.

Ollie Norris scored his first Super Rugby try to spare the Chiefs from embarrassment against the Rebels in Melbourne. Born in Sydney, Norris went to St Peter’s Cambridge and was a member of their First XV that won the National Co-Ed title. The strong scrummager previously represented New Zealand in the 2017 Barbarians Schools team. In 2021 Norris was named in the Māori All Blacks squad and made his debut v Manu Samoa on July 3rd 2021.

The Western Force have lost 24 matches in a row in New Zealand going back to 2014.

Sevu Reece is the fastest player to reach 40 tries in Super Rugby. It took him 50 games for the Crusaders.

The Highlanders have won three games in a row and though the Blues are 11-1, the Highlanders would present a tricky first round playoff fixture.

Mount Albert Grammar School (MAGS) celebrated their centenary on Saturday with a 37-10 in over Auckland Grammar School in the first round of the 1A competition. MAGS have won the National Top Four title three times in 1982, 2010 and 2016. They are responsible for producing some of New Zealand’s great rugby talents including Bryan Williams, Sonny Bill Williams and Portia Woodman.

Shirley’s Philip Watson for playing his 300th club rugby match in the weekend.

Watch a news item about his milestone here:  https://www.1news.co.nz/2022/05/14/christchurch-club-rugby-legend-brings-up-300-game-milestone/

Blues chief executive Andrew Hore believes Super Rugby has become a system for the All Blacks instead of a competition for the fans – but added there are signs of a change on the cards.

Despite the form of the team this year, the large Auckland fan base aren’t responding with ticket sales, with approximately 15,000 fans turning out last week.

It’s an issue that has plagued the Super Rugby competition for years, regardless of whether it’s the Pacific, Aotearoa or any other variant of the southern hemisphere club competition.

Hore believes part of the problem is that the competition has gone away from what made it so successful in the first place – providing an entertaining afternoon of footy for fans.

“It needs to go back to a fan-centric model.”

Read and watch more from the news item from last Friday here: https://www.1news.co.nz/2022/05/13/super-rugby-a-product-for-all-blacks-not-fans-says-blues-ceo/

Our weekly Monday column is a collaborative one, so any news, information, tidbits or contributions are welcome. Please email editor@clubrugby.co.nz or find us on social media and send a message.