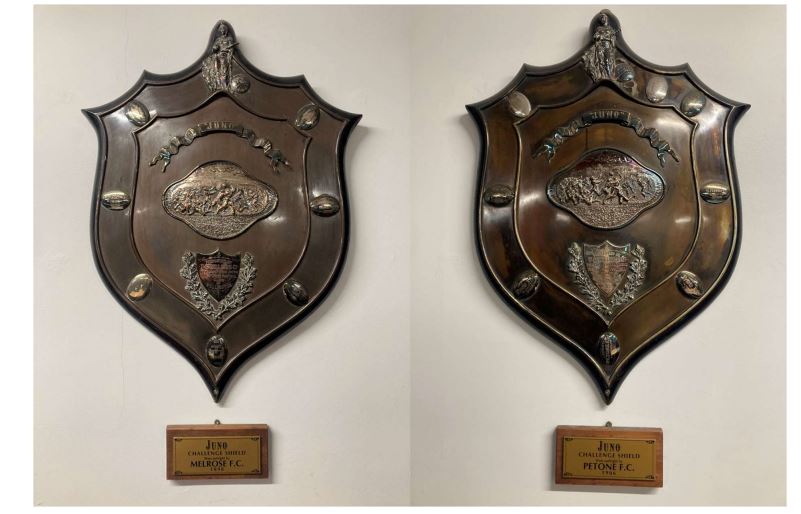 Above: The two Juno Shields, won by Melrose (left) and Petone (right) over a century ago, as three-time winners of the Wellington Club Rugby Championship. Read more below.

The tradition that a sporting trophy becomes the permanent property of the winner when it is won three times in succession (or five times at intervals) can be traced by Touchline back to Archibald William Montgomerie, 14th Earl of Eglinton, 2nd Earl of Winton, 3rd Baron Ardrossan and 15th Lord Montgomerie who (being remembered as “fond of sport”, as reviver of the Bogside races), in the mid-nineteenth century became a great benefactor of community sport in Scotland.

In particular, Archibald donated trophies for competition in a number of sports, (including golf and cricket) which all had a primary rule which stipulated that the trophy became the property of the victor, if won three successive times. In New Zealand, this sporting custom is first reported in the early 1870s, when trophies were awarded on this basis to participants of the shooting contests of the various “Volunteer Regiments” formed under the Militia Act of 1858, which were scattered throughout the country.

In the case of Wellington Rugby, the “Rugby Union Challenge Cup” (manufactured and donated by Siegfried Kohn of “Kohn & Co.”, Lambton Quay jewellers) appears to have been the first silverware competed for from 1882 to 1884, replaced by the “Cobb & Co. Cup” in 1888, with a literal (of unknown origins) “Senior Cup” (perhaps a figurative trophy?), competed for in the intervening years.

In the wake of growing concern on the deleterious effects of smoking in the 1890’s, particularly “the alarming growth of juvenile smoking of cigarettes and other concoctions of vile tobacco”, in 1894, US tobacco firm T. C. Williams & Co., sought to shore-up any threat to future sales by offering trophies based on its popular “Juno” brand of Virginian tobacco leaf (“the brand which never varies, but is always the best”), to the Canterbury, Otago and Wellington rugby unions. Only Wellington accepted the offer, (which was outright declined by the southerners).

Of course, rugby union (and other sports) was deeply in “tobacco’s pouch” from the mid-1870’s when it became commonplace for all sorts of community sport organisations to hold an annual “smoke concert” (a phrase in common use for over a subsequent century), generally to celebrate the achievements of the past year.

Messrs W M Bannatyne and Co. were appointed agents for T C Williams & Co. in the late 1880’s, heavily promoting Juno “cake tobacco”, with the phrase “smoke Juno tobacco while playing” which (one wit drily observed), would be “rather inconvenient if the advice were followed literally”. The firm’s representatives undertook an active campaign of promoting “smoking and sport”, with clubs in all parts of the country (including bowls and sailing) receiving offers (many accepted) of trophies provided that “Juno” gained the exclusive naming rights to the relevant competition.

It was in this spirit of commerciality that in April 1894, Bannatyne offered a “Juno trophy” worth 15 pounds, 15 shillings to Wellington Rugby, (around $3,500 in today’s coin). The conditions imposed by the Management Committee of the rugby union were that the trophy must be won three times in succession to be won outright. Poneke and then Petone were the first two sequential winners. Then from 1896 to 1898, Melrose won the Juno Shield three consecutive times and as such “retained it in perpetuity”. The Shield was eventually presented in the early 1920’s to Melrose Club stalwart John Burns, who witnessed the birth (1886) and death (1936) of the club, (including ten years of war-enforced dissolution between 1915 and 1925). Following Burns’ death in 1941, the original Juno Shield found its way to North Park, in Petone.

Not wishing to miss “a goal of perfection” (another nicotine-inspired Juno catch-phrase), in 1899, a new Juno Shield was donated by Bannatyne & Co. under the same conditions as the first “similar in every respect to the shield … which was won by the Melrose Club”, with Petone winning it for three consecutive years 1904 to 1906 and – like its predecessor Melrose – earning the right to hold the Shield in perpetuity. The Juno Shield (“mark-two”) is still hung proudly on the wall of the lounge at the Petone Rugby Football Club, 116 years after it was won outright, alongside the original.

Which brings us to the “Swindale Shield” (which is where this story commenced, some years ago). The rules agreed for the Swindale Championship Shield when donated by publican Joseph Swindale (Swindell) of the Palace Hotel, 44-46 Willis Street, in 1910 were that that if any team won the Senior Championship for three consecutive years, that team would keep the Shield in perpetuity.

Athletic dutifully fulfilled that clause in 1913 and the Swindale Championship Shield was quietly retired to the Trophy Cabinet of the Athletic Football Club, until 1969 when it was reported to have been famously “found” in a broom cupboard and (somewhat unusually) put up for contest once more.

Now Touchline is something of a stickler when it comes to sporting traditions and “keeping to the rules”. After all, competitions with longevity require consistency. The rules governing the Swindale Championship Shield in 1910 (in a similar manner to the Juno Shield) were drawn up by Wellington Rugby on 25 May 1910. Rule 3. stated that the shield would be won “outright by any club in the event of the senior team of such club winning the championship for three successive seasons, or five times at intervals”.

By Touchline’s reckoning, Athletic won the first triple, (1911, 1912, 1913). Upon the Shield’s resurrection, Petone won it for the second, (1969, 1970, 1971). Now, Touchline assumes that the administrators at the union had the foresight to rescind the former Shield rules before deciding on the current? If not, the lounge at North Park might be missing one trophy, which (based on current results midway through the present competition) might well return (for good?) in 2022.

As Archibald Montgomerie might well have chuckled as he chased the foxes across his family property at Eaglesham on horseback, “now, that would be a jolly good wheeze!”