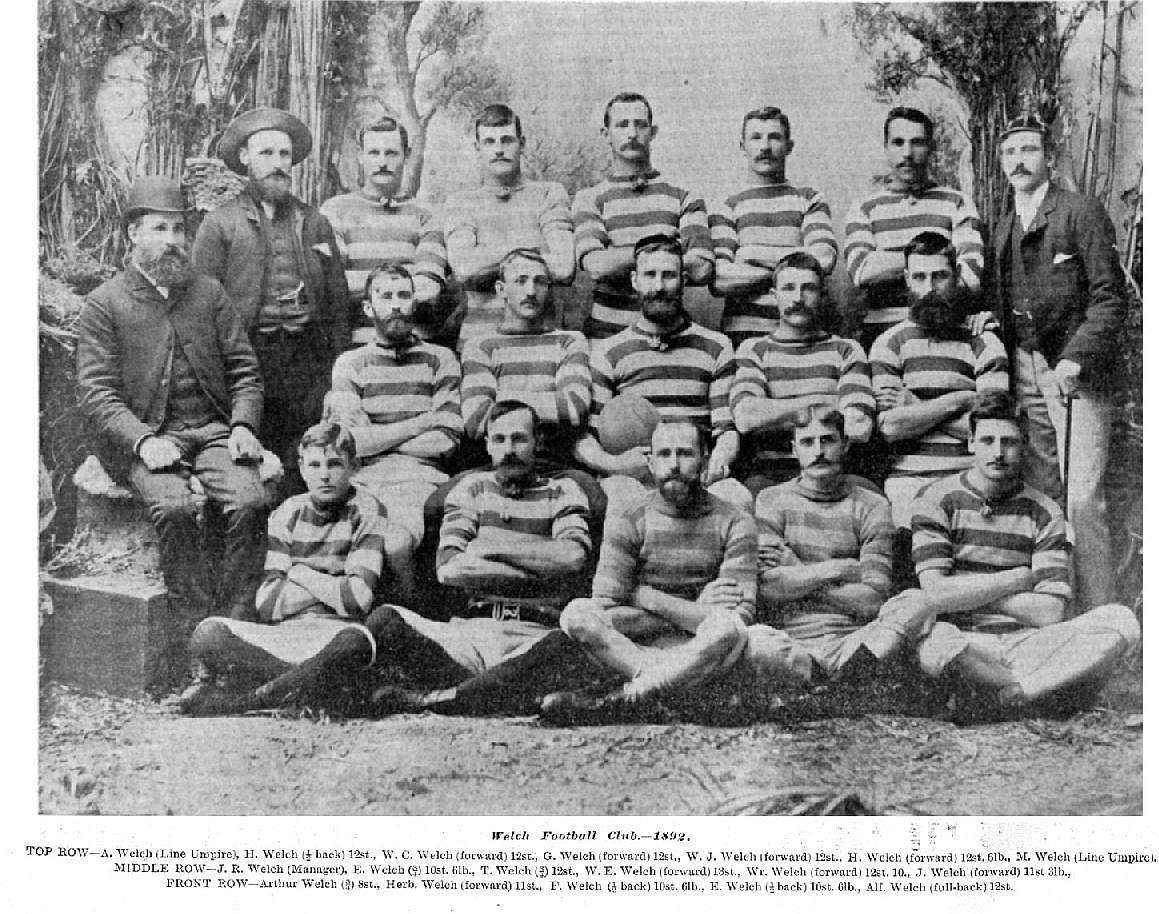 The Welch family football team in 1892. Mot Welch is standing on the right with the cane and listed as the line umpire. Perhaps he was injured at the time and was on touch judge duties?

Maurice ‘Mot’ Welch was one of four brothers who in 1888 founded the Taita club, changing their name to Epuni in 1889.

After Petone (formed 1885), Epuni existed as the second club in the Hutt Valley throughout the next decade or so, until Mot Welch played a leading role in founding the Kia Ora club in 1898 and later the Hutt club in 1910, which was an amalgamation of Epuni and Kia Ora, of which Welch was the inaugural Club Captain.

Welch and his brothers were from a large family, all grandsons of William and Ann Read Welch who were original Hutt Valley settlers off the Oriental ship in 1840.

As well as the Hutt Valley, the extended family would develop strong ties to the Wairarapa.

The Welch family had their own private family rugby team in operation as early as 1886 and certainly over the next two decades as photos of the team exist from 1886, 1892 (headline photo above) and 1908. The Welch team also played cricket in the summer.

The Cyclopedia of New Zealand recorded the Welch family football team in 1892 as drawing a game against the Masterton Football Club. In 1908 the family team played its last ever game against a combined Kia Ora, Epuni and Petone team 11-3. Several members of this side played for Wairarapa and one was also a local boxing champion.

The Taita/Epuni club was formed by the Welchs and several other sets of brothers from likeminded settler families living in the Hutt in the late 1880s. Epuni was named after the Maori chief of the area, and originally entered a team in the WRFU Junior Championship. A son of the chief, Eno’ Te Puni, was in this first side.

Epuni quickly got established and in 1890 they were runners-up to Wellington city team Melrose in the Junior Championship. Epuni then briefly merged with Petone, before re-forming on its own in 1892.

The population of the Hutt at that time was small, the 1896 census recording 2,685 souls living in the Petone Borough and 1,520 in the Lower Hutt Borough. Large swathes of the Hutt was rural and farmland, from which Epuni drew many of its players. But it was growing and the Lower Hutt township was starting to take shape.

It seems that to cater for those players now living in the Lower Hutt township itself, Mot Welch called a meeting at the Hutt (Family Hotel) to form another Hutt club.

As he wrote in his memoirs:

“We had a very successful gathering and were unanimous about forming the club, but the name had to be selected. [As we] were having some liquid refreshments, one man said “Kia Ora”, to which I immediately said, “call the club ‘Kia Ora’ – which we did.”

Kia Ora’s headquarters were at the “Young’s paddock” on what is now known as Riddiford Park, just north of the Hutt Rec, while other grounds used were “Hayes’ Paddock” sited where Rutherford Street is at present, and “Butler’s Paddock” in Alicetown and sometimes Sharp’s Paddock” which was on the Petone side of Wakefield Street. In 1908 the Hutt Rec was used for the first time.

The Epuni club continued to play at Dorne’s Farm, which was situated on or near present day Waiwhetu Road.

Like Epuni a decade earlier, Kia Ora joined the WRFU Junior Championship competition and also fielded 3rd grade senior teams, and soon found its feet over the next decade or so.

Kia Ora’s high point was winning the Junior Championship in 1908, as recorded by Mot Welch.

“One started I had to continue and kept going season after season, each year getting new players into the club. Petone of course was always our toughest proposition, and we were beaten time after time. Finally, I persuaded Jake Baumber to play for us and what a difference he made with his wonderful football knowledge. Then came Harry Driscoll who had opened business in Lower Hutt. Naturally I and my farmer friends gave him all our work and I soon had him playing for us. We were set upon winning the Junior Championship which Petone had won for several seasons. The fellows in the railway workshops were surprised when they heard Slater was going to play for Kia Ora and asked him if it were true. “Quite true,” said Charlie. “Mot Welch is giving me a Jersey Cow and ploughing up my section for me”. Naturally I was bombarded with questions as to the accuracy of the statement and replied, “Oh Yes quite true and well worth it”. Kia Ora defeated Petone that year 1908 and won the Junior Championship for the first time.

All the while, there was a fierce rivalry between the Kia Ora and Epuni clubs, and when their teams met each year, no love was lost.

Against this backdrop, a meeting was called in the Town Hall in July 1909 to discuss amalgamating both clubs and forming a new ‘Hutt’ club.

Probably a catalyst for this was Mr William Judd having pledged a section in Railway Avenue to build a gym on the proviso that Kia Ora changed its named to Hutt.

After a heated meeting the amalgamation was confirmed, and Mot Welch was elected the Hutt club’s first Club Captain. But there was a problem. It seems that majority of the Epuni players themselves didn’t want this. They begrudgingly agreed, although they refused to play in the new Hutt playing strip, and the following season the new Hutt Club made its debut by entering teams in the senior, junior, third and fourth grades.

The diplomacy of Welch and his fellow administrators wasn’t enough to stop the Epuni faction breaking away after just one season and forming the Waiwhetu club. Waiwhetu entered WRFU competitions in 1911, while Hutt were not able to field any teams at all in 1911. These players must have been talked around during the following off-season, as Waiwhetu promptly disbanded and all the players went back to playing under the Hutt umbrella.

Putting aside these early teething troubles, plus the pull of rugby league in the Hutt Valley at the time (which might have been a factor too in Hutt not fielding any teams at all in 1911), the Hutt club got down to business and following the war emerged relatively strong, although mostly as a Junior club. Re-entering the Senior Championship, they went on to win the Jubilee Cup in 1931 and 1934 and then the Club Championship in 1937.

The Hutt club would later merge with High School Old Boys in 1967 and later with Hutt Valley Marist in 1993, to form the present-day Hutt Old Boys Marist club.

Mot Welch’s trail cools down after the formation of the Hutt club in 1910, but in 1918 he was a Hutt County Councillor – as this illustration shows from the NZ Truth on 12 October of that year:

He was also a member of the Harbour Board and later Chairman of the Upper Hutt Town Board.

Petone and HOBM to meet in Colts final on Saturday