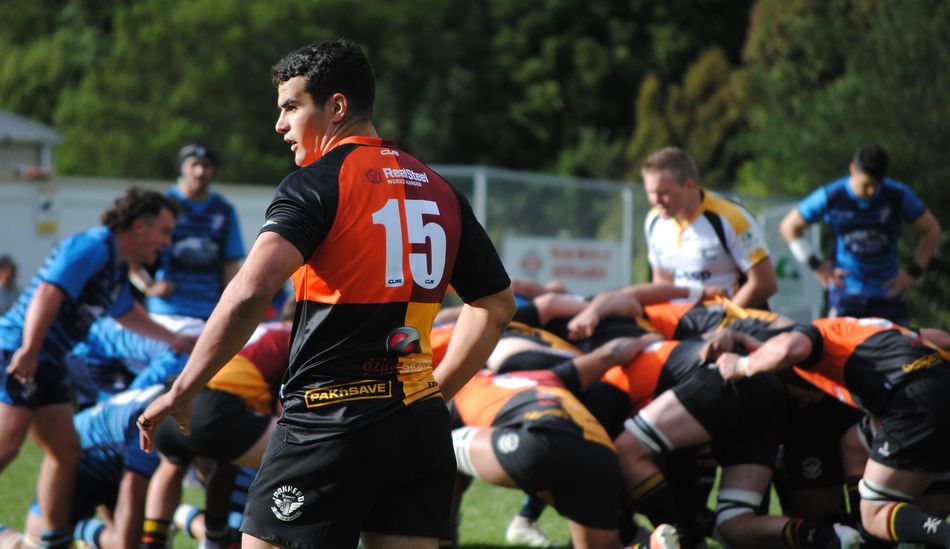 Josh Moorby playing for the Upper Hutt Rams a fortnight ago. He scored a try in a 21-21 draw with Johnsonville.

Josh Moorby has been turning heads with his startling form for the Hurricanes in Super Rugby.

On Sunday the fullback scored three tries in the record 67-5 win against Fijian Drua at Sky Stadium.

“Bailyn (Sullivan) was able to give me a good pass for two of them and for the last one Cam (Roigard) threw a lovely pass off the back of the scrum. Thankfully those boys were able to put me into space,” Moorby said.

Moorby on the way to the try-line on Sunday.

Earlier in the season he impressed with a series of incisive runs in the narrow 21-24 defeat against the Crusaders. He scored a try on debut against Moana Pasifika.

With two of their three remaining fixtures against sides below them in the standings, the Hurricanes are well-placed to secure a position in the playoffs. The top eight sides advance to the playoffs and the Hurricanes only need two more points to guarantee a place.

The form of youngsters like TK Howden, Salesi Rayasi and Moorby is keeping more established talent honest. How does Moorby compare his game to leading fullbacks like Will Jordan and Jordie Barrett.

“I grew up watching those guys on TV so I try to base a lot of my game on what they do. I try to anticipate where the ball might be, provide a good support role, run hard, defend strongly and kick smart.”

Moorby can cover ten-metres in 1.59 seconds

Such clarity of role might not have been obvious for Moorby at Hamilton Boys’ High School. He didn’t make the A or B teams at Under 14 and 15 levels and was only a third XV player in Year 12. In 2016 he was called into a First XV UK tour squad to cover for injury. It was a major boost to his confidence.

“It was pretty special to go away with your rugby mates and see the other side of the world. We played three games in Ireland and two games in Wales. We won the first four games but in the last game in Wales played what turned out to be a big, University aged team and got beaten”

“It’s such a privilege to be an old boy of Hamilton Boys’. The legacy and passion they have in the First XV is unreal. Nigel Hotham has been coaching the team for a long time. He has the ability to connect with the boys and bring them up to the next level.”

Hamilton made the National Top Four in 2016. In the semi-finals they almost upset a Hastings Boys’ High School team that featured four Super Rugby players in the backline alone.

“We scored first in that game. Back then if it ended in a draw the team who scored the first try won on a countback. It was 11-8 when we had a penalty. The kick was 40-metres out on an angle. It started on the left and when it curved back I was certain it was going over. Instead it hit the post and Hastings turned around and scored. It was a tough thing to watch that ball ricochet that’s for sure.”

Moorby spent the next two seasons playing for Te Awamutu Sports. In 2019 he was offered a professional lifeline when he was approached by Southland, where he has been key in turning the perennial losers into a competitive outfit.

“It was a great achievement. The week before we actually led Manawatu 26-5 at halftime and let it slip. Ngani Laumape got a hat-trick, but we showed against Manawatu we could get a lead, all we had to do is hang on to it.

“The chance to play for Southland has been really special. Win or lose we put our heart out. The crowd is really passionate.

“I can’t speak highly enough of coach Dale McLeod whose now with Pasifika. He builds really strong relationships with his players off the field which means he’s able to get the best out of us on the field.”

Southland won three games in 2020. In 2021 only a solitary win was achieved but they finished within seven points of four opponents despite employing 41 players in nine games. One of those games was a 22-24 loss in a non-competition fixture against Wellington. Moorby scored a try and the next week received his phone call to join the Hurricanes.

“I was lost for words. It was pretty daunting joining an environment with the likes of Ardie and Juilan Savea but all the boys have been so welcoming and open to questions.”

Moorby (#14) looking to stop Tomasi Alosio at Porirua Park last year – a week before being told he was a Hurricane for 2022.

Moorby received a similarly gracious reception from Upper Hutt a fortnight ago. He scored a try in their thrilling 21-21 draw against Johnsonville.

“I’ll be honest when I was driving out there I didn’t realise how far it was from Lower Hutt to Upper Hutt. The road seemed to keep on going. Upper Hutt is a really nice club. All the boys were really supportive. It was a bit of a shame we didn’t win the game but Johnsonville is a good side.”

Woodlands, the club Moorby played for in Southland, are a good side. They scored three tries in the last seven minutes of the 2021 Galbraith Shield final to beat Star 24-23. This weekend Jason Rutledge makes his 250th appearance for Woodlands. In two decades he’s played a record 143 games for Southland too!

“Cabbage, what a man,” Moorby marvelled.

Josh grew up on a dairy farm with his parents John and Anne. His older brother Cameron is a PE teacher and 2nd XV rugby coach at Hamilton Boys’ High School. A hooker in the 2011 First XV, Cameron was fitness trainer when Hamilton won the National title in 2013, snapping the 52-game unbeaten streak of Auckland’s St Kentigern College in the final.

Moorby will play the 2022 NPC for Northland. “A new challenge closer to home” an appealing arrangement.

Aisle be Back: Hurricanes v Sunwolves in Tokyo