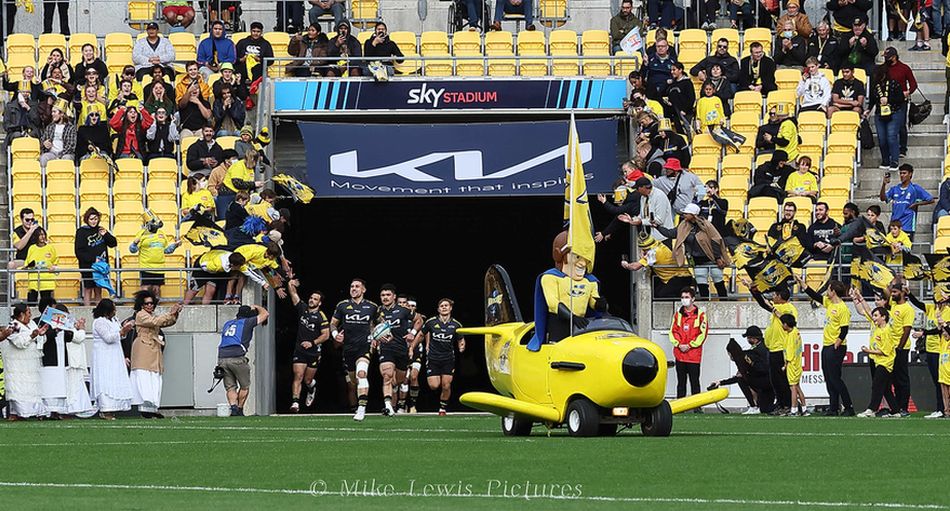 Above: TJ Perenara leads the Hurricanes out on Sunday Perenara in a Hurricanes record 62nd Super Rugby match at the Westpac/Sky Stadium.

The Fijian Drua is in its first year of Super Rugby and is the 19th different franchise the Hurricanes have played against.

Of the 19 franchises played, the Hurricanes have beaten nine of them first time up and lost to 10 of them.

The Hurricanes 67 points against the Fijian Drua have only been bettered twice before: against the Sunwolves at Tokyo (83-17) and in the very next match against the Rebels at Wellington (71-6), both in 2017.

The Hurricanes winning margin of 62 points has only been bettered twice before: in the aforementioned matches against the Sunwolves (66 points) and the Rebels (65 points).

The Hurricanes scored 11 tries against the Fijian Drua. This total has only been exceeded once before: 13 against the Sunwolves, and equalled in the match against the Rebels.

The 67 points scored by the Hurricanes are the most conceded by the Fijian Drua in their short history. Before this match their worst losses had been against the Brumbies (3-42) and the Rebels (27-42).

The Fijian Drua played their first match in New Zealand.

There were three debutants in the match. Tyler Laubscher started whilst Owen Franks and Riley Higgins made their appearance off the bench. Laubscher became Hurricane #299 whilst Franks, who preceded Higgins onto the field by 19 minutes, became Hurricanes #300.

These three players took the number who have made their Hurricanes debut in 2022 to 20, a number only exceeded by the 30 who appeared during 1996, the first year of Super Rugby competition.

At 34 years and 136 days Owen Franks is one of the oldest players to make his debut for the Hurricanes. The oldest is Ross Geldenhuys who was 36 years and 21 days old when he debuted against the Blues at Auckland in May 2019. At the other end of the scale Riley Higgins was 19 years and 240 days old on his debut, although a wee bit older than the youngest ever, Raymond Tuputupu, who appeared in his first match earlier in the season against the Highlanders at Wellington, aged 18 years and 328 days.

The Franks brothers brought the number of sets of siblings who have played for the Hurricanes to 11. For the record they are Beauden and Jordie Barrett, Jacob and Tamati Ellison, Bryn and Gareth Evans, Ben and Owen Franks, Jonah and Karl Lowe, Matua and Reuben Parkinson, Billy and Matt Proctor, Ardie and Julian Savea, Andy and Gordon Slater, Ace and Filo Tiatia, and Scott and Thomas Waldrom.
Tyler Laubscher became the 20th Hurricanes player to make his debut at No 8.

There were seven different Hurricanes players who scored tries including three who scored more than once. This has happened only four times before: once in 1997, once in 2012 and twice in 2017.

Josh Moorby scored three tries in a match for the first time to add to the two tries he had scored in separate matches previously. He is the 17th Hurricanes player to score a “hat-trick” and the list also includes four of his current team-mates namely Jordie Barrett, TJ Perenara, Julian Savea (twice) and Salesi Rayasi. Moorby’s third try was actually the 700th to be scored by a Hurricanes player in a Super Rugby match at a home venue. The total now rests on 701.

Wes Goosen (for the fourth time) scored two tries as did Billy Proctor (for the second time). The other tries were scored by Aumua (his 10th overall), Rayasi (14th), Justin Sangster (his first) and Isaia Walker-Leawere (second). Sangster, who scored the last of the Hurricanes 11 tries, had the honour of bringing up the 50th for the season.

Incidentally, Sangster and Walker-Leawere provided the 64th different Locking combination to start a match for the Hurricanes and the fifth new one this year.

And while on the subject of different starting combinations, Laubscher, Blake Gibson and Du’Plessis Kirifi appeared for the first time as a backrow combination and are the sixth different one to be used this year.

The Fijian Drua have to date conceded the most tries in 2022 (58, one more than the Moana Pasifika) and Billy Proctor’s first touch down was the 50th to be scored against that side.

Aidan Morgan had his most productive match so far in scoring 12 points from six conversions.

TJ Perenara captained the side for the first time since July 2020. He is the third player after the incumbent captain Ardie Savea, and Reed Prinsep, to lead the side this year. Perenara has the best winning percentage of all Hurricanes captains who have been in charge for three or more matches. Of his 35 matches he has won 26 (74.3%) and lost just nine.

Perenara also played a record 62nd Super Rugby match at the Westpac/Sky Stadium (one more than Julian Savea’s 61) although the latter did appear at this ground in the match against the British & Irish Lions in 2017.