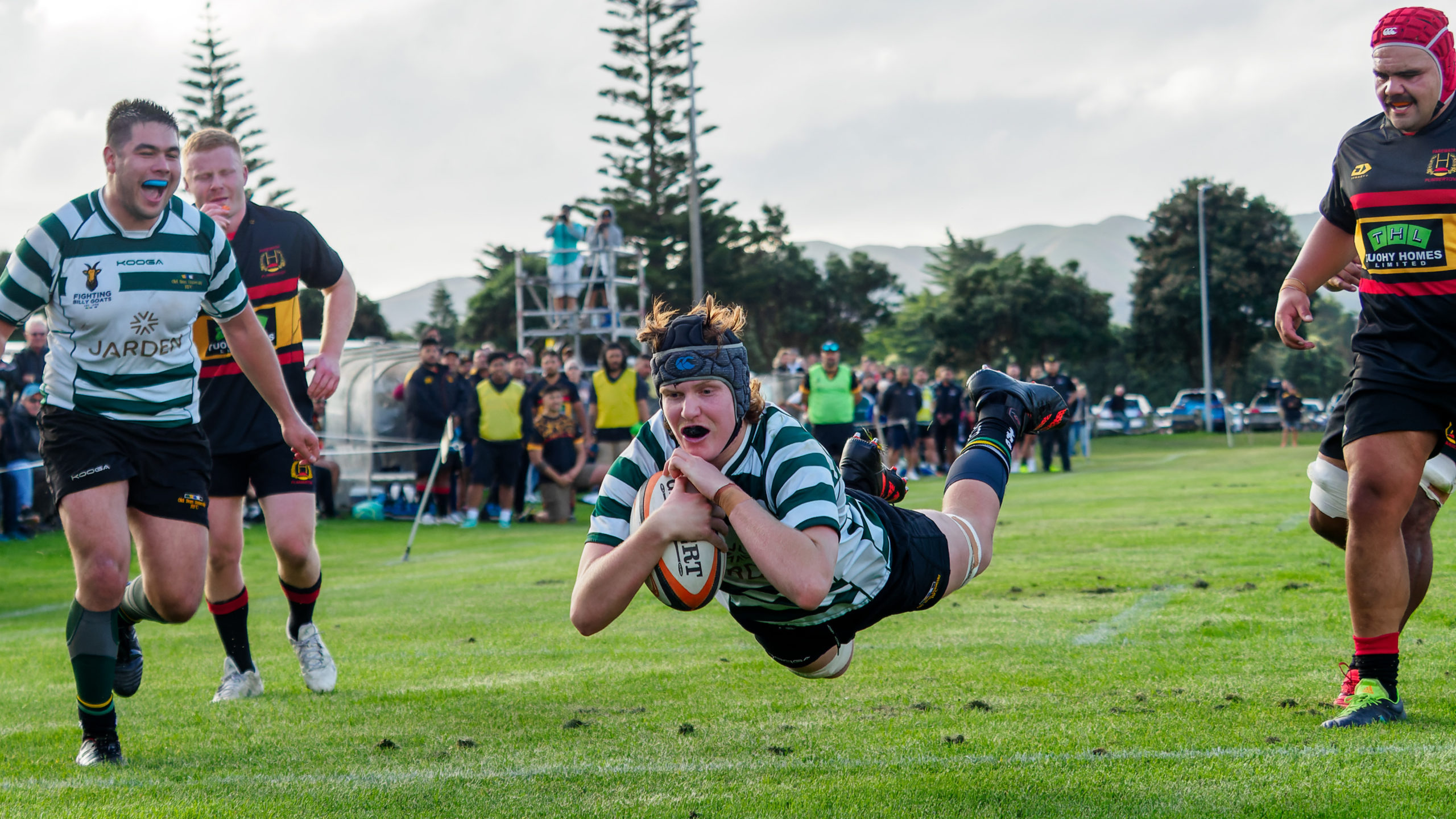 Monday morning edition: It’s the halfway point of Wellington’s Swindale Shield competition, and the competition remains wide open with several teams still harbouring designs on winning the title. Some big matches coming up for these contenders to cement their claims, not least the annual McBain Shield, this coming Saturday between Petone and Hutt Old Boys Marist.

It is understood, that Petone will have Hurricanes U20 players Harry Godfrey and Peter Lakai (Riley Higgins notwithstanding) for this match, before they join the Hurricanes U20s for a few weeks, along with a number of other players from other clubs in Wellington and in Manawatu (and throughout the country’s club rugby competitions).

it’s also week two of grading fixtures in college rugby and the second week of the Hurricanes First XV Festival in Napier.

The Hurricanes are heading to Sydney to play the Waratahs, at the rugby club-friendly time of 9.30pm on Saturday night.

Hutt Old Boys Marist and Petone were last in the Jubilee Cup semis together in 2010.

As reported last week, Daniel Mangin brought up his 100th Premier appearance on the whistle on Saturday. At the other end of the spectrum, Ollie Michie refereed his first Premier game, between OBU and Paremata-Plimmerton.

Some good form in recent weeks by Norths Women’s back Harmony Ioane. She has been playing for Norths since 2019, so this is her fourth season in Wellington club rugby. A versatile player in the backline, she has been playing in the midfield all season and on Saturday she moved in one to second-five and scored a hat-trick. This was her second hat-trick of her career to date, the first against Poneke in her second ever game in 2019 and the next one a 4-try haul against OBU in 2020. She has scored 25 tries in 32 games for Norths.

Great to see Eli Moata’a back and enjoying his rugby in Wellington. Motata’a played second-five for Paremata-Plimmerton and was in the wars on Saturday against OBU. In the first half he went down injured but eventually got up and carried on, later subbed off later in the second half. He made several big plays on attack and tackled well. Moata’a is a former Porirua College first-five, who brought his own fan club with placards and signage when he led his school to Beard Trophy success a few years ago. He started at Norths before heading overseas to Australia but was caught up in the Covid situation over there. Did we mention his haircut? He’s also rocking a big frizzy affro so is hard to miss!

Two promising first five-eighths in the Wellington College -Gisborne Boys’ High School school fixture on Saturday, with Wellington College’s Stanley Solomon a real livewire and excitement machine  and well known (or soon to be) to Wellington rugby audiences, and Gisborne’s Carlos Hihi also a player to watch. Hihi was also Gisborne’s co-captain and a natural on-field leader that his side rallied around in their 33-24 win.

Happy time it seems at union level around the temporary bylaws in place for Covid. As reported earlier, Tawa’s appeal against the decision to award them just the three points from their “match called off” against Paremata-Plimmerton a month ago remains to be heard. For the record, Tawa voted against the proposal.

Now there is more. Club Rugby has learned that last week Hutt Old Boys Marist – who voted for those temporary bylaws – submitted an urgent proposal that would allow matches at Premier and Premier 2 to start with uncontested scrums; whether that was motivated by their understanding of the status of their scheduled opponents on Saturday – Johnsonville – is unclear. Club Rugby understands that the proposal was passed by 9-5 with 6 abstentions (each of the 17 clubs, plus the WRRA, Wellington Secondary Schools, and the Centurions), with the actual wording and process for applying it to be determined this week.

Notwithstanding whether you agree with the idea or not, and you can argue it makes sense at Premier 2 level, we at Club Rugby are appalled that not only have the competition rules been altered mid-season, but that Wellington Rugby even entertained the matter at all. After all, there was an extraordinary meeting of the delegates in late March that seemingly resolved all of this.

The opening weekend of the Reserve Grade Mike Copeland Cup competition resulted in bonus point wins for the Petone Brotherhood, the Ories Vatos and the Johnsonville Cripples.  The Brotherhood beat the Upper Hutt Rams Pirates 43-7, the Vatos beat Stokes Valley 58-24 and the Cripples defeated the Poneke Ruffnuts 41-31.

The Norths v Upper Hutt game finished with a 31-30 win to Norths, with Boston Hunt emerging from a pile of bodies to score the winning try at the end. In 2015 Upper Hutt beat Norths 31-30 with Joyner Key scoring the winning try with the last play of the game.

Ruahei Demant was a shock appointment as new Black Ferns captain last week. She didn’t perform strongly on the Northern Tour, but has past leadership experience and a fascinating back story – read her profile HERE

Two Wellington players named in the squad, Ayesha Leti-L’iga and Jonah Ngan-Woo, both out of Oriental-Rongotai.

Folau Fakatava to start for the All Blacks. Is there a player in Super Rugby that changes a game like he does when he comes on? Aaron Smith is on auto pilot by contrast.

75-game Steamers first five and former All Black Mike Delany has been appointed Head Coach for the BoP Steamers this season.

Delany was an integral piece of the Steamers coaching unit last year and now takes the jump from Assistant Coach to Head Coach for the first time in his professional coaching career.

Thomas Umaga-Jensen is looking lean and playing good footy for the Highlanders. His carrying is damaging at times.

Welcome to the 2022 club rugby season Peniasi Tokakece. The Tawa veteran came off the bench for his side against Wainuiomata on Saturday. Tokakece and Fa’atonu Fili (who played for MSP against the Rams recently) have assumed the mantle as the two older statesmen of Wellington Premier club rugby.

Credit to the Wainuiomata girls intermediate aged team who played a selection of much bigger boys from a combined Hutt/Petone side on Saturday. Despite being on the wrong end of a big beating, Wainuiomata never gave up and were rewarded with a photograph together with the Women’s Rugby World Cup on Saturday.

The WRFU announced last week the launch of #RUGBYHERWAY, a new programme designed specifically for women and girls.
The provincial union recognises the importance of providing an environment for women and girls to develop within the sport in a supportive, welcoming, and safe environment, and realises that everybody experiences rugby in diverse ways.

The #RUGBYHERWAY programme will include junior skill sessions, junior holiday programmes, junior and secondary school development days for girls, and coaching and officiating courses for women-only, as well as offering young leaders and management development opportunities for women in rugby.

The objective of the programme is to provide fun, non-traditional development opportunities with the purpose of increasing the confidence and skills base for women and girls at all experience levels.

#RUGBYHERWAY provides a dedicated platform through its own social media channels and colourful branding for women and girls and is a chance for them to engage in a sporting activity that’s for females, by females.

The new programme is run by female activators, which not only creates new leadership pathways, but also provides an opportunity for females to learn the skills to coach young girls and other women.

Portia Woodman became the first woman to score 200 tries in the World Rugby Sevens Series. Canada’s Bianca Farella has 155 tries to reside in second on the all-time list. Michaela Blyde with 143 tries is the next leading Kiwi. England’s Dan Norton with 358 tries is the leading male try scorer.

The latest Rugby News is out – featuring a First XV Season Preview liftout.

See the front cover below: