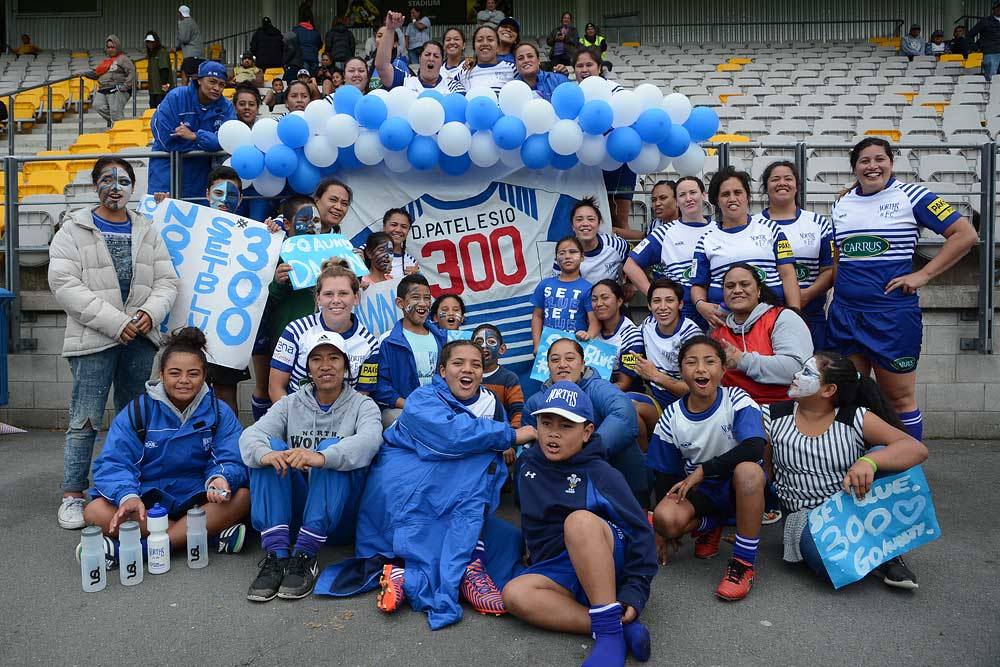 Above: When Dawn Patelesio played her 300th match for Northern United (Dawn top centre above the balloons). PHOTO: Norths Facebook.

The article below was written for New Zealand Rugby last week, reproduced here with permission.

The Wellington senior women’s club rugby competition officially began in 1990 and a personality who loomed large over the competition for nearly three decades was Dawn Patelesio. Last year her contribution was officially acknowledged when the medal for player of the final was named after her.

In 2016 Patelesio was happily retired until a conversation with Norths’ stalwarts Matt Rountree and Matt Poutoa formed the basis of an unlikely return.

Comprehensive research of the club records revealed that Patelesio had played 297 matches. The milestone of achieving 300 appearances for one club lured the then 39-year old back to training.

“I’m not into stats and awards but 300 is a pretty special number. I was in terrible shape and couldn’t really play 80 minutes. However, when I set my mind to something I’m really driven and as usual the club was so supportive,” Patelesio said.

April 23, 2016 was the day Patelesio cracked the triple-century. She walked out with her daughter Ahena through a guard of honour provided by the premier men’s team, and to a rousing reception from the Jerry Collins Stadium grandstand. Upper Hutt was slayed 146-0 with Norths scoring 22 tries. Veteran Helen Collins bagged six tries while Patelesio slotted three conversions as a secondary goal-kicker.

“There was doubt the game would even go ahead because Upper Hutt were really short of numbers but I’ve got so much respect for them. They fronted which couldn’t have been easy.

“It was an amazing celebration with people in the grandstand waving signs and friends and family I hadn’t seen for years turning up. It was the only time my Mum saw me play.”

One of six children, Patelesio was born in Porirua in 1976. Her mother Silia migrated from Tokelau in 1974 and the family lived on Mungavin Avenue, not far from Porirua Park (now Jerry Collins Stadium). Dawn’s first sporting love was football until she turned 13.

“I was a bit of a tomboy so I used to hang out at the Park playing all sorts of sports. I debuted for Norths against Petone in 1990. I started on the wing. I was pretty cocky until our fullback got injured and I had to replace her. I remember the ball came to me and the huge Petone pack were like wolves bearing down on me. I only had one option and that was to kick. I booted it back down their end and went, ‘wow that was pretty good.”

Patelesio settled at first-five where her educated kicking and superior vision set a standard in Wellington women’s rugby which hasn’t been matched. Norths have won 14 Wellington championships, almost all of them with Dawn running the cutter.

“I could kick long off both feet which I saw as a real advantage. When Laurie O’Reilly was Wellington coach he really encouraged me to develop that skill. I don’t think today’s women spend enough time learning how to kick properly and working the corners.

“Back in the day we were really competitive at Norths. We trained like we played. There were no niceties. It could be quite intimidating for younger girls coming in alongside hard Black Ferns like Riki Hemier and Vivian Rees but we didn’t apologise for that.

“We were lucky to always have good coaches. The Feite brothers, Sio Thomas, John Wright and Tali Lilo were just some of the men who helped me grow as a player and a person.”

Norths won their first Wellington title in 1994. The peak of Patelesio’s career was from 2002 to 2006 when Norths won the Tia Paasi Memorial Trophy four times and the first round Rebecca Liua’ana Trophy three times.  Additionally she played 19 games for Wellington and represented Manu Sina at the 2002 World Cup in Barcelona. Manu Sina was ninth but won three of four matches beating Ireland (22-0), Kazakhstan (14-3) and Wales (17-14).

Patelesio represented Tokelau in volleyball and touch rugby and even found time to help the Kiwi Ferns win the 2003 Rugby League World Cup.

“Wellington coach Grant Edmonds roped me in for a trial. When he told me I was playing prop I thought he was frigging crazy. It was hard, four games in two days.

“During the tournament we stayed in the same hotel as the Kiwis, that was Nigel Vagana, Ruben Wiki and the like, absolute superstars.

“Sky Sport came to interview the girls and I was asked ‘what other sports do you play?’ I said I represented New Zealand in synchronised swimming and everyone believed it.”

Off the field she was first employed by BP but she quit after her manager refused her permission to play for Wellington against touring Americans Puget Sound at Athletic Park. She has worked for ANZ for over two decades.

Patelesio finally stopped playing for Norths in 2016. Unfortunately she injured her Achilles in game 302. It’s unlikely any male or female in Wellington has played 300 Premier games for one club. Grant Griffith played 287 games for Poneke where starts were only counted as appearances. In 2021 Jason Judd brought up 500 games for the Wellington Axemen in various teams.

“The game has changed so much since I started. It’s more technical and sometimes too robotic for my liking but at least you don’t end up with as many ruck marks.”

“I first saw Dawn as a fresh faced school girl and my head turned twice when I saw her kick a ball. The game was still in its infancy and I had never seen a girl kick or pass a rugby ball the way did. She was well ahead of her time and I have no doubt if she was playing in the current era she would be a star.”