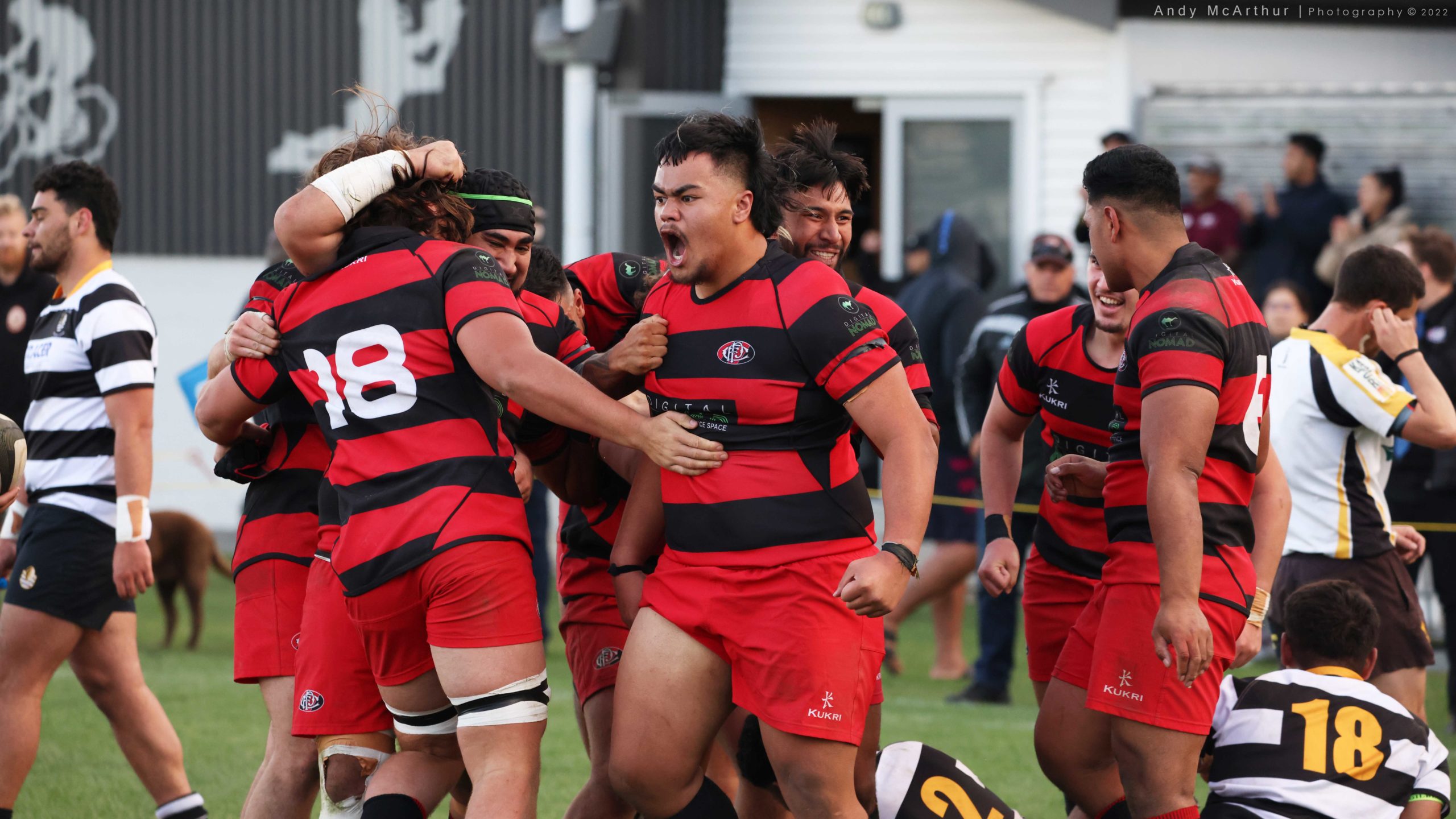 Petone remain unbeaten with six straight wins to start the 2022 Swindale Shield season after a tightly contested set of matches played around the region in fine, breezy conditions.

In the feature match on Old Timers’ Day at the Petone Rec, the home side beat Marist St Pat’s 28-19 to move to 27 competiton points, to be tentative joint leaders with Hutt Old Boy Marist.

HOBM’s match with Johnsonville on their Old Timers’ Day was unable to go ahead because of Covid in the latter’s squad, and both these teams tentatively get three points. But it is understood that this fixture might yet be played as a midweek catch-up fixture.

In the other five matches that were played this afternoon, Tawa’s 27-8 Chris Stirling Cup win over Wainuiomata at William Jones Park was by far and away the widest winning margin.

This was closely followed by Poneke’s 15-12 victory over Oriental-Rongotai for the famous Jimmy Grbich Shield, with fullback Pakai Turia kicking a 50-metre penalty from halfway to win the match with only a couple of minutes to play.

It was also dripping with drama at Ngatitoa Domain, where the passionate Paremata-Plimmerton Hammerheads came roaring back over the final 10 minutes to push Old Boys University close before going down 32-30.

In the battle of the low table dwellers at Hataitai Park, visitors the Avalon Wolves edged the Wellington Axemen 24-20.

It was Gala Day in Women’s club rugby, with three of the four scheduled sixth round matches going ahead.

Paremata-Plimmerton defaulted to Oriental-Rongotai, while Marist St Pat’s beat Petone 33-17 in the match on Petone 1 and Norths took down Wainuiomata 61-0 and Avalon beat Poneke 31-5 on the outer fields at Petone.

In some around the grounds Swindale Shield action, the match at Maidstone Park for the Terry Farrow Memorial Cup came alive with about 20 minutes to play.

Norths came back from a 30-17 deficit with two tries after lock and captain Waylon Baker had been red-carded for receiving his second yellow of the game.

Centre Losi Filipo’s second try of the game made it 30-24 to the Rams, before Norths got themselves back into the 22 and created pressure with phase play, before an all-in pile-up of bodies over the line resulted in the other Norths lock, Boston Hunt, coming up with the try. Referee Jamie Fairmaid saw the try being scored but checked both ways to his ARs, one of which confirmed the chalk-heist. First five Dale Sabbagh added the conversion and Norths took the one-point win.

Earlier, Rams No. 8 Toby Crosby scored two tries for the home side and wing Luke Bond one.

It was tit-for-tat throughout the first half and Norths went into halftime leading 14-13.

Further tries by Sabbagh, Crosby (his second) and Rams right wing Hokianga Morunga and a 50-m penalty by Rams fullback Tynan Barrett set up the final frantic stanza of the match.

Home side Poneke played into the wind from the swimming pool end in the first half. Both sides had early chances but neither could press for first points throughout the opening 25 minutes of tense action.

Finally, the pressure dam broke, with Poneke kicking for the corner and attacking from a lineout. A skip-out pass put fullback Pakai Turia into a gap and he crossed under the poles and converted to put his side up 7-0.

Ories prop Alex Fidow made a big run, resulting in an attacking scrum for Ories. This was held out, but Poneke conceded a yellow card, Ories took a quick tap and scored through Fidow. The conversion was missed, and Poneke went into halftime holding a perilous 7-5 lead.

The run of play remained tight after the interval, but Poneke was the next to score, increasing their lead to 12-5. Wing Isaac Moe-Jenkins was the scorer, following up and collecting a kick ahead that Ories let bounce and streaking away to the tryline.

Ories supporters willed their team to score next and their wishes were granted when blindside flanker Peteli Poasa crossed after a lineout and build-up in the corner. Halfback Declan Hay slotted the conversion, and it was now all locked up at 12-12.

The remainder of the game was a stalemate affair with more had-fought play. Turia and then Hay both had two penalty misses, before Turia called for the kicking tee once more from halfway and nailed what was the winner in the dying minutes.

Ories weren’t done yet, ending the game hot on attack but unable to break through Poneke in a vintage Poneke home-field defensive effort.

Petone beat MSP three tries to one in a match that never reached any great heights in terms of continuity and flow.

Petone scored tries to prop Iona Apineru, fullback Harry Godfrey and No. 8 Peter Lakai, their forwards on top for much of the game and nullifying the impact of MSP’s leading players in the pack, James Tuia, Vince Sakaria and Josh To’omaga. Petone halfback Logan Henry also had a good game for the Villagers.

The match was won with about 20 minutes to play, a late try to MSP first-five Chicago Doyle closing the gap to nine points, although replacement veteran back Ryan Setefano tip-toed down the sideline in the 70th minute and over line only to lose control of possession.

Old Boys University clung on desperately at the end to hold off home side Paremata-Plimmerton 32-30 at Ngatitoa Domain.

Paremata-Plimmerton went desperately close to marking captain and lock James Corcoran’s 100th Premier match with what would have been a memorable victory but were ultimately thwarted by the fulltime whistle.

In a grandstand final 10 minutes, Paremata-Plimmerton scored two tries to cut OBU’s lead from 32-18 to two points. With time almost up, first five Zane Edwards missed a 48-metre penalty attempt. OBU cleared their territory, but Paremata-Plimmerton were subsequently awarded another long range penalty closer in, but they opted to kick for the corner for a lineout instead. OBU’s lineout won the day with a big turnover, and OBU rode the clock to seal the win.

OBU had scored their first three of four tries from lineouts themselves, breaking open a tight game just prior to half time with two tries in the righthand corner, and they went into half time leading 20-6.

Both sides had exchanged penalties throughout the first 30 minutes, but Paremata-Plimmerton left wing William Teleaga’s sinbinning for a no-arm’s tackle was a catalyst for OBU scoring twice before the oranges. Openside Jack Riley scoring the first and right wing Issac Wilson the second

OBU then crossed for what proved to be their match-winning try, this time from general play, No 8 Dominic Ropeti and blindside and try scorer Tiaki Fabish combining. This extended OBU’s lead to 32-18, but the Hammerheads with a lively crowd behind them were not going to lie down.

At William Jones Park, Tawa went ahead of home team Wainuiomata 10-0, going on to lead 10-3 at halftime and then 27-3 until the very end of the contest when Wainuiomata scored their only try of the match through flanker Matt Jacobs.

Tawa had made a fast start when fullback Randall Bishop crossed soon after the opening whistle to put the visitors up 5-0. They doubled their lead with a 25th minute strike to right wing Isi Saumaki, before scoring three more tries in the third quarter of play to loose forward Lip Saveatama, mid-fielder Lua Lualua and party starter Trent Renata.

At Hataitai Park, it was a try on halftime to the Avalon Wolves that put them ahead 17-5.

Avalon held on to their lead to fulltime, seeing off the Axemen by a margin inside a converted try. For the Wolves, they scored four tries, through prop Anthony Lama, Michael Va’a, Esera Andrews and Boxier Fauena.

At Lyndhurst Park, the visitors actually led 7-5 at the interval but a blitz early on the second half put the hosts into a lead they didn’t relinquish, running in five tries to two in the second half.

Two Division 2 National Mutual Cup fixtures went ahead today, with Johnsonville’s game against Paremata-Plimmerton not going ahead. In these, Petone slew Wainuiomata 81-7 and the Axemen and Avalon second XVs met.

HOBM Green, OBU Green and Petone are the three unbeaten teams after the first two rounds of the Colts Paris Memorial Trophy.

Petone beat MSP 36-16, Avalon beat Wainuiomata 38-22, while the Wellington Junior Axemen were 24-21 winners of the Tawa Colts away at Redwood Park.

In the U85kg division, The Upper Hutt Rams, Johnsonville and Avalon were the three teams to win their third straight JC Bowl matches, in scores recorded today.

The Rams beat the Eastbourne Seagulls 26-21 in a big match, ousting the defending champions and in a match that is believed to be an opening round National U85kg Knockout Cup match (to be confirmed).

The Johnsonville Terrahawks had a 41-0 win over HOBM Green, while the Emaciated Wolves beat the Wellington Light Axemen 22-15.

Elsewhere in the U85kg division, the OBU Scallywags beat the Wests Roosters 77-8, Petone beat MSP 37-27 and Stokes Valley and Poneke met in the other fixture (result TBC).

All four Wellington First XVs lost to their Super 8 counterparts in the opening round of the Hurricanes Festival matches at Porirua Park today.

Gisborne had a notable size advantage, but Wellington College threw caution to the wind throughout and soon scored their second try to close the gap to 12-10. This try was scored first phase from an attacking lineout, with first five Stanley Solomon hitting the line and offloading to second five Jacob Kennedy. But Gisborne took control of the middle stages of the second half, scoring three consecutive tries to take a commanding 33-10 lead with about 10 minutes to play.

At this point, the beaten Wellington College team led by Solomon hit back with two sizzling consolation tries, with Solomon scoring one from a dazzling run from halfway, reminiscent of this solo try against Silverstream in last year’s mid-week traditional, and setting up the second with similar pace and skill.

Hastings led Silverstream 12-0 at half time and then scored a 90-metre runaway try early in the second half after Silverstream had been hammering their line which extended their lead to 17-0. From that point, Hastings went on to score once more and held their line against the Streamers.

It was also the opening weekend of grading matches in Wellington secondary school rugby. Results as follows: