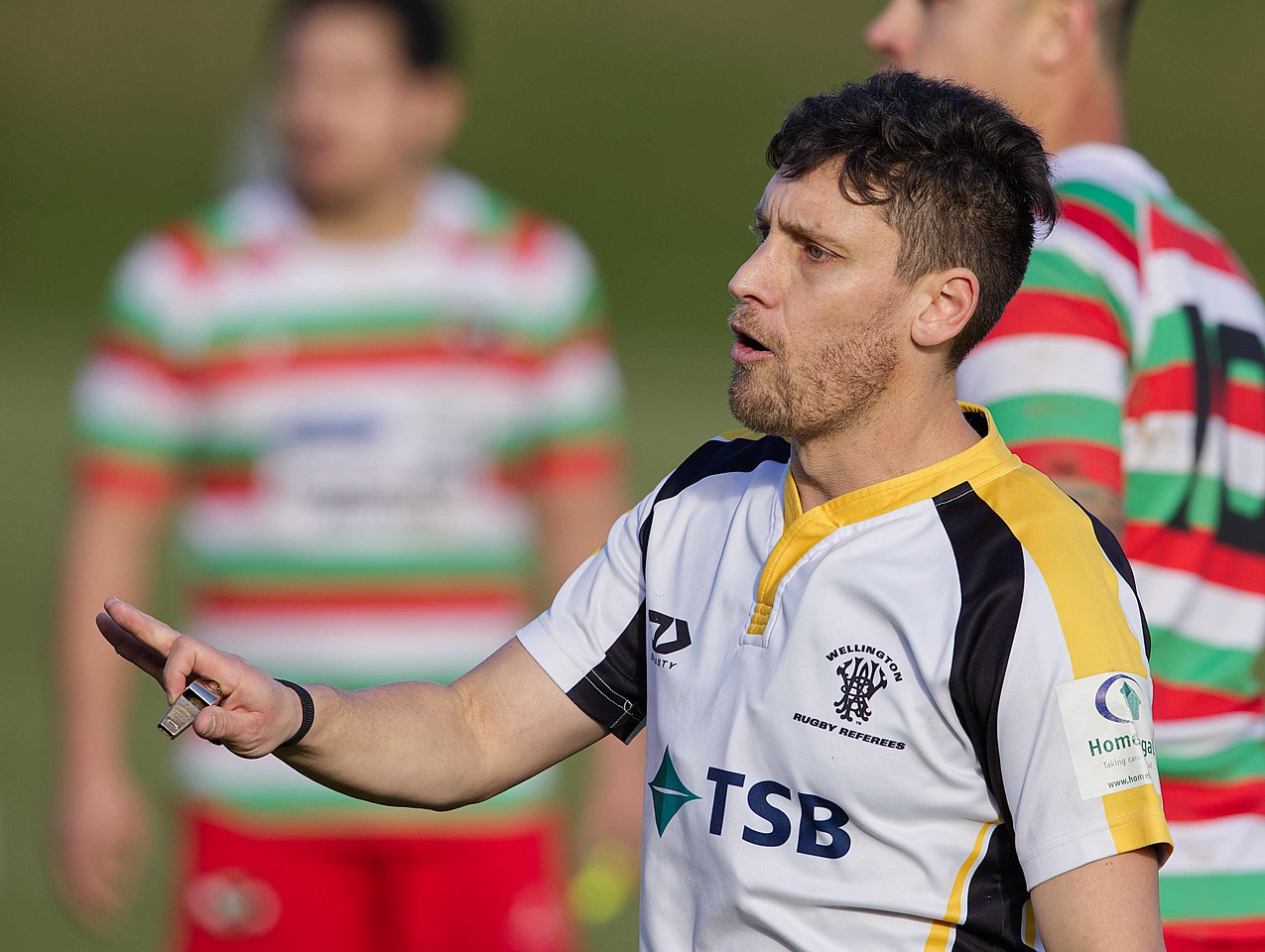 Few referees in the Wellington Rugby Referees Association (WRRA) get to earn their blazers.

The bar is set high at 100 Premier club rugby games, and on Saturday Daniel Mangin will reach that milestone in the Jimmy Grbirch Memorial Shield match between Poneke and Oriental-Rongotai at Kilbirnie Park.

Speaking with the Huddy Hui on Wednesday night, Mangin said it was a privilege and an honour to reach the mark, particularly in a fixture close to his heart being an old boy of Rongotai College.

Watch the interview with Mangin on the Huddy Hui at the link above.

“It’s going to be a special occasion. Being a Rongotai College old boy you traditionally either go to Poneke or to Ories, and being the big eastern suburbs derby, where I grew up, all the ducks lined up for me for this opportunity to make this my 100th game.

“Poneke versus Ories is also always a tightly contested, often free-flowing game, so as a referee that is what you want.”

It was at school in Kilbirnie when it all started for Mangin.

“It was in year 13 at college. An email went out to the schools, I went out to the meeting, and it progressed from there. I wasn’t going to referee straight away  because I was playing as well, but a bit of arm twisting and making it work went on so I could referee and then play on the same day and I fell in love with it.”

As a player, Mangin was an Ories junior and a hooker with ex-Hurricane and Samoan international Motu Matu’u alongside him playing prop, as well as ex-Samoan international Manu Leiataua. He stopped playing rugby in his first two years of college but re-started in year 11 and one of his teammates was 200-game Poneke back Ben Huntley.

As a referee, Mangin initially did it for fitness and fun for five years before being encouraged to develop further and he passed his level 2 refereeing qualifications and was rising through the ranks. He made his Senior 1 [Premier 2] debut in 2010 and refereed 31 Senior 1 and Senior 2 [Premier Reserve] club rugby encounters before making his Premier debut.

In between Mangin took the year off in 2013 to do a bit of travelling but returned the next year and made his Premier refereeing debut in the last week of the first round 2014 Swindale Shield.

“My first Premier game was at Helston Park, between home team Johnsonville and Petone, I can’t remember too much of the game, but Riki Flutey was playing first five for Petone.

“That was an awesome experience. I AR’ed a club rugby semi-final on the Saturday and left my watch in the changing rooms then so I had to get myself a new watch on Sunday morning. The tv cameras, the big crowd and sunny day at Porirua Park made for a great day. I remember the runaway try by TJ Va’a.”

He has also refereed the Wellington club rugby Women’s final one season. “That was a humdinger, it was the first final that went to extra time. Eketahuna has a conversion on fulltime to draw it and they missed it. I also had a hair-pull in that game, so from a male perspective that was a bit of a curve-ball event to rule on in that match.”

A standout club rugby match he has refereed is the Marist St Pat’s versus Tawa Jubilee Cup semi-final in 2015 (see video below). “I had MSP’s Isaac O’Connor in the sin-bin after two minutes, then the game opened up and there were several lead changes and was just a really good game to be part of. Ben O’Keeffe was one of my ARs that day as well.”

Asked who some of the biggest personalities are to deal with in Wellington senior rugby, Mangin said all the clubs have passion and lively supporters. “There are a few, but one is the Norths 100 Club [supporters club]. We don’t always see eye to eye, but I admire them for their passion and support.”

What about sideline behaviour and abuse?

“It was a bigger problem, but we got over that hump three or four years ago when the zero tolerance for abuse came through the colleges. I know New Zealand Rugby are trying to help out, setting up a database and working on this issue.

“I have had a few ugly moments over the years that made me question doing this but I am doing it for the love of it and I know there is always one bad egg that can spoil it.”

What about the proliferation of red cards in rugby, perceived or otherwise?

“It comes from the top, from World Rugby with player safety, for example. Plus, there is the luxury of the TMO, which I am for but it is in some ways a hindrance by slowing the game down. For us in club rugby we only get one shot at it.”

Aisle be Back: Hurricanes v Blues and 50th cap for James Blackwell