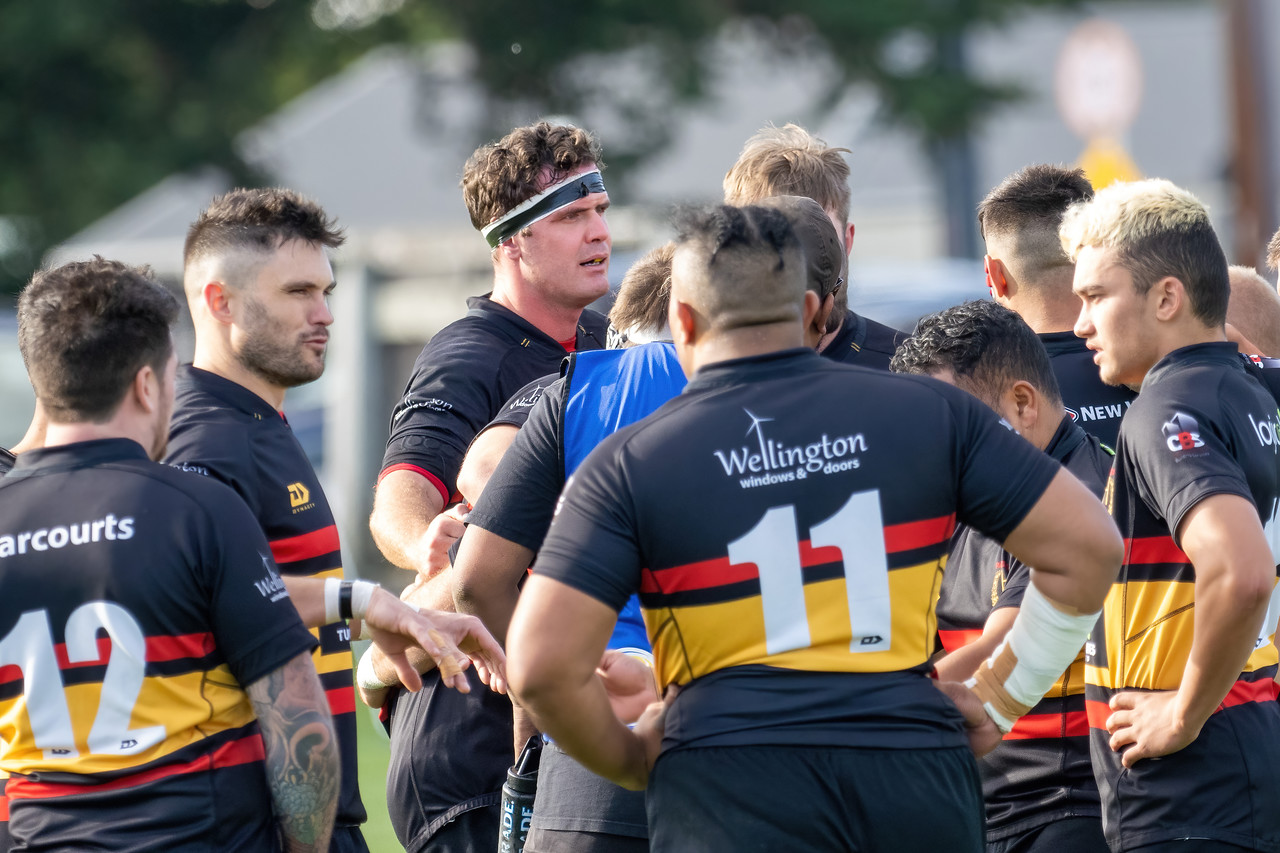 That is what Paremata-Plimmerton captain and lock James ‘Smokey’ Corcoran did at the start of 2016, and this coming Saturday he is in line to play his 100th Premier match for his side against his former club, Old Boys University.

Speaking on the eve of his 100-game milestone match, Corcoran is upbeat about his team’s improvement this season.

“It is good going into these games and knowing that we have got a competitive chance and that we can take on anyone, “he told Club Rugby in conversation this week.

With new head coach Gerrard Fa’asavalu, who was previously with Northern United, and a group of new players the Hammerheads have so far beaten Avalon (43-18), had a no-result against Tawa (Covid), had two narrow losses to Hutt Old Boys Marist (22-26) and Poneke (22-23) and one larger loss with a losing bonus point to Marist St Pat’s (20-49).

The losses to the Eagles and Poneke went down to the wire, while the defeat to MSP last start was the result of a first half blowout by the home team, partly attributable to a disrupted match-day build-up by the Paremata-Plimmerton boys. “We started the game a bit flat. We scored first but then it was all MSP after that. We got a rark up at halftime and that is when we started to do things we had been trying to do and it was good to come away with four tries.”

“The coaches that have come in have brought a new focus on technique and technical ability, which has really raised the skill level for a lot of guys and means that the systems are flowing a bit better than they have in previous years.

“They have also brought in a whole lot of excitement, which has made it a lot more fun at training and brings out the enthusiasm in the players. That’s infectious, even for the older boys like me!”

Celebrating a try with teammates in the 43-18 win over Avalon in the opening round earlier this season.

After moving to Whitby, Corcoran joined Paremata-Plimmerton in the 2015/16 off-season from Old Boys University whom he played four seasons for, mostly in the Premier Reserves but he also thinks he made about 15 appearances off the bench for the OBU Premiers.

Prior to that he played a season of social rugby for the OBU Teddy Bears, that team finishing that season as OBU’s social team intraclub Jackie Ruru Shield holders, and before that played in Dunedin for a couple of years whilst a university student at Otago.

So, it is fitting that should he get through training this week unscathed, he will play his 100th match for Paremata-Plimmerton against Old Boys University.

Paremata-Plimmerton has found OBU tough to contain in recent years, having lost six straight to them since reinstatement to the Swindale Shield at the start of 2015.

“I don’t score many tries, but I have scored three tries against OBU over the past four or five years, so I actually have a good record against them personally.”

On his way to the tryline against HOBM in their recent 22-26 loss.

James’s older brother Will used to play for OBU as well. “He was a fast wing for OBU. He was a 10.8s 100m sprinter back in his day and his nickname was Wendell after Wendell Sailor for the comparisons or otherwise with the then Wallabies wing.” Will/Wendell now lives over in the U.K.

Included as part of the OBU connection at Paremata-Plimmerton are Alex Taimalietane and Stu Simonson, who is James’s brother in law and a key reason why he headed north too. “I managed to rope him in to come and play for Pare-Plim at the end of his career over a few beers when we were out fishing.”

Both Alex and Stu are taking a leading hand running the Hammerheads Pups Colts side.

“When I first came to Pare-Plim I tried to convince a few OBU guys to come with me. We had a successful team and played in the Hardham Cup and beaten the Norths Premiers in a match at Ian Galloway Park [25-24].”

“That was a highlight for me in that team, I still haven’t beaten them in any game for Pare-Plim.” Pare-Plim play Norths for the Ivan Hardgrave Trophy in round in the 13th and last round of the Swindale Shield on 25 June.

Corcoran’s debut Premier match for Paremata-Plimmerton was against MSP at Evans Bay Park at the start of 2016. “We lost [23-33], but we were actually quite competitive that year.”

“A lot of the core of the team has stayed the same since then, with other guys like Shane Hedges, Teariki Kie Tonga, Jonathan Sabo, Matt de Terte, Alex Hinchliffe, and Danny Herewini. Matt has just come back to us and is playing in the Premier 2s, while Danny played his 100th game two weeks ago and I had played almost all his games to the milestone with him.”

What about other highlights?

“Overall, just the opportunity to play all the top-level players, like Dane Coles, Ardie Savea and the Super Rugby players like James Blackwell and others when they play in club rugby.

“Playing with Richard Judd when we beat Johnsonville, Wellington and Poneke in 2018 as well.”

Winning lineout ball in Paremata-Plimmerton’s 23-20 win over Johnsonville in 2020.

What about the nickname ‘Smokey’?

I got that when I was at school at Wellington College, and it sort of followed me to OBU. I thought I had lost it but my old Coll mates resurrected it.”

James was in the Wellington College First XV in 2006. “Some other well-known Wellington players in that team included then 15-year-old prop Jeff Toomaga-Allen, Jared Kahu, Joe Hill, Buxton Popoalii, James So’oialo, Isaac O’Connor and others.

“We won the Wellington Premiership title that year, beating St Pat’s Town in a mid-week final at the Hutt Rec.”

He played a couple of seasons down at Otago whilst studying genetics, before moving back up to Wellington in 2010 to Victoria University to study for a law degree, the career he practices now.