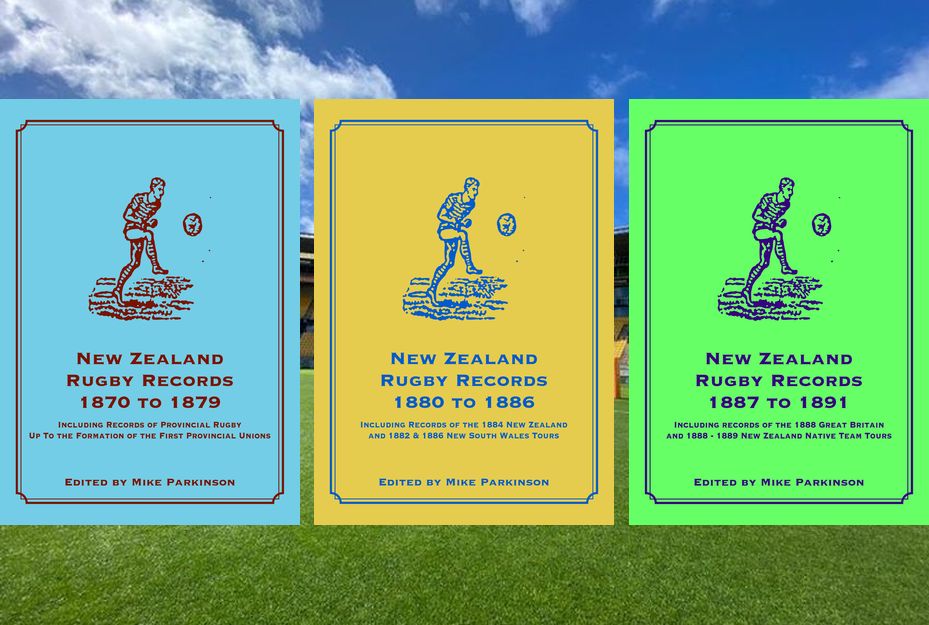 Since 1935 the Rugby Almanack has been the annual, official, exhaustive record of rugby in New Zealand.

The first official game of rugby in New Zealand was played on May 14, 1870 when Nelson Club beat Nelson College 2-0 at the Botanical Gardens.

The first New Zealand representative team was selected in 1884. Legendary tours by the All Blacks to the UK and France happened in 1905 and 1924, but until 1934 there was no annual account to recap the facts of each season.

Michael Parkinson is a rugby enthusiast from Motueka now living in Island Bay. Manfully he has been researching the history of New Zealand first class rugby from 1870 to 1934.

Recently he published the preliminary results of that research, three books spanning 664 pages documenting rugby in New Zealand from 1870 to 1891.

Like the Rugby Almanack details of matches such as date, ground, score, referee and participating players are listed alongside a sundry of miscellaneous information.

“A few years back I put together a book on the history of the Golden Bay-Motueka Union.

Following on from that I sought to better identify early players in Clive Akers ‘New Zealand Rugby Register,’ a remarkable volume listing all New Zealand first class players from 1870-2015. From that research I formed the idea of extending that information into books in a format similar to the New Zealand Rugby Almanack. I’ve been working on this project for five years,” he responded.

Parkinson’s interest in the game extends six decades. From about the age of nine he started assembling scrapbooks of All Black matches. He played First XV at Motueka High School before head injuries brought on-field involvement to a close.

An avid reader he identified Ron Palenski and Arthur Swan as two of his favourite rugby writers. What stories from 1870 to 1891 captured Parkinson’s imagination?

“A couple of early players who would have been great to watch were Joe Warbrick and Jack Taiaroa. Both were clearly great runners with the ball and challenged any defence of their day. Tom Ellison was also a superb player. Yet (perhaps understandably) none of these three would probably feature in any modern listing of top NZ players.

“I’m in awe of the New Zealand Native Team who toured the UK and Australia in 1888-89. They played  119 games, including Australia rules matches, from June 1888 through to August 1889. A particular challenge for my research was to find team lists from all the matches played in Britain. The last few were found in microfilm of newspapers held by the British Library in London which my daughter in London copied for me.”

Most official records list the Natives as playing 107 matches. It wasn’t the only amendment Parkinson was able to make to the official record. All Black Frank Surman actually has the birth name John Francis Firkins according to an 1877 New South Wales Immigration record. Did you know in 1873 Thames Football Club held Auckland to a 0-0 draw in a match contested over four half-hour spells attended by 200 spectators?

Parkinson was keen to stress his effort wasn’t absent of support.

“There have been many people who have generously assisted with my research.

Stephen Berg at the New Zealand Rugby Museum has always been helpful in providing access to items at the museum. I’ve worked with people who’ve undertaken their own research and many provincial unions have given me access to their storerooms to look for old team photos and information.”

Finals day polls – who do you think will win the finals?