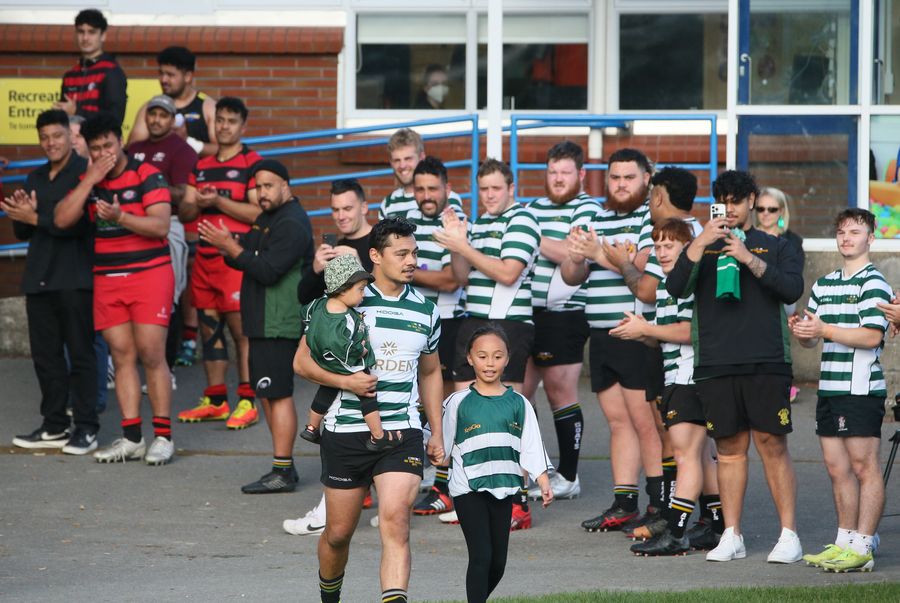 Saturday evening round-up: The big guns of recent seasons came out to play on the fifth afternoon of Wellington club rugby today.

The one game that went all the way to the wire was Johnsonville versus Upper Hutt Rams at Helston Park, with the result being a 21-21 draw and the Rams scoring an unconverted try at the death to tie it all up.

Tawa were the day’s biggest winners, caning winless Avalon 86-5 at Lyndhurst Park, while MSP put down Paremata-Plimmerton’s hopes by beating them 49-20 at Evans Bay Park.

Old Boys University were emphatic 51-18 winners over Poneke at Nairnville Park, after trailing at halftime.

Petone easily accounted for winless Wellington 71-19 at Hataitai Park, whilst the HOBM Eagles pulled clear of Wainuiomata to beat them 33-6 at the Hutt Rec.

The seventh result of the afternoon saw Oriental-Rongotai beat Northern United 35-17 at the Polo Ground.

It was also the fifth round of the Women’s club rugby competition in Wellington, with all four matches going ahead and some high scoring.

The highest score of the day was from the Polo Ground where Oriental-Rongotai overcame Poneke 98-0. Ayesha Leti-L’iga scored seven tries and kicked four conversions for a 43-point haul for Ories. Fullback Ivana Samani also scored a hat-trick.

At William Jones Park, the Avalon She-Wolves beat Wainuiomata 43-17, while at Porirua Park Northern United defeated the Petone Ponies 42-12, for their fourth straight win in the Rebecca Liua’ana Trophy.

Norths forwards paved the way for victory over Petone, with locks Te Amohaere Ngata-Aerengamate and Sanita Levave especially damaging with ball in hand and disruptive at the lineout.

In a hot start, Norths scored the first two tries through slippery fullback Julie Tusa and wing Ofa Tuangalu. Petone responded when wing Sianne Dougherty retrieved a hopeful kick to the shock of the defence.

Petone was often in retreat unable to contain Norths forward power. It wasn’t a flowing spectacle and was reduced to uncontested scrums. However, Norths centre Harmony Ioane scored two tries and looking threating and centree Tyler Bentley-Tiaru scored a cracker, winning the ball back from a kick-off and weaving past multiple defenders. There was a long injury break just before halftime, as Norths went into the turnaround leading 32-12. There were only two tries scored in the second spell.

Big results were the theme across the second round of the Premier 2 competitions. In the Division 1 Harper Lock Shield Tawa’s long winning streak continued as they thumped the Upper Hutt Rams 76-0 while MSP touched up their HOBM cousins by 55-19. It was closer at Nairnville where OBU saw off Poneke by 32-19, with the closest game of the day being at the Polo Ground where Ories edged Norths 24-20.

In the Division 2 National Mutual Cup Petone dispatched a struggling Wellington side 93-12, Avalon also made it two-from-two beating Pare-Plim 48-21, and Stokes Valley got on the board by prevailing 17-7 over Johnsonville in an arm wrestle at Helston

It was the opening round of the Colts Paris Memorial Trophy competition today as well, with all five matches as scheduled going ahead. Defending champions and perennial front runners OBU Green beating the Poneke Colts 57-12 at neutral Newlands Park. MSP were also big Colts winners today, beating Tawa 51-19 at home. The other three U21 matches saw Petone beating Paremata-Plimmerton 36-20, HOBM Green beating the Wellington Junior Axemen 26-5 and Wainuiomata beating Johnsonville 29-19.

An upset headlined the results in the Under 85kg JC Bowl, as the OBU Scallywags pulled off a smash-and-grab to take down defending holders Eastbourne 31-24. Avalon and the Upper Hutt Rams both met stronger resistance than last week’s results showed, the Wolves overcoming a red card and a couple of yellows to see off Petone 19-5 and the Rams beat spirited Wellington Axemen 28-12. In other results MSP pitched a 34-0 shutout over HOBM, Stokes Valley did the same 55-0 against strugglers Wests, and Johnsonville overcame Poneke 21-10 in the early game of the day.

In some around the grounds Swindale Shield coverage, it was Old Timers’ Day at both Nairnville Park and the Polo Ground.

At Nairnville Park, in the 37th tussle for the Beet Algar Rosebowl, Old Boys University beat Poneke 51-18 after trailing 7-10 at halftime.

In fact, the Billygoats were behind 15-7 early in the second spell when Poneke loosehead George Jacobs twisted over in the right corner. However, OBU soon took control through superior impact from the bench, fast, direct running and poor Poneke discipline.

A quick tap from a penalty saw halfback Kyle Preston cut Poneke’s advantage to one. A short while later centre Ty Poe busted clear and OBU gained a lead they wouldn’t surrender.

At 21-15, Callum Harkin (OBU) and Pakai Turia (Poneke) traded penalties to make it 24-18 before the Goats roared into action, scoring 27 unanswered points. Highlights included a 30-metre try from blindside Tiaki Fabish, fending aside a defender with distain, excellent work from the lineout leading to a Wirangi Parata try and the rampant form of No.8 Dominic Ropeti who broke the line at will and won at least four clean turnovers. Halfback Kyle Preston played with growing authority and Callum Harkin kicked 16 points.

OBU enjoyed most of the early possession and territory but were resisted by fierce Poneke defence and two Nick Robertson try-savers. Turia opened the scoring with a penalty before OBU hooker Tobias Christensen rumbled over from a lineout drive. Poneke wing Isaac Moe-Jenkins has been in sizzling form this season and he slashed through from a scrum to make it 10-7, the halftime score.

OBU prop Samson Konefernisi and wing Isaac Wilson were huge off the bench. For Poneke young locks Maea Team-Schmidt and Ezekiel Fiso are players to keep an eye on. Rhys Reiri had early success in the scrums.

Old Timers’ Day at Miramar saw Ories and Norths fight out an even first 10 minutes that was broken by a try scored by right wing Reuben Va’a and converted into the wind by halfback Declan Hay.

Ories scored their second try a little while longer, coming from an attacking scrum with Hay combining with No. 8 Siaosi Lavea. Hay’s conversion put Ories up 14-0 after 25 minutes.

Norths hit back and attacked from a lineout, mauling from the set-piece, picking and going and then openside flanker Callum Watts-Pointer crashing over. The conversion by halfback Luke Kapene was good and Ories’ lead was 14-7.

The flurry of scoring continued right up to halftime, first with a try to Norths with left wing Junior Time-Taotua collecting a chip and chase and then Ories left wing Teni Tautua’a bursting through to score under the posts. Ories led 21-12 at halftime.

Norths immediately closed the gap after the break, after Kapene made a break from a scrum and put right wing Junior Time-Taotua away for a try. Ories now led 21-17.

Ories sealed it at the end with a 30 metre break by wing Va’a off a lineout, putting left wing Tautua’a away in the corner. This was followed by a final penalty on fulltime for the Magpies.

The most absorbing Swindale Shield game of the day came at Helston Park, where Johnsonville and Upper Hutt finished deadlocked at 21-apiece.

The first half gave little indication of the drama to come, as referee Ethan Loveridge’s whistle got plenty of work as both sides repeatedly found themselves isolated and guilty of holding on in the tackle. The Rams opened matters through a sweet backline set move off a scrum after 8 minutes that put Hurricanes fullback Josh Moorby across, but the only other scoring action was a Scott Svenson penalty as they went into halftime with a 10-0 lead into a dying breeze.

The second half though was an engrossing affair. The Rams were able to extend their lead even though evergreen hooker Eli Hunt spent time in the bin after a controversial penalty against Hawks fullback Jason Tuitama.

But with 30 minutes to go the Hawks kicked into life. Firstly Johnsonville No.8 Sam Green burst through to score, converted by Mark Sutton, then Green repeated the dose from close range. When Sutton converted from out wide the Hawks had taken the lead. A third Svenson penalty put the Rams back in front, but after another Rams card Sutton darted over from a scrum and converted with just moments left on the clock.

But the Rams were able to gain possession from the kick-off, got some go forward under penalty advantage from replacement No8 Toby Crosby, and his hopeful pass back inf-ield was snapped up by Todd Svenson who scampered over with time well up. That left Scott Svenson with a kick to win the game but it drifted wide, leaving the teams as they started

It was also close at the Hutt Rec, where HOBM only led Wainuiomata 7-3 at halftime, courtesy of a sixth minute try to first five Anthony Utanga, converted by fullback Zane Ainslie.

Wainuiomata first five Justin Wilson replied almost straightaway with a penalty and the next 30 minutes went scoreless in an arm-wrestle. Wainuiomata also lost No. 8 and captain Teru Time in the middle stages of the half.

Wilson kicked his second penalty early in the second half to narrow the gap to 7-6. They lost a second player to the sin-bin, wing Jason Love, but the match remained in the balance for a further 15 minutes.

It wasn’t until the 58th minute that the Eagles broke the shackles scoring their second try. This was followed by three tries in the final 10 minutes, including the bonus point try to lock and captain Jordan Gillies, that sealed the match. The final score was 33-6 to HOBM.

At Lyndhurst Park, Tawa scored 14 tries against the Wolves. The tries were shared around, after right wing Ryan Preston scored the first two tries in the opening few minutes. When flanker Weston Sao crossed soon after Tawa were establishing control.

Tawa went on to lead 39-0 at halftime, more than doubling their score in the second half. Avalon’s only try was scored by Jordan Sului later in the game. For Tawa, left wing Andy Tilo and flanker Akira Ieremia also scored two tries each.

Levave and Norths hitting their stride in Swindale Shield