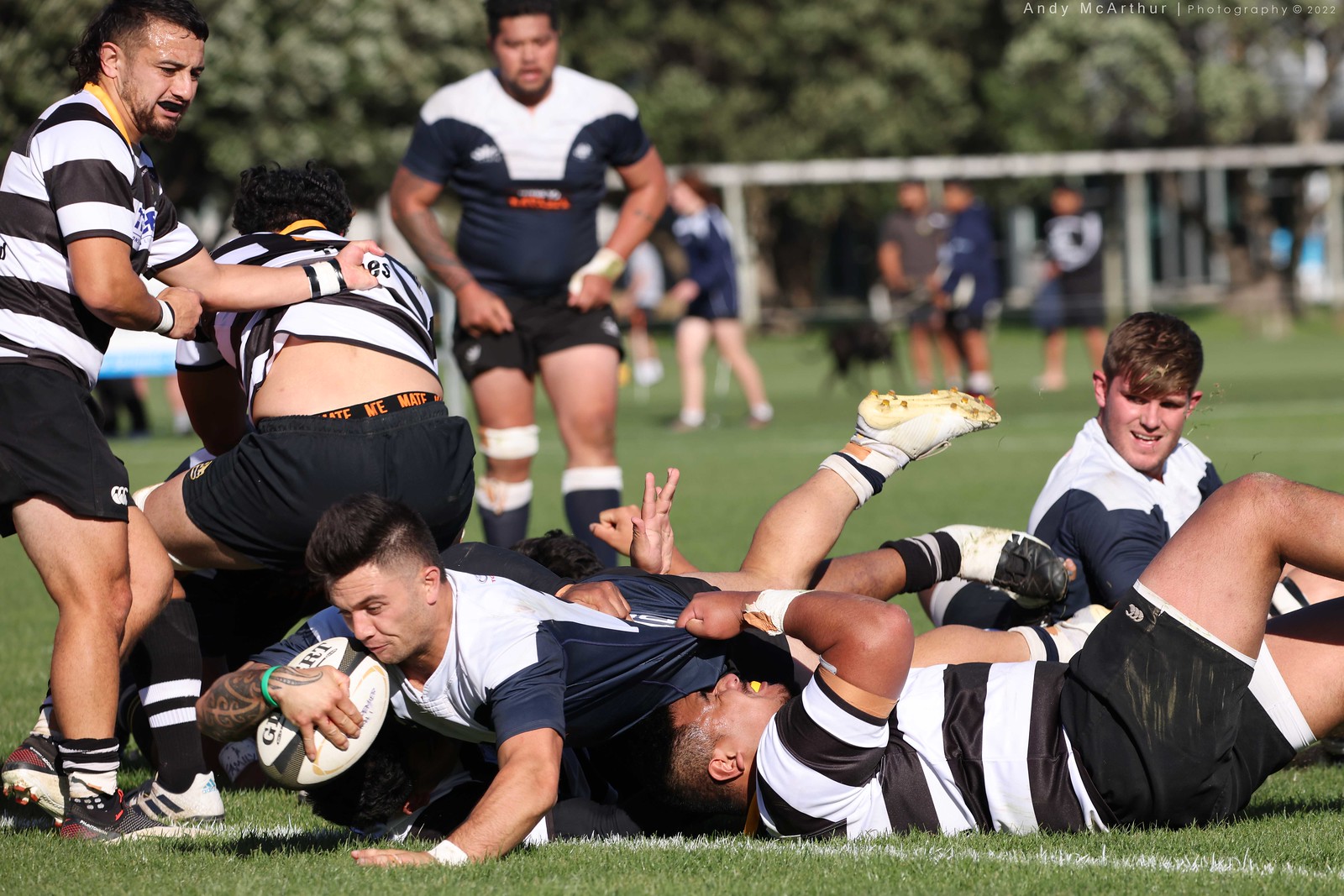 Logan Henry scoring the most recent of his 26 Premier tries in 73 appearances for Petone since 2017. Henry spoke to the Huddy Hui about Petone, linking up with Manawatu and making his debut for the Hurricanes last month. PHOTO: Andy McArthur.

Logan Henry’s move to Manawatu at the start of 2021 in search of provincial rugby paid off twelve months later when he made his Hurricanes debut against the Highlanders in the Super Rugby Pacific competition.

“It was a fairytale for me and something I will never forget,” Henry told The Huddy Hui (watch below) on Wednesday night.

Henry had joined the Hurricanes as injury cover for TJ Perenara and was involved in the Hurricanes pre-season and was inside the squad when they temporarily relocated to Queenstown. How did his Super Rugby debut come about?

“Jamie Booth injured his leg at training on Tuesday, then on Thursday we had our meeting and coach Jason Holland said I was selected on the bench for the game.

“After training is when it all sunk in, I rang my parents and told them, told my partner.”

Henry played the last 20 minutes and scored a memorable try in the 21-14 win.

What about the try?

“I just managed to run a good halfback line, following players, and managed to dot down,” he modestly reflected.

“The overall experience out there was unreal, when I was a little kid I used to get out at Waterloo train station and head into the games with all my family and a couple of mates wishing that one day I would be out there playing.”

Henry had been working hard to earn a Wellington Lions contract since making his debut in club rugby for Petone at the start of 2017 and scoring two tries against Northern United in his maiden Swindale Shield appearance. In 2020 he helped Petone make the Jubilee Cup semi-finals for the first time in a decade, finishing the competition as the leading points scorer.

“I always wanted to play for my home team, I gave it my all, but I just couldn’t crack it.

“It is always good to have a change, so I headed up there to give it a go and try something new and it paid off.

Henry joined the Feilding Old Boys Oroua club and was immediately comfortable in the environment. He praised the culture of all the players.

“Overall, we have a good bond up there, a mix of people who all come together with the common goal of wanting to train hard and get up together in the top level.”

Henry earned nine caps for the Turbos in his debut NPC season in 2021.  Manawatu under the captaincy of Braydon Iose won three more matches than what they did in a disastrous 2020. As an added bonus, Henry got to play alongside All Black Aaron Smith.

“I wasn’t thinking negatively about him coming in and taking my position, I was thinking of it being a huge opportunity for me to gain the experience of learning off the best halfback in the world. He is a very smart man that knows the game so well, so I learned a lot from him.

“I think he was the defence leader in the All Blacks so just little things like defensive structures and where people would be and what to look for, and this is an area that I have brought back to Petone this season to help them.”

The art of the pass. Henry in action earlier this season against OBU.

Henry is back at Petone now, because his FOBO club team in the Manawatu Senior A competition went into abeyance over the off-season, which was unexpected when it happened as he was looking forward to heading back at the end of summer.

He will be looking to return to Manawatu at some point during the season.

“I just got a message from Old Boys Marist who are looking for a halfback, so I think I am going to link up with them for the last three or four games.”

“Petone will still win the Jubilee Cup without me,” Henry laughed. “We have a good squad this year!”

Petone have won all their four Swindale Shield matches this year.

“It’s been going good so far, the last two or three years we have been bringing in lots of new and young players who are now starting to get older and experienced at Premier level.

“It’s quite exciting having those Hurricanes U20 players, Riley (Higgins), Peter (Lakai) and Harry (Godfrey), and for some players seeing those guys giving it their all gives them a boost as well. We had the likes of Jack Ross playing his 100th game last week and Carne Green with his 100th this week. Then the likes of Lester Maulolo back firing, after injury problems. It is good we have depth like that.”

Henry scoring two tries for Petone, against Ories in 2020 and against the Upper Hutt Rams earlier this month.

“The McBain Shield is special, from the build-up during the week to match-day itself with the packed grandstand and the ringed field of spectators.

“It’s always down to the wire and has plenty of drama so it’s a big game, which I love.”

“Yes, that was another special moment, the first time beating Wellington College. And to play that one on my home ground Petone and with the likes of Carne Green and Jack Ross watching on. They had a few opportunities to kick a penalty but they kept tapping it.”