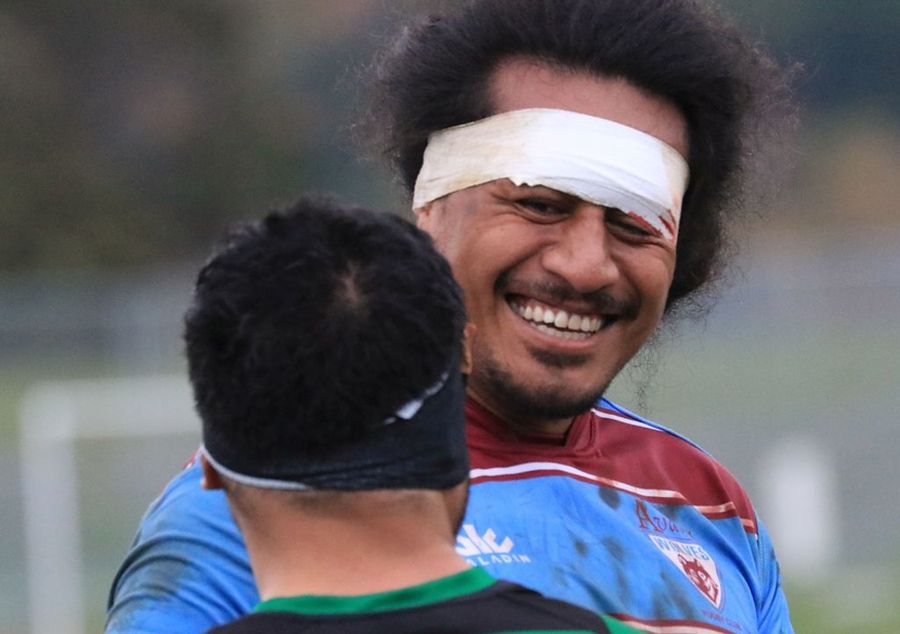 It’s October 10, 2015 and over 50,000 spectators are crammed into St James Park, Newcastle. Samoa are engaged in a must-win tussle with Scotland at the Rugby World Cup. The scoreline is tight when Samoa has a dropout on the 22.

Lock Teofilo Paulo is standing beside hooker Manu Leiataua. A decade earlier the pair had been high school adversaries, Paulo at St Patrick’s College, Silverstream and Leiataua at Rongotai College.

“I looked at Manu and said, ‘bro what the hell are we doing here.’ We both cracked up. It was one of those far out moments,” Paulo laughed when reflecting on memorable moments in his professional rugby career.

Paulo played 37 test matches for Samoa between 2012 and 2019. He has plied his trade around the world. In 2022 he’s captain of Avalon. This past Saturday the lock scored two tries in a typically robust display against Johnsonville.

“Johnsonville is pretty good. They’ll definitely win more games than what they’ve done in the past. It was disappointing we didn’t turn up and let the score run away on us.

“It’s been a tough few seasons which makes it difficult to recruit players but we have to make do with who we have and build on small successes.”

Avalon are winless after the first month of the Swindale Shield but the homecoming of Paulo is a major coup. There have been encouraging moments in the first four games and a figure of mature stability is invaluable for younger, raw talent.

Teofilo Paulo (left) locking Avalon’s scrum with Neru Lafaele (headgear) against Paremata-Plimmerton in the opening round of the Swindale Shield this year. PHOTO: Stewart Baird.

Paulo was born in Kenepuru in 1987. He played league for St George and North City, switching to rugby in his first year of high school at Bishop Viard College. His passion for rugby was secured when his parents moved to Lower Hutt.

“My older brother Pio went to St Pats Town. He said there was no way I was going to school with him so my parents sent me to Stream. It was the best decision. I got into a lot of trouble early on until the school gave me an ultimatum, anger management or rugby.”

Paulo played 56 games for the Silverstream First XV and secured a place in the Wellington Rugby Academy. In 2007 his agent suggested he try his luck in Belfast. Paulo had played in Plymouth, England in the summer of 2005. A three month arrangement with Ulster ended up lasting two years.

“Craig Dowd picked me up at the airport and asked,  ‘do you know Chris Middleton?’ Chris was my nemesis at Wellington College and I explained we had history. Craig said ‘you better be better than him because we picked you for him.”

Paulo made 35 appearances in four seasons for North Harbour. Better still he played 26  games of Super Rugby for the Blues.

“I got a phone call from Pat Lam at Christmas time 2009 saying the Blues were short of locks. I trained for two weeks and was asked to stay on. I started the Tui Cup game against the Hurricanes and then Ali Williams came back to play the Chiefs. I thought that was it but Ali ruptured his Achilles in that game and I was in the Blues.

“The Blues was a real eye-opener. Playing alongside legends like Jerome Kaino and Keven Mealamu is an experience I will always treasure. In 2011 I was called into the All Blacks to help them practice lineouts, an extra body at training. Steve Hansen came over and said, ‘the way you’re going you could be an All Black.’ It went to the head. My last season at the Blues wasn’t good.”

Cut from the Blues in 2012, Paulo was thrown an international lifeline when he debuted for Samoa against Canada in Colwyn Bay, Wales. Samoa won the test at the seaside resort 42-12 with Robert Lilomaiava scoring four tries.

In 2015 Paulo got his chance to prove his mettle against the All Blacks. In an historic one-off test in Apia, Samoa almost caused an upset, narrowly losing 25-16.

“Man, that was an awesome week. The whole of Samoa got a big buzz out of it. I remember walking through town during a parade and the All Blacks were beside us on a bus which couldn’t move.

“I’ve played in bigger stadiums but that was the craziest crowd ever. To play the best team in the world at home was a dream. At one stage I saw Richie McCaw on his knees puffing. I thought I must be doing alright.”

“There is the talent to succeed but the way they do things upstairs is very different. The foreign coaches help but Italy is still behind the rest of Europe.”

Stints at London Irish and the Cardiff Blues brought Paulo into contact with the world’s elite.

“I was always sorest after playing South Africans. Victor Matfield was technically the best lock I played. He was always stealing the ball. Bakkies Botha, man he hits hard.”

“I played the World Cup in 2019 which was frustrating. We had the potential to be really good but underachieved. We were under-resourced and one touch of the head was basically a red card.

“Having kids calmed me down. I was ready to come home in 2020 and enjoyed a season with Manawatu.”

Last year Paulo answered an SOS from Samoa, playing against the Maori All Blacks in Wellington.

“That was special and we pushed them. It’s always been a bit frustrating Samoa haven’t shown their potential at the top level. Seilala Mapusua is a good coach and he’s got good people with him like Tom Converty.”

Samoa qualified for the 2023 World Cup in France after two victories against Tonga.

“I’m not a big talker. I like to lead through actions. I’ve been pretty lucky I never got injured. You can’t take anything for granted and take shortcuts, avoiding hard work.”

Scoring one of his two tries on Saturday against Johnsonville: