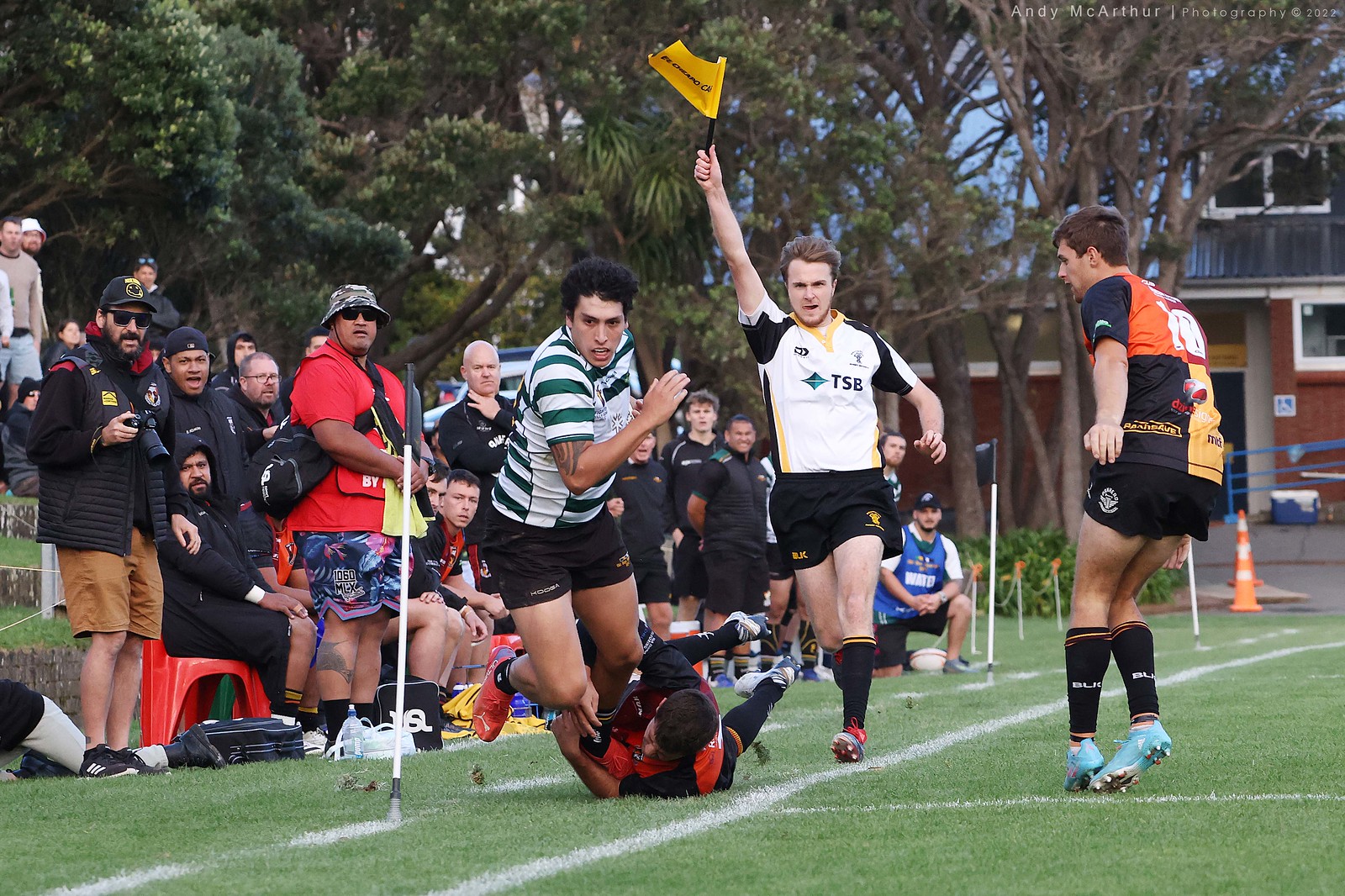 ANZAC DAY – lest we forget.

Evening updates: It is the second week of school holidays, but a few school sides are in action this week.

Naenae College and St Bernard’s College are meeting during the week in a pre-season match, while the St Mary’s College girls team is playing in Porirua on Thursday in a game of three halves pre-season against a local combined team and another school (TBC).

The Reserve and Presidents Grades start up this coming weekend as well, so all club rugby in Wellington will be underway.

Draws for all these grades are expected to be made today.

The New Zealand Rugby Football Union’s AGM is later this week in Wellington.

Nine out of 27 games have been decided by inside a converted try in the first four rounds of the Swindale Shield. At the same stage of the season last year it was six.

Club Rugby understands that Tawa have laid an appeal against the decision relating to their “game not played” against Paremata-Plimmerton two weeks ago when the union accepted that the latter could not field a side due to Covid. Club Rugby further understands that the central argument of Tawa – who voted against the measure – is that the provision to award them three points has denied them of two based on past results.

Though given they lost to HOBM by 29 a week after Pare-Plim lost to the same opposition by just four, that argument seems flat in the current season’s context.

In more Tawa news, it’s believed that Saturday’s match was the last, for now, for Sitiveni Paongo, with the abrasive former Lions front-rower headed across the Tasman.

Also expect the WRFU to make a decision as to the fate of the Wainuiomata Women’s side. The past grade champions have defaulted three of their first four fixtures, which triggers provisions in the union’s bylaws, and played the other under the Game On provisions with only 12 players. If they are removed from the competition, its a further indictment on the state of the women’s game which has already lost two teams (HOBM and OBU) from last year.

The Under 85kg competition looks set to be really competitive this year. Johnsonville had a top win against a building OBU. Defending champions Avalon have lost a lot of experience but were too strong for Hutt Old Boys Marist. Petone has a team, but got thumped by Poneke. Eastbourne remains powerful. The Rams easily accounted for MSP in their match.

A mention for Avalon Wolves flanker Phil Green who ran out on to Fraser Park on Saturday with his mobile phone in his pocket. A quick realisation and he turned around and handed it to a Wolves supporter! A player live streaming or providing live updates out in the middle would be something new for social media.

Wellington Pride assistant coach Aimee Sutorious isn’t hanging up her boots anytime soon? She played openside flanker for Norths on Saturday in their win over the Paremata-Plimmerton Women’s side.

The Hurricanes forwards produced arguably their best shift of the season in their 30-17 victory over the Reds. An awful start saw the Hurricanes slump to a 17-0 deficit before an opportunist try turned momentum with prop Tyrell Lomax (2 tries) and loose forwards Blake Gibson and Ardie Savea leading the charge. Peter Umaga-Jensen and Bailyn Sullivan (2 tries) finally were paired together in midfield and showed their considerable promise with a number of breaks. Hopefully the combination endures.

A big game from TK Howden for the Hurricanes on Saturday. A late call-up at blindside for Reed Prinsep, he made the most of his opportunities. Future All Black?

Is there a possibility for a girls Under-85kg competition or a competition that could be tens and weight restricted at a senior level?

The 2017 St Patrick’s College, Silverstream First XV scored 157 tries in 18 games, with 23 players in the squad scoring at least one try. Lock Aisea Mafileo was the only regular starter not to cross the strip. He scored his second try in 25 games for Hutt Old Boys’ Marist on Saturday in their 43-14 win over Tawa:

Sam Green and Oliver Paotonu have made a noticeable difference to Johnsonville since switching from OBU. Amazing what a more even distribution of talent can do in lifting the fortunes of smaller clubs. Both Green and Paotonu struggled to crack the Goats starting line-up but are quality Premier players.

Why is Alex Fidow languishing on the Ories bench in club rugby? That’s two weekends in a row now.

What has become of Taine Plumtree at the Blues ?

Solid debut for Chicago Doyle at MSP on Saturday, as seen below.

An interesting positional ‘switch’, as we understood he was more of a fullback. Aidan Morgan, Ruben Love and now Chicago Doyle – three young guys in the mix for the Wellington Lions later this season.

Scots College will be happy with Ories’ big win over Wainuiomata on Saturday, with Sione Halalilo getting three tries, and Jonty Bird getting two.

With Academy projects largely sheltered from club rugby these days shouldn’t they instead be sent to clubs short on positions and players? The distribution of those players would be decided independently by the Union or Club Committee on the basis of need. For example, instead of Harry Godfrey playing exclusively for Petone, whom he has no connection with, he will soon be withdrawn from club rugby for the ridiculous Super Rugby Under 20 competition. Could he be shared around the struggling clubs to help them a bit? Obviously, there are some disadvantages with this model, not least with each team’s system and calls and game plan, but players who train all day have a unique advantage to start with.

Cortez Ratima (21) and Xavier Roe (23) are two young halfbacks in the Chiefs playing great footy. They bring out the best in each other with their genuine contest for a starting position. Brad Weber is an All Black and Chiefs centurion but with more game time and room for greater improvement is the Ratima-Roe duo the recipe for more success this season?

Jonah Lowe crossed for four tries in the Chiefs 51-27 win against the Waratahs. Opposite wing Quinn Tupaea dotted down twice. In the same fixture last year the late Sean Wainui scored a record five Super Rugby tries in a game.

Wayne Smith was thrown an absolute hospital pass with his appointment as Black Ferns ‘Director of Rugby.’ A report condemns the culture set by the previous head coach who was somehow retained only to resign following public fallout. Is this a way to treat legends like Smith? Of course he will take on the challenge but quite a leap from advisor to coach!

Covid continues to disrupt the start of and the early rounds of some club competitions across the country.

Some unions such as Taranaki and Counties Manukau had already delayed the start of their seasons and Steelers club rugby gets underway this coming weekend and Taranaki on 7 May.

Southland kicked off last Thursday night, but round two on Saturday saw only of three Premier games go ahead. The Blues side beat Midlands 43-0, but even so they still had seven players out because of Covid.

In Whanganui club rugby, the replay of last year’s final saw Border beat Kaierau 38-22. This extended their winning streak to 16.

Up the line, the second round of the Hawke’s Bay Nash Cup was contested. Four teams have won both their games so far: NOBM, HRS, Napier Tech and Havelock North.

England thrashed Ireland 69-0 in the Women’s Six Nations this morning in front of another record crowd of 15,836 at Welford Road. England scored 11 tries to boost their tally to 41 in four matches for the championship. They will play France to decide the Grand Slam title next weekend. France beat Wales 33-5 and Italy beat Scotland 20-13 in the other match. France have had a habit of easing off in the second-half. They have scored 97 of their 140 points in the first-half. England has scored 98 points in the first-half and 176 in the second. England have won 22 games in a row, passing their best effort of 21 between 1992 and 1997. New Zealand won 24 games in a row from 2001 to 2009.

England’s Emilly Scarratt made her 100th test appearance in her hometown of Leicester as Ireland was trounced 69-0 in the Women’s Six Nations. She debuted as an 18 year old in 2008 and has scored 50 tries for her country and won a World Cup in 2014. Scarratt joins eight other women: Tamara Taylor (Eng), Rochelle Clarke (Eng), Amy Garnet (Eng), Sarah Hunter (Eng), Katy Daley-Mclean (Eng), Donna Kennedy (Scot), Sara Barattin (Italy) and Louise Rickard (Wal) who have achieved this astonishing feat. Fiao’o Fa’amausili with 58 tests in New Zealand’s test record holder.

Club rugby in heaven in round seven