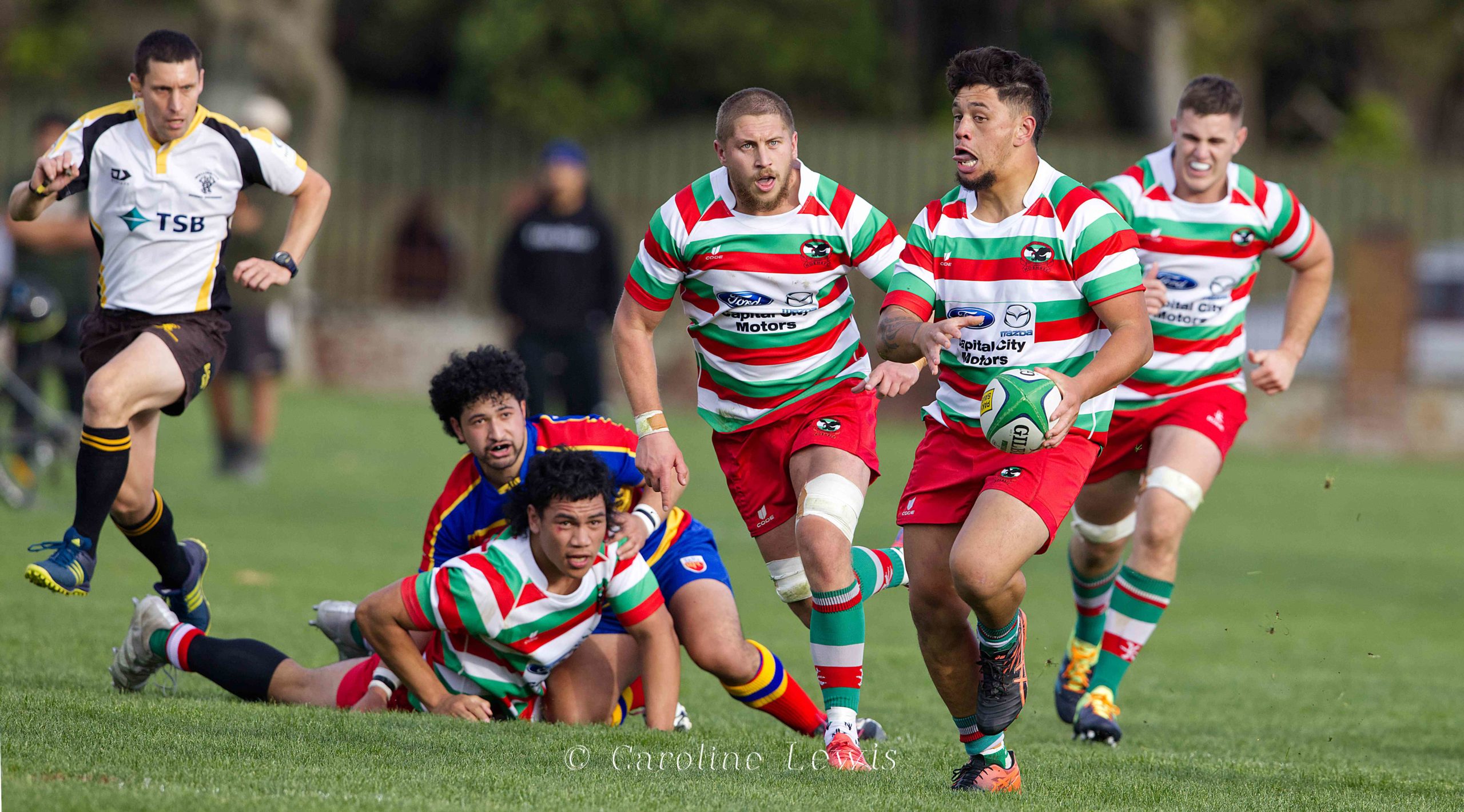 Results & Scoring (individual scorers as and when received) HERE

Saturday evening round-up: A month in, and there are three unbeaten teams in Wellington Premier club rugby.

Hutt Old Boys Marist, Petone and Poneke have all won their first four games of the 2022 season.

The points table doesn’t recognise how their latest wins were achieved today, on another bright, sunny afternoon, but they were won in three differing circumstances.

The HOBM Eagles are out in front on 19 points on the Swindale Shield ladder after a bombastic 43-14 win over defending Jubilee Cup champions Tawa. The Eagles played at home for the first time this season and swooped on Tawa in the second half after absorbing plenty of pressure and leading 10-7 at halftime and then broke the game open with two intercept tries in quick succession in the second spell.

Poneke are on 17, after edging the resurgent Paremata-Plimmerton Hammerheads 23-22 at Kilbirnie Park. Poneke fullback Nick Roberston scored the match-winning try in the 78th minute, after Paremata-Plimmerton had come back from trailing 18-8 early in the second half. Two consecutive converted tries put the visitors up 22-18 heading into the final 10 minutes before Filipino 7s international Robertson scored the winner out wide.

In a similar finish, the Old Boys University Billy Goats, came back late to edge the Upper Hutt Rams 22-17 at Nairnville Park. The Rams were up 17-7 and then 17-12 as the second half unfolded in front of the Lucknow terraces.

OBU rallied and scored 15 points in about 10 minutes, with first five Callum Harkin scoring the last try that won the game. He scored two tries and 17 points, with halfback Kyle Preston scoring their other try.

In town, both Oriental-Rongotai and Marist St Pat’s had comfortable wins.

At the Polo Ground, Ories beat Wainuiomata 56-24, while at Evans Bay Park Marist St Pat’s accounted for the Wellington Axemen 59-0 with nine tries, including two to right wing Hansiene Pama.

Johnsonville reinforced their early season promise with a 50-12 thrashing of Avalon on Old Timers’ Day at Fraser Park.

Around the grounds, Tawa’s return to the scene of last year’s Jubilee Cup triumph came with a very large reality check as they were well-beaten by Hutt Old Boys Marist by almost 30 points.

The opening 40 minutes was an absorbing, even contest. The Eagles had the use of the dying northerly and opened the scoring with a Brandyn Laursen penalty before Tawa barged over from short range. After Tawa pivot Fuku Paongo clanked a close range penalty off the post the Eagles would go in front courtesy of some good work from Jerome Harimate – who wore #22 and started ahead of Albert Polu in midfield – before Laursen missed a long-range penalty to end the half.

Turning only three points down and with the breeze at their backs Tawa would have fancied their odds, but they were snuffed out before 10 minutes had passed, as two HOBM intercepts in three minutes caused irreparable damage with fullback Zane Ainslie going 90m and Harimate 40m.

When Laursen crossed after a fairly ragged passage 10 minutes later the match was largely decided, though Swayde Brightwell scored off a 5m scrum for the visitors to reduce the margin. HOBM had the final say with Fritz Rayasi barging over in the left corner, and a sixth try completed a satisfying win to leave them topping the table.

At Fraser Park, the Hawks’ breakneck pace was a stark contrast to the Wolves’ determined but sometimes ponderous forward orientated approach.

The Hawks leapt to a 12-0 lead with cracking long range tries to centre Aukuso Tuitama and wing Jacob Walmsley.

Avalon lock Teofilo Paulo responded from a maul for the Wolves but the threat of the Johnsonville outside backs loomed large. A break down the left-wing side saw Avalon first-five Thomas Kiwara yellow-carded for a slap-down. Tuitama and Walmsley dotted down again and it was 24-5 at halftime.

When Johnsonville struck within the first five minutes of the second-half a very large score appeared likely. However, Avalon fought hard and Paulo’s second try closed the gap to 31-12.

Much of the second spell was lacklustre but Johnsonville caught fire again in the last ten minutes by scoring three tries. Tuitama scored a deserved a hat-trick, blindside Sam Green was a hive of activity and crossed the chalk. Halfback Mark Sutton flourished with his quick passing and nippy running while second-five Oliver Paotonu has added much steel, speed and flair to the backline.

Wainuiomata drew first blood after 10 minutes when first five Murphy Albright chipped ahead after a lineout in the Ories 22 and centre Nick-aedyn Rahiri followed up to score.

Ories openside Sione Halalilo would score a hat-trick, and he scored the first try for Ories, taking a quick tap penalty at a lineout and running through to the line.

Ories scored next from an attacking scrum, with centre Malachai Unasa strolling through to dot down untouched and Ories led 14-5 with 25 minutes gone. This quickly became 21-5 with hooker Elijah Ti’a scoring after an attacking lineout.

Wainuiomata pulled a try back through hooker Kade Tiatia, but Ories’ response was to score their bonus point try through Unasa, running off right wing Ethan Webster-Nonu.

Despite losing a player to the sin-bin, Ories’ 28-10 halftime score became 35-10 and it was basically game over when Halillo scored his second try, after another attacking lineout and good work by halfback Declan Hay.

Relentless pressure then saw prop Jonty Bird score the next try for the Magpies, before Wianuiomata conceded a yellow card and then Bird scored a crowd pleasing second try by chipping ahead and showing good pace to beat the defenders to the race to the ball.

Openside Halalilo then bagged his hat-trick, to being up Ories’ half century, before Wainnuiomata came back in the final 10 minutes with two consolation converted tries – both scored by right wing Niko Patelesio.

In the fourth round of Women’s club rugby, there was a default, a close result and two one-sided results.

Wainuiomata defaulted to Ories, while Petone edged Avalon 17-12 in the closest result of the day. On Fraser #1, Petone prop Angel Uila scored what would be the match-winner with about 15 minutes to play. Avalon fought hard and earned a bonus point with a late try to Pare Awatere.

Northern United beat Paremata-Plimmerton 71-0 in the battle of the northern clubs, while Marist St Pat’s beat the Poneke Koa 69-0 on Kilbirnie Park.

It was the opening weekend of the Premier 2 competition.

In Division 2 National Mutual Cup contests, Avalon blanked Johnsonville 23-0, Petone beat Stokes Valley in a lively fixture and the Wellington – Wainuiomata match was postponed for reasons unknown at the time of publication. Pare-Plim had the bye.

In the opening round of the U85kg JC Bowl, Johnsonville beat the OBU Scallywags 27-14 after being ahead 22-7 at halftime, the Upper Hutt Rams took down MSP 63-0, Stokes Valley beat Wellington 19-3, Poneke defeated Petone 52-0, Avalon beat the HOBM Howlers and defending champions Eastbourne met Wests.

There were also some pre-season Colts matches played today – such as Avalon versus Paremata-Plimmerton – their competition starts next weekend.