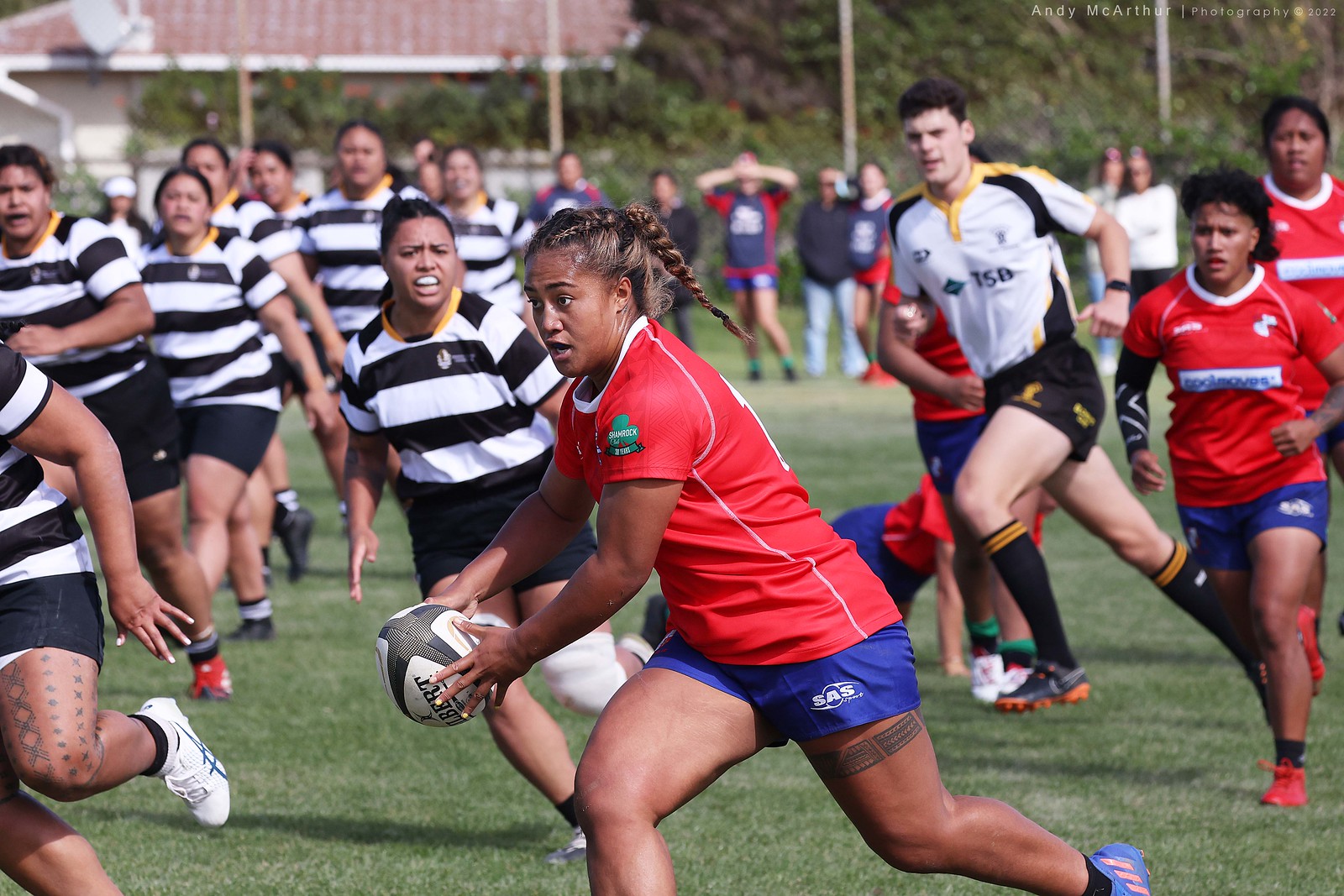 Ories and Norths. Norths and Ories. Th names of the two clubs have a familiar ring when discussing who will be win the Wellington club rugby women’s title each year.

Together those two clubs have won eight of the past 10 championships (Wainuiomata winning in 2012 and 2016).

Marist St Pat’s have already shown in two matches that they are a genuine threat to these two this year, with an exciting backline headed by Black Ferns centre Monica Tagoai.

Tagoai has been with the MSP side for several seasons. She was playing club rugby for MSP (7s) and Hutt Old Boys Marist (15s) in her last year of school at St Mary’s College in 2016, the year they won the Condor 7s and were runners-up to Southland Girls’ High School in the Top 4 national final.

“Club rugby is about playing for your family and alongside girls you might never get to play with in the future,” said Tagoai. “Sometimes the score doesn’t matter but making sure the girls take something out of every game is vital.”

It was nevertheless a pleasing scoreline in the first match of the Rebecca Liua’ana Trophy on 2 April, as MSP overcame 15-time champions Norths 41-5. It was the first ever victory for MSP over the Porirua powerhouse.

Notably, Wellington Pride outside backs Thamsyn Newton and Georgia Daals scored five tries between them. Both girls have joined from the now dormant Old Boys University Impalas. Daals played 39 games for OBU from 2014 to 2017 scoring 465 points, including 51 tries. Newton (also a Wellington cricket rep) scored 155 points and 25 tries from 2019 and 2020.

“I know Georgia well and she was going to go to Oriental Rongotai (Ories), but I was like “they’ve already got heaps of good players, come to MSP.’ She took a bit of convincing but man she adds so many skills, fire and energy to the backline,” Tagoai acclaimed.

Ories are the current Wellington Champions. In 2021 they beat MSP 89-15. In round two the two clubs locked horns in a thriller with Ories narrowly winning 27-17, breaking a 17-17 stalemate in the last quarter. Tagoai scored a try and believes MSP gained massively from the experience.

“We gained a lot of confidence from the Norths’ game and were out to prove people wrong against Ories after the big score last year. We’ve had a good culture for a while, building experience with the same players returning.

Tagoai is one of the most damaging midfield backs in New Zealand rugby. A Black Fern before her 21st birthday, she has the brains to complement her brawn.

Rampant for the Hurricanes Poua in the inaugural Super Rugby Aupiki, Tagoai recently completed a Master’s degree in intercultural communication at Victoria University.

In 2019 she broke her tibia and fibula, an injury that sidelined her for nine agonising months.  How was Tagoai able to maintain an academic and athletic edge?

“Be yourself. I like winning. Hard work is better than excuses. I try to express myself on and off the field,” she responded.

The Hurricanes Poua dominated possession and territory against a better prepared opponent.  Tagoai broke the line often and in the second-half the Chiefs Manawa were reduced to 13 players for 20 minutes, but curiously still won by 29-8.

“The team was stuck in camps and isolation for so long we were so hungry to play.  It was a privilege to represent our community and play with girls from Manawatū, Taranaki, all together.

“That Manawa loss hurt. When we played Matatū we worked hard to be smarter and more patient. We had to dig deep but when we got the ball to Ayesha (Leti-I’iga) that was a great feeling. Once she gets past the first defender nobody is going to stop her.”

Ayesha Leti-I’iga scored both tries in the Hurricanes’ 18-6 win over the Southerners. Two weeks ago Tagoai joined her best friend at the Black Ferns camp in Christchurch. The first of several camps preparing for the World Cup defence in October was highlighted by the presence of two-time All Blacks World Cup winning coach Wayne Smith.

“Camp was so fun. I learned so many new things and have set some new goals to improve my game.  It was great to come up against the best players in New Zealand and test myself.

“I learned techniques for passing better under pressure. How to better estimate where the defender is better and how to move my body to make the movements more comfortable. Smithy really breaks things down. It’s amazing.”

Tagoai earned three caps for the Black Ferns in 2018 just two years after leaving St Mary’s. In 2016 St Mary’s were National sevens and a year later fifteens champions with All Black captain Ardie Savea a member of the coaching staff.

She had a breakout Farah Palmer Cup in 2018, scoring two tries in the shock 43-38 win over eventual Premiership champions Canterbury. She bagged another brace in the 57-5 mauling of Otago in the Championship final.

She debuted for the Black Ferns off the bench against the USA in the historic Soldier Field test in Chicago. She added further appearances to her resume when she appeared in two tests on the French tour.

Following their big win over Norths and close defeat to Ories, MSP were defaulted to by Wainuiomata last weekend.

This coming weekend they are scheduled to be playing close neighbours Poneke at Kilbirnie Park, kick-off 11.30am.

MSP after their recent 41-5 win over Norths: