Skip to content
You are here
Home > Club Rugby > Pioneers of rugby in Wellington: 009 William Hardcastle 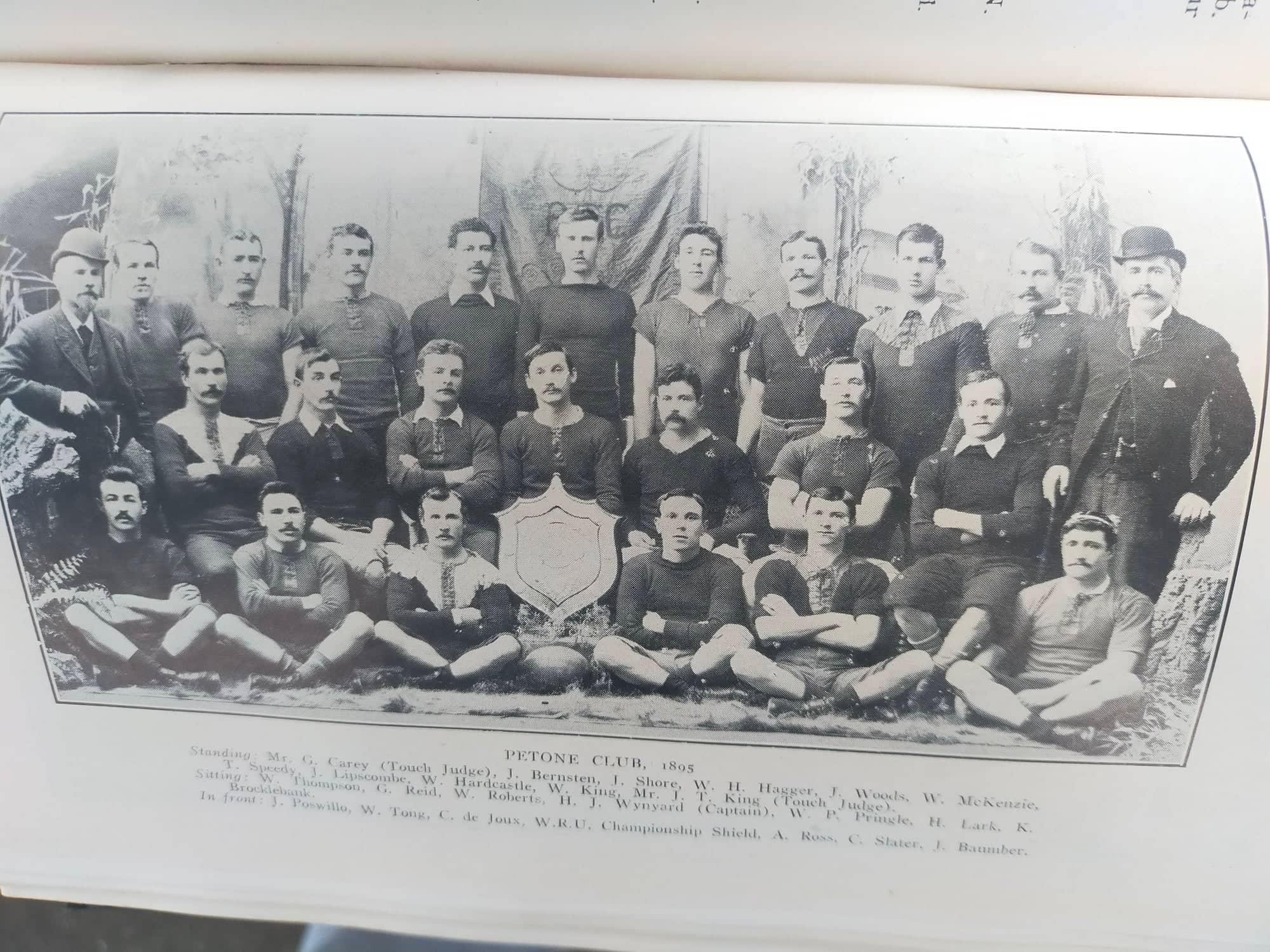 The champion Petone team of 1895. William Hardcastle standing at top, third from right. William ‘Offside Mac’ McKenzie, the subject of our previous profile in this series (see link below), is dead centre at the top with the flag behind him.

While Thorn had already forged out a successful career in rugby league playing for the Brisbane Broncos before his shift back to New Zealand and to the Crusaders and All Blacks, Hardcastle did the opposite approximately 100 years earlier.

Both appear to have been similar players, tough as teak, reliable and dependable and always up for the challenge.

Educated at Petone, Hardcastle started his career at Petone, part of the side in 1895 that won the Wellington Senior Championship for the first time.

The following season he switched to Melrose and helped them win the first two of their three consecutive title in 1896, 1897 and 1898.

He first played for the Wellington representative side in 1895 and scored a try in Wellington’s gritty 9-5 win over Auckland, finishing off a dribbling movement by the Wellington forwards up to and over the Auckland line.

Athletic Park was opened at the start of the next year and it is likely that he would have been part of Melrose’s 7-3 win over Christchurch visitors Sydenham on opening day on 6 April 1896.

That same year, the touring Queenslanders arrived. Hardcastle was a try-scorer in Wellington’s 49-7 thrashing of them on 12 August, but was not in the All Blacks team that edged them 9-0 in the test just a few days later.

Now in his early 20s, Hardcastle was displaying his hard-nosed qualities as a dependable forward, and in June 1897 played for the North Island in a 16-3 win over the South in their annual match. From there he was selected for the New Zealand team to tour Australia.

He played in seven of the 11 matches, including the first two “tests” against New South Wales. His only try was in the match against Central-Western Districts at Orange.

Hardcastle must have enjoyed Australia and was also restless and searching new opportunities.

So in 1898 he departed New Zealand and embarked on the second stage of his career, which was playing rugby union in Australia.

He joined the Glebe club in Sydney and immediately helped his new club to win the ingaurgal Sydney club competition. He also scored a try in NSW’s 13-5 win over Queensland in his first year over there.

He was subsequently selected at flanker to play the fourth test against the ingaurgal British side to tour Australia in 1899. The tourists won this match 13-0.

Fast forward to 1903 and he was again picked to play for Australia – this time against New Zealand in the first official rugby union international between the two countries. He played flanker and marked Dave Gallaher in the match in Sydney that New Zealand won 22-3.

He continued playing for Glebe and New South Wales, whilst presumably living in and working in Sydney until 1907 or 1908. It is at this point that Brad Thorn comparisons are made, because about now at the age of about 33 he started the third stage of his career.

This was joining the new rugby league code in Sydney, that had been introduced by a team of New Zealanders led by Albert Baskerville of Wellington’s Oriental rugby club and that also included several Petone rugby players, whom Hardcastle may have known or known their families from his youth as he was several years older than most.

Hardcastle turned up in the Ipswich club in Queensland and was selected in the second test of 1908 against New Zealand. He also played the third test a week later and went on to tour with the pioneering 1908 Kangaroos to Britain.

Returning to Australia, he continued playing rugby league in Sydney for the Glebe team at least another two seasons, before hanging up his boots well into his mid-30s.

Like many of his peers, in 1916 he went to war, aged 42. He was a machine gunner and private in the the third Australian infantry battalion. He survived the war and died in Randwick, Sydney on 11 July 1944 aged 69.

Previous story in this series: