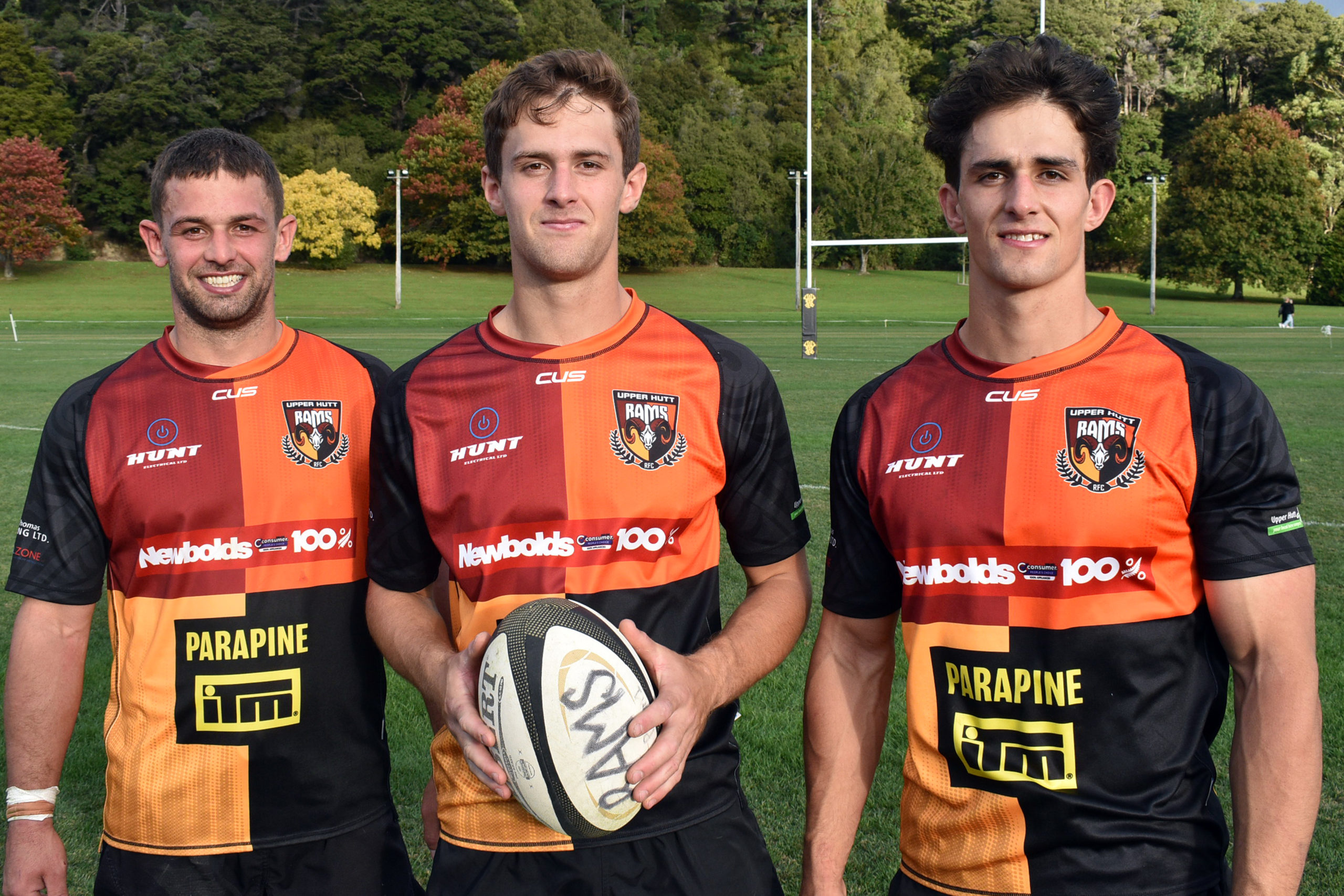 The three Svenson brothers that lined up at 10, 11 and 12 for the Upper Hutt Rams in their 23-16 win over Marist St Pat’s on Saturday, from left to right: Josh, Scott and Todd. PHOTO: Peter McDonald.

Monday afternoon edition: Three weeks down and 10 to go in this year’s Premier Swindale Shield competition.  Saturday’s results have added much interest and intrigue to the competition, which is what we want for as many rounds as possible.

This coming weekend’s games at a glance (home teams first):

This weekend also sees the start of the Men’s Premier 2 and U85kg competitions. No draws yet, so look out for these soon.

It is school holidays for the next two weeks, but if we hear of any First XV fixtures in the next fortnight we will look to promote these or cover them if we can. One match that was played today:

From the St Pat’s Town Facebook page: The Xavier Reidy Cup is changing hands after the MSP Colts beat our 1st XV 26-12 at Evans Bay Park today. The match befitted the occasion, being played in great spirit, with both sides ripping into their work and scoring some fine tries.Our lineout functioned well, the scrum held its own and as always Francis Mettrick was threatening at fullback. We had half a dozen players away at a rugby league tournament so it presented opportunities to others. Hooker Troy Gray was one of those given a start – and he caught the eye with a busy game. Next up for the 1st XV is the Traditional against St Bede’s in Christchurch in the middle of next week.

This coming weekend is the Super Rugby ‘Super Round’ in Melbourne. The Hurricanes are playing the Reds late on Saturday night. The Reds are running hot, having won seven from eight and toppling the Rebels 36-32 this past weekend.

Argentina beat Fiji 29-10 in the Vancouver Sevens final to win their first title in 109 tournaments since 2009. The Pumas won bronze at the Olympics and have been resurgent under coach Saintago Gomez Cora. Marcos Moneta scored two tries. The 22-year old is an absoulte flyer and one to watch in the future.

How windy was Saturday’s rugby? A couple of grounds were a wind tunnel on Saturday, contributing to the close results.

Lock Hemi Fermanis was Tawa’s Player of the Day on Saturday, scoring two second half tries. A great way for him to celebrate his 100th blazer game, which he received at the clubrooms afterwards (playing his 100th away against MSP a fortnight earlier).

Bentley’s current feats are Ayesha Leti-L’iga-esque. of note Ayesha scored two tries for Ories against Avalon on Saturday, moving her career tally for Ories to 162 tries in 64 matches played.

Poneke beat Norths 16-14 to win the Cyril Collett Memorial Shield for the first time since 2018. Collett played for Porirua in the 1950s. His great grandson, Luke Kapene was fullback for Norths on Saturday.

In the same match, Jermaine Collins was playing halfback for Norths. He the nephew of the late Jerry Collins.

Congratulations to Jack Ross for playing his 100th match for the Petone Premiers on Saturday, in their late win over Oriental-Rongotai, and for wing Ben Brooking for reaching 50 games for the side.

Congratulations to Isadora Leio-Laupola for playing her 50th match for Norths against Poneke on Thursday night. Just under five years exactly since she made her club rugby debut for Norths in 2017.

Johnsonville wing three-quarter Knox Tuinasau and Petone’s Riley Higgins are the top try scorers in the men’s competition so far with four tries each in three Swindale Shield matches.

Welcome back Max Pearson to the Upper Hutt Rams, filling the #20 spot on their bench. Pearson played seven seasons for Upper Hutt/UHR between 2011-2017 before hanging up his boots. So five years between matches. He is a former Wellington 7s and, briefly, a New Zealand 7s representative as well.

Josh Svenson (picture above) earned his 30th Blazer game in the win over MSP. He’s had at least two shoulder reconstructions.

Defending champions Taradale got off a flying start in Hawke’s Bay Premier club rugby on Good Friday, beating newcomers Aotea 70-20. Hurricanes U20 loose forward Tino Savea (no relation?) scored 4 tries for Taradale. He was Lindisfarne College’s captain last year, and another loosie to watch out for. Kienan Higgins was a try-scorer for Taradale as well. Sheridan Rangihuna, with two penalties and two conversions, helped Napier Tech edge MAC 30-28

The Blues beat the Crusaders in Christchurch for the first time since 2004. Dalton Papalii, with 21 tackles, no misses and a storming try was possibly man of the match in a high quality contest where the Blues at last showed the mettle required to knock over the best. Young Crusaders lock Zack Gallagher looks set for a big future.

Chiefs centre Alex Nankivell and Blues hooker Kurt Eklund are two players whose star is rising. Consistent form and injury to Anton Lienert-Brown must nudge Nankivell somewhere into the cluttered All Blacks midfield conversation. Has Ekluad emerged as a possible third-choice hooker with Dane Coles injured and Asafo Aumua in inconsistent form?

When comfortably ahead and enjoying a wealth of possession Jordie Barrett decided to take a cocky dropped goal attempt from halfway that missed by a mile. It was an incident that suggested the Hurricanes‘ heads weren’t in the game. In the first-half and ahead 14-6 with a one man advantage following a Josh Dickson red card the Hurricanes had chances and should have put the Highlanders away. Their inability to do so inevitably resulted in a Highlanders resurgence. Credit to Salesi Rayasi and Aidan Morgan who combined to finish an outstanding try from a lineout.

Hugh Renton and Gareth Evans could finally be split apart after Evans emerged from a ruck with a nasty black eye? How that happened will surely be a source of further investigation this week?.

First it was Ardie Savea now Aaron Smith has spoken out about his frustration around officiating in Super Rugby. Sour grapes or do two senior All Blacks have a point?

If Smith and Savea are found to be totally incorrect with their judgments should they referee a game of junior rugby as a penalty?

If Smith and Savea are so concerned by the quality of the referring, why don’t they use their platforms and profile to assist a recruitment drive?

Kane Hames, a referee himself, was an excellent and necessary voice of reason in the controversial end to the Hurricanes v Highlanders game. Why are there not more referees used in broadcasts?

Why do New Zealand Rugby Referees never face questions publicly about their performance? Wouldn’t it help to have representatives from New Zealand Rugby referees explain complex, contentious calls for the purposes of clarity. As fans we invest a lot of time, money and energy into the game. There seems to be an ‘us v them’ complex between the players/spectators and referees which is surely unhealthy.

Ahead of the NZRU AGM on 28 April, and also just because were interested to see  the latest financial statistics on American sports franchises:

The Black Ferns Cultural and Environmental review findings left more questions than answers and ultimately ended in the resignation of coach Glenn Moore. Just some questions following the report and events of the past week:

Who is the Black Ferns coach?

Why are the scores of the tests on tour not published in the report?

Why are there not more women involved in the coaching and management of the Black Ferns? Vicky Dombroski in 1994 remains the only woman to have coached New Zealand. Why not utilise past Black Ferns or seek cultural advice from women like Dame Noeline Taurua or Dame Valerie Adams?

Stuff in an article, Inside the implosion of the Black Ferns said the report “exposed chronic under-resourcing and neglect of the women’s fifteens programme.” The 2021 Black Ferns were the most well-resourced Black Ferns tourists in history and achieved the worst results by any New Zealand rugby team aboard. Even the 1949 All Blacks were more competitive. Why with greater resources are results getting worse?

What other New Zealand women’s sports team has ever left the country with a mental skills coach that so spectacularly failed to do their job?

How does this incident affect the credibility of women’s rugby? Will it harm immediate sponsorship opportunties, playing numbers and fan engagement?

Will Glenn Moore ever coach again?

Why did Glenn Moore not resign after the tour, given the results?

Why was Glenn Moore not sacked after the report exposed his shortcomings on Monday and spared further public embarrassment?

Why was Moore or Black Ferns captain Les Elder never questioned publicly over the incident?

What did Moore contribute at the recent camp?

Will Te Kura Ngata-Aerengamate ever be a Black Fern again?

The report noted that there is no clear or consistent high performance vision; and there are major “capability gaps” within team management due in large part to a historic lack of robust recruitment, training and support. In the first three rounds (12 games) of the the Rebecca Liua’ana Trophy in Wellington there have been four defaults and five games decided by more than 30 points. Many other competitions are struggling for numbers and competitive games and have been for some time. How do you reconcile “robust recruiting pathways” with competitions that are non-competitive?

New Zealand doesn’t have the money and resources England and France enjoy? What else can be done other than throwing money at the problem to strengthen high performance?

There were shades of the old Julian Savea in Dunedin last night as the Hurricanes winger bulldozed his way through the Highlanders on multiple occasions which has sparked talk of an All Black recall. Newshub reporter Patrick Gower claimed that Savea was ‘surely in line’ for an All Black recall following his performance against the Highlanders, which was a sentiment shared by many fans. Read more HERE

New Zealand Rugby has decided to delay the vote on the approval of the lucrative but controversial Silver Lake deal. New Zealand Rugby had originally planned for the deal with the US equity firm to be ratified at their Annual General Meeting at the end of the month. NZR Chief Executive Mark Robinson said it had been decided not to include the motion at the AGM after a request for more information from its Provincial Unions. Robinson said the unions had asked for more time to discuss some key areas of the overall deal structure. Read more HERE

Plenty of interest in second round match-ups