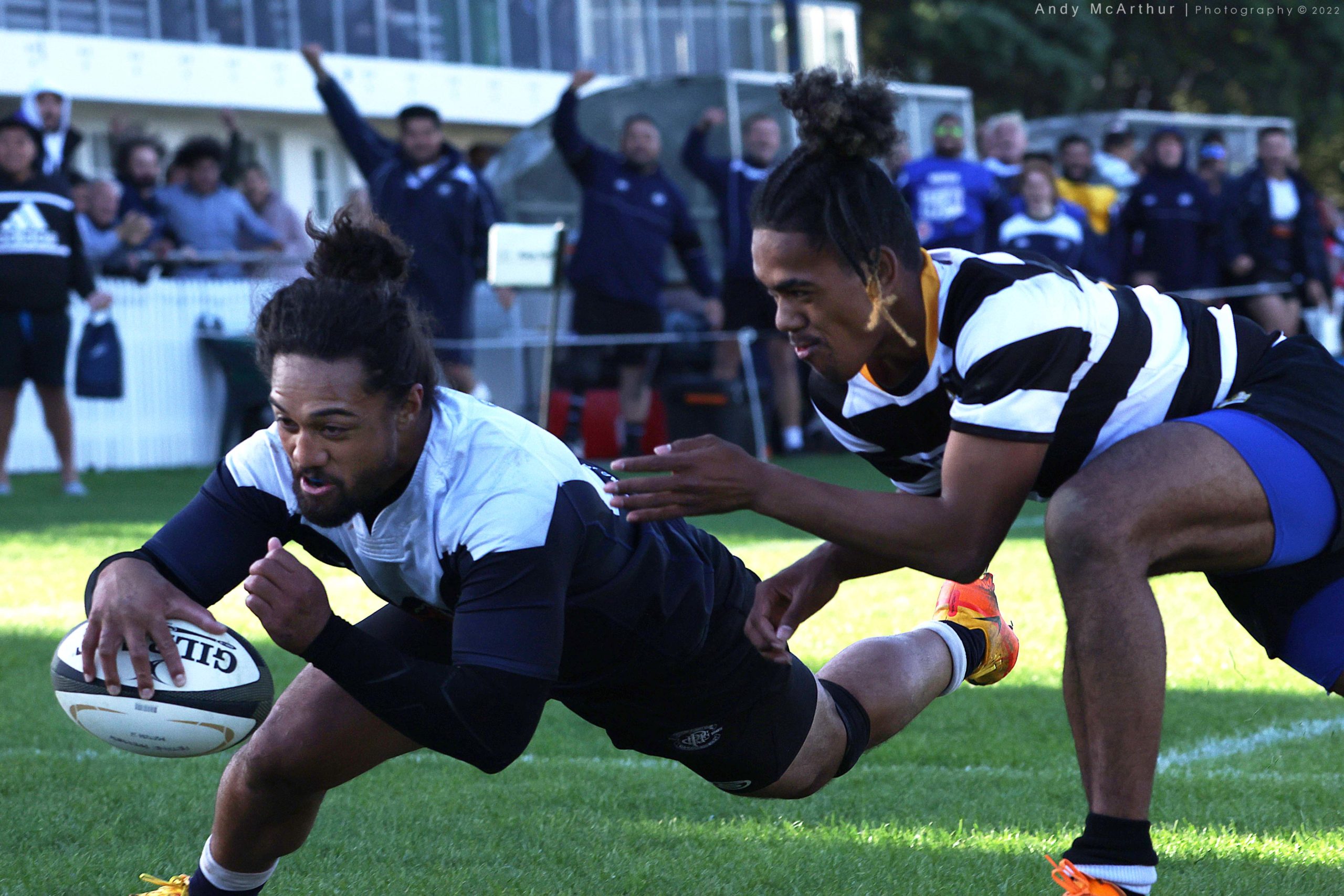 Updated Sunday morning (with some additional scoring details): The 2022 Swindale Shield has ignited.

The third round of matches played in fine, windy conditions today resulted in five of the six matches going down to the wire, with at least one upset and others where the favoured team was pushed all the way.

The match that could be deemed an upset was that at Maidstone Park between the Upper Hutt Rams and Marist St Pat’s.

The Rams had beaten MSP just once in some 30 matches over the past two decades before hosting them today at the temporarily realigned Maidstone Park.

Their forwards threw plenty at MSP and they went into halftime holding a 14-3 lead. Turning into the wind, they extended this lead to 17-3. This was followed by a Rams yellow card and MSP intercept try and then a penalty that closed the game to 17-16 and the match was on tenterhooks. But the home side held them off and kicked two further penalties to give them a 23-16 win.

At Porirua Park, Poneke also put in a determined second half effort to hold out Northern United throughout the entire second 40 and hold on and win 16-14.

Playing with the strong blustery wind, Poneke had kicked three penalties through fullback Pakai Turia and been awarded a penalty try late in the spell to lead 16-0 at halftime. Norths also lost fullback Luke Kapene to the sin-bin during the awarding of this penalty try.

Restored to 15, Norths hit back in the second half with converted tries in the 53rd and 63rd minutes, to cut Poneke’s lead to just two points.

Over the final 10 minutes Norths had their chances to win, including a near-try, a dropped goal that just shaved the outside of the poles by Dale Sabbagh and then a Sabbagh penalty at the end that was pulled wide. Poneke won 16-14 and won back the Cyril Collet Shield for the first time since 2018.

At the Petone Rec, the home side won a Jim Brown Memorial Trophy thriller over Oriental-Rongotai 37-35.

Down to 14 players having lost captain and flanker Jacob Gooch to the sin-bin in the midst of a ferocious Ories assault at their line and having then conceded a try with only a couple of minutes left to Gooch’s Ories opposite, Sione Halalilo, Petone were staring down the barrel of a 32-25 defeat.

But Ories knocked on from the next re-start, giving the Villagers the one last chance they needed. They laid down a scrum just inside the Ories 22 and fed the backs. Second five Riley Higgins hurled a one-handed pass out to right wing Ben Brooking coming off his wing and into the backline, who in turn passed out wide to the next man who was centre Lester Maulolo and he scored the winner.

Earlier, Ories had led 25-14 with a try themselves on the stroke of halftime, and turned into the gusty wind to defend in the second half. Ories led 30-25 before Petone took the lead for the first time at 32-30, prior to what the Magpies thought would be Halalilo’s winning try. Also for Ories, No. 8 Siaosi Lavea scored a hat-trick. Ories missed 12 points off the kicking tee, but all their tries were scored out wide in the ferocious wind.

At Ngatitoa Domain, visitors the HOBM Eagles were pushed all the way in their 26-22 win over Paremata-Plimmerton.

HOBM had first use of a stiff wind but also met a resolute Paremata-Plimmerton pack, recently risen from their Covid cots.

The Eagles opened the scoring after 15 minutes with a try to openside flanker Freddie Sunia after a scything break by first five Brandyn Laursen.

The Hammerheads lost an outside defender to the sin-bin but held out the attacking Eagles. But they couldn’t deny them from a subsequent attacking raid, No. 8 Heremoni Nepo scoring from a scrum and putting them up 14-0.

Five minutes before halftime, the Hammerheads scored their first try out wide, converted from the sideline by flyhalf Zane Edwards.

But the Eagles scored again right on halftime, putting down another attacking scrum and hooker Willie Rua crossing to make it 21-7 at halftime.

Turning into the wind, would this be enough?

Ten minutes into the second spell, they were tested again when the Pare-Plim forwards attacked their own clubrooms corner of the ground and lock James Corcoran came with the try that closed the gap to 21-12.

Once more, the Eagles crossed for the next score, soon after the re-start, with Laursen scoring an individual try. This made it 26-12 with 25 minutes still to play.

The game remained tight for the next 10 mnutes, before yellow cards against both Paremata-Plimmerton and HOBM reduced both sides to 14 players.

The Hammerheads were next to score, through Corcoran, his second of the match, to cut HOBM’s lead to 26-17 with about five minutes to play.

They scored again, running 60 metres, to make it 26-22 in the shadows of fulltime.

At Lyndhurst Park, only some very late scoring took the game away from visitors Johnsonville, as Tawa won 33-22.

Johnsonville had made a lightning start to the match, centre Aukuso Tuitama scoring early and halfback Mark Sutton converting to put them up 7-0.

Tawa replied with a converted try in the 29th minute, but four minutes later the Hawks swooped again to score their second seven-pointer. This time it was right wing Knox Tuinasu, with Sutton slotting the conversion to put them up 14-7.

A minute later, Sutton kicked a penalty and the Hawks went up 17-7, the halftime score.

Coveting their Carman Cup inter-club trophy defence, Tawa scored tries in the 50th and 63nd minutes – to lock Hemi Fermanis and flanker Weston Sao – to move ahead 19-17. Tawa added another try five minutes before fulltime, a second to Fermanis, to take a 26-17 lead.

Johnsonville remained in the fight and they scored another try out wide through centre Tuitama, his second of the match. This closed the score to 26-22 as both sides through everything into the dying embers.

It was Tawa that came out with the last try of the contest, to debutant fullback Mofate Siupolo, also taking a second bonus point away from the Hawks.

Meanwhile at William Jones Park, home side Wainuiomata had a comparatively comfortable victory over the Wellington Axemen, winning 36-10. Wainuiomata effectively shut the Axemen out of the contest in the opening 25 minutes by scoring three tries, leaping to a 17-3 lead – whilst playing into the wind.

All three tries involved left wing, Niko Patelesio who scored two of them, and bustling lock Eti Moananu who scored one and was involved in the other two.

The first try was scored 65 seconds after the opening kick-off when Wainui showed positive intent by running the ball.

The Axemen got on the board with a penalty, but Moananu finished the second try after an attacking scrum penalty and quick tap by captain and No 8 Teru Time.

Another sweeping movement led to Moananu handing off to Patelesio for his double.

The remainder of the first half was a scrappy affair, the visitors trying hard to get themselves into the match, but aside from their lineout, they made numerous mistakes.

The second half started as a continuation of the end of the first, until Wainuiomata brought on some old heads off the bench, including veteran flanker Greg Lealofi and experienced midfielder Tyler Tane. Both these players combined for Wainuiomata’s next try which extended their lead to 22-3.

Lealofi himself scored their fifth try to make it 29-3 with about 15 minutes to play.

Wainuiomata then lost both their captain Time and Tane to injuries, later to be followed by Lealofi’s brother and replacement hooker Dion who was handed a red card after an unnecessary scuffle.

The Axemen finally strung together some good rugby when their fullback Daniel Tafili made a break but was pulled down short. They were given a scrum, they spun it wide, Tafili scored in the corner and first five Matt Day converted from the sideline to make it 29-10.

Wellington pressed hard again but 14-man Wainui turned the ball over and went 90 metres to score their final try through another experienced substitute, wing Jason Love.

Both saw the winning sides hold their opposites scoreless.

At Ngatitoa Domain, visitors the Petone Ponies cruised to a 74-0 win over Paremata-Plimmerton.

In a school match on Friday, the visiting Feilding High School First XV accounted for the St Pat’s Silverstream First XV 26-14 in a pre-season game of four quarters.