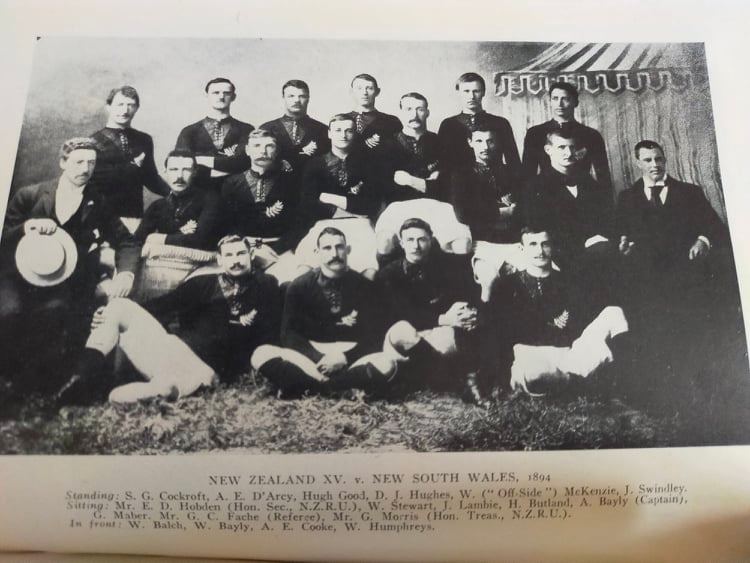 Above: The New Zealand team that played New South Wales in 1894. William ‘Offside McKenzie’ is second from right at top.

William McKenzie was better known by his nickname “Offside Mac”.

A conspicuous moniker, considering McKenzie was an early exponent of the wing forward position that was credited as being devised by Tom Ellison, the subject of our previous profile.  Offside Mac further developed the new rover position, which didn’t take long to became contentious in many quarters as it was basically a blocking role for the inside backs when his own team was on attack.

He was also part of a famous rugby playing family of his era and into the early decades of the twentieth century. He was the eldest of five sons. He played for New Zealand at home against New South Wales 1894 and Queensland 1896. He toured Australia once more in 1897, again appearing in nine of the eleven tour matches.

Born in Greytown, Offside Mac first played for the Wairarapa. He made his debut for Wairarapa aged 18 in 1889.

He was selected for the first official New Zealand side which toured Australia in 1893 and played in nine of the 11 matches.

Ordered off in the last match of the tour, he created a little niche for himself in rugby folk lore by leaving the field with an affected limp, to sympathetic applause from the spectators.

He joined the Petone club in Wellington and Petone and was involved in Petone’s first Wellington Senior Championship win in 1899. Petone would later win a four-peat between 1904-1907.

Bob Luxford, in his All Blacks A-Z profile, wrote that one commentator said of him: “as “inclined to be a little hotheaded and rash when aglow with the spirit of battle.”

This ties in with another story about the Otago – Wellington fixture on 11 September 1897 as told by Tony Williams in his book 100 Great Moments in New Zealand Rugby, in which Offisde Mac was a central figure in.

Their match almost a year to the day earlier, on 12 September 1896 at the just opened Athletic Park, had been a torrid affair that ended in a 0-0 draw and this return fixture was no less niggly. Offside Mac was Wellington’s captain for the 1897 game.

Otago’s backs cut through to score the first try. Williams picks up the story:

“Seeing the Otago backs start to cut loose, Offside Mac immediately ordered his forwards to tighten up the game. They took him at his word and turned the tussle into trench warfare, thundering up the middle of the ruck, knocking aside any and all obstacles to the ball. The forward rushes and the fierce tackling had three Otago players limping or carried from the field.

“During the onslaught Wellington scored a try which was greeted by ‘almost perfect silence’ from the home crowd But they did not remain quiet for long as the action on the field got even more heated. It was Offside Mac who attracted most of their ire. He virtually shut the eye of Otago’s Tommy Wood with a knee to the head and after a collision with Offside Mac, Otago captain Jimmy Duncan came out of it with his face looking the worse for wear.”

Wellington won the match 10-6 but beat a hasty retreat.

“A hostile demonstration was made towards the Northerners on leaving the ground. They were subjected to much hooting and epithets of ‘Wellington Butchers’ were hurled against them. The Otagoites did not relish the vigorous play of the Black Forwards.”

As it transpired, Offside Mac’s career was cut short by his ailing body. He suffered from rheumatism, and a charity match was played in 1901 to send him to Rotorua for treatment. He served as Wairarapa selector in 1902, 03 and later moved to Australia for health reasons. He died in Melbourne on 1 July 1943, aged 72.

Of Offside Mac’s family, brothers Ted and Bert were test referees and Jack represented Wairarapa between 1899-1903.

The fifth brother was the most famous and influential. This was Norman McKenzie, who spent three decades between 1916-46 as Hawke’s Bay’s sole selector. This spanned their famous Ranfurly Shield tenure between 1922-27. Norman and Ted were All Black selectors and members of the NZRFU.