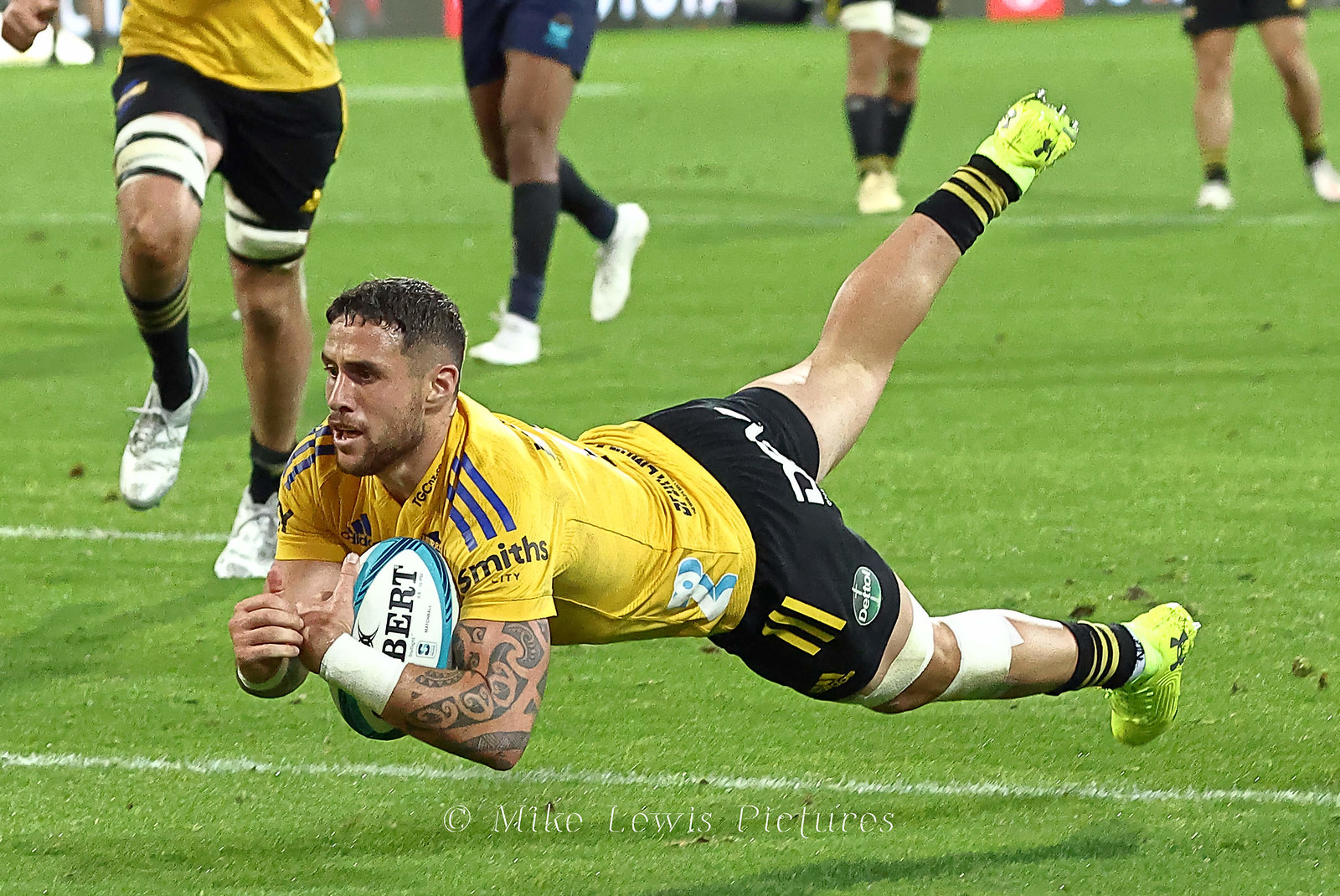 TJ Perenara crosses for his try on Tuesday night against Moana Pasifika. Two things about this try were that it was the Hurricanes’ 10,000th point in Super Rugby and it was his 58th try, just two short of the all-time Super Rugby record of 60 which is held by the former Waratah Israel Folau.

The Hurricanes played two matches in the space of three days earlier this week. A bumper edition of facts and figures from both of these contents combined below.

This match was originally due to be played during Round 4 on 12 March but was postponed because several Hurricanes players tested positive with COVID-19.

This win brought to an end three successive losses for the Hurricanes and reversed the earlier result between the two sides in Round 6, when Moana Pasifika recorded their first-ever Super Rugby victory by beating the Hurricanes 24-19 in Golden Point extra time.

During this match the Hurricanes became just the second franchise to bring up 10,000 points in Super Rugby.

The Hurricanes also brought up 4000 points in their 137 matches played at Westpac/Sky Stadium with the total now at 4,037 points.

The 53 points scored against Moana Pasifika is the first time the Hurricanes have recorded this score in a Super Rugby match. The only possible totals they have yet to score which are less than 53 are five, 48, 51 and 52.

The Hurricanes have scored 50 or more points in a match on 18 occasions but the Highlanders are the onlyNew Zealand side which they have scored that amount of points against (twice).

The Hurricanes have now achieved a winning margin of 41 points on two occasions but in the first instance they were a bit more dominant. At Wellington in the 2016 Quarterfinal they beat the Sharks 41-0.

There were three debutants in this match taking the tally after seven outings to 17: a total of 45 different players have now made an appearance this year for the Hurricanes. This number of debutants in a year has only been exceeded twice before: in the first year of competition (1996) 30 players were used and in 1999, 18 made their first appearance. There were also 17 in 2018.

The 45 players used to date is also a new record beating the 41 who appeared during 2019, when a total of 18 matches were played.
Referee Daniel Waenga was in charge of his first match which involved the Hurricanes.

The Hurricanes created another new record by making 14 changes to the starting line-up from the previous match against the Crusaders. Wes Goosen was the only player to start in both matches.

Kianu Kereru-Symes made his debut in the starting line-up and became the 27th different player to score a try for the Hurricanes in his first match. He is the fourth player in 2022 to do so after Bailyn Sullivan, Logan Henry and Josh Moorby, and this is the first time this many have achieved this in the same year.

Previously there had been three in both 1996 and 1997. Kereru-Symes is also the third Hooker to score on debut: Joe Ward was the first, against the Crusaders at Christchurch in 2003, and second was Dane Colesagainst the Waratahs at Wellington in 2009.

Kereru-Symes is the 18th different player to start a match at Hooker and the third new one this year after Siua Maile and James O’Reilly.

There has never been this many in the same year before although there were two in six separate years beforehand. It is interesting to note in the first 34 matches played by the Hurricanes (from 1996) just one player started at Hooker in all of them and then started in 30 of the next 33 matches as well. That player was Norm Hewitt.

Kereru-Symes, along with Alex Fidow and Tevita Mafileo, made up the fourth different starting front row combination this year.

Both Bruce Kauika-Peterson and Jared Proffit made their Hurricanes debut, off the bench.

It was Mafileo’s first start in Super Rugby, after his previous 16 appearances had been off the bench. This means Jamison Gibson-Park now holds the Hurricanes record for most appearances without starting a match. He was a substitute in all 13 of his matches played in 2016.

Walker-Leawere appeared for the first time in a match this year.

Other try scorers were Wes Goosen (his 28th in Super Rugby), Pasilio Tosi (his first), and Reed Prinsep (captaining the side for the third time) his sixth.

TJ Perenara’s try was the fifth of the eight scored by the Hurricanes and took his tally in 143 matches to 58. He is now just two short of equalling the all-time Super Rugby record of 60 which is held by the former Waratahs player Israel Folau. Currently Perenara sits in third-equal place with Caleb Ralph and fellow Hurricane Julian Savea (if his two penalty tries are included in his total) and behind Doug Howlett who touched down 59 times.

It was Perenara’s try which brought up exactly 10,000 points for the Hurricanes.

During both matches between the Hurricanes and Moana Pasifika, just one penalty goal was attempted. That was in this match, by Ruben Love, and it was successful.

With 11 points from four conversions and a penalty, Love had his most productive match to date.

The two tries scored for Moana Pasifika by Mike Curry and Alex McRobbie, took the overall number of tries conceded by the Hurricanes in all Super Rugby matches to 998.

The Hurricanes have now lost their last four matches against the Crusaders, and 10 of their last 11 encounters.

Of the 43 matches which have been played between the two sides, the Hurricanes have won 13, the Crusaders 28, and two have been drawn.

For the first time after leading a match at halftime against the Crusaders, the Hurricanes have lost. This was the ninth occasion they have been ahead at the break.

In the 136 matches which the Hurricanes have played at Westpac/Sky Stadium, they have conceded exactly 3000 points made up of 349 tries (including three 7-point penalty tries), 257 conversions, 239 penalties and six drop goals. They are just 16 points shy of bringing up 4000 points at the same venue.

This was the seventh time the Hurricanes have lost a match by three points. The last occasion was also against the Crusaders, at Wellington, on 11 April 2021 when the score was 27-30.

Debutant Te Kamaka Howden started the match at Flanker to become the 47th different player to start in that position for the Hurricanes. He is the sixth born this century to play for the franchise.

The other debutant, Pasilio Tosi, went on as a replacement.

The two debutants took the total number to have made an appearance in 2022 to 41 thereby equalling the Hurricanes record set in 2019 for the most players to appear during a season. The Hurricanes played 18 matches in 2019: they have only played six so far this year.

Du’Plessis scored his fifth try in Super Rugby and his first against the Crusaders. It was significant in that it was the 100th scored by the Hurricanes against that franchise.

The other try scorer was Josh Moorby who now has two to his name, from three matches. Moorby, who hadmade his debut two matches earlier on the Wing, started this match at Fullback, the 23rd to do so in this position for the Hurricanes.

James O’Reilly made his first-ever start for the Hurricanes. He had made his debut against the Crusaders at Wellington on 15 July 2017 and in his 15 previous appearances had always gone on as a replacement. He is the 17th different player to start a match at Hooker.

With Props Tyrel Lomax and Pouri Rakete-Stones, O’Reilly provided the 83rd different front row starting combination for the Hurricanes and the third in the six matches played this year.

Now O’Reilly has actually started a match, Tevita Mafileo is the sole holder of the Hurricanes record for most appearances (16) without a start.

Jordie Barrett’s 11 points in the match took him past the 550 mark. After 78 matches he has now scored 560 Super Rugby points. Exactly 250 of those points have been scored in Super Rugby matches at the Westpac/ Sky Stadium. A further 11 points can be added to both totals if the Hurricanes match against the British & Irish Lions in 2017 is taken into consideration.

So far this season Barrett has made 27 attempts at goal and been successful with 19 of them. Amazingly four of his eight unsuccessful attempts have hit the upright: two penalties and two conversions (10 points) with one of those conversions being in this match against the Crusaders. As it transpired the miss, the only one of his five attempts during the match, had no bearing on the final outcome.

The four try scorers for the Crusaders had all scored at least once previously against the Hurricanes. Ethan Blackadder, Will Jordan and Quinten Strange had all scored the once whilst George Bridge had scored five times including a double when the two sides last met at Wellington in 2021.

The lead changed seven times during the course of the match with both teams being no more than four points ahead at any time.

Aisle be Back: Super Rugby kicking off this weekend