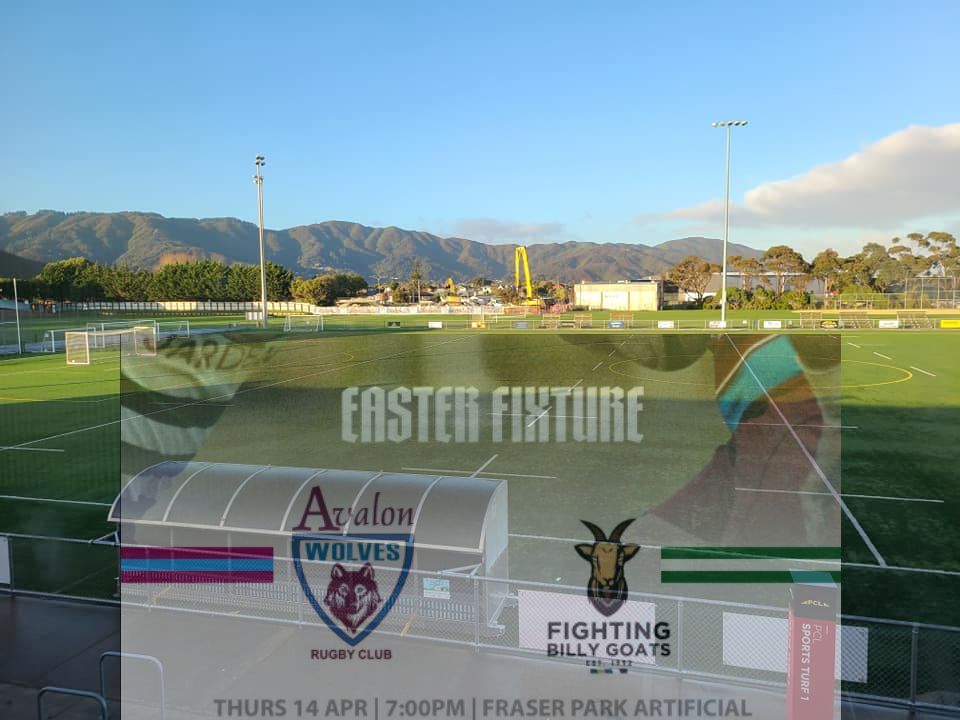 Players in four teams will be thinking of rugby balls not Easter eggs tonight, with two third round matches being brought forward from Saturday to take place this evening.

The two fixtures are in the Swindale Shield and Rebecca Liua’ana Trophy.

In the men’s Swindale, the Avalon Wolves host the Old Boys University Billygoats at the Fraser Park Artificial at 7.00pm.

In the women’s competition, Northern United and Poneke meet at Jerry Collins Stadium in Porirua at 7.00pm.

Home team Avalon will be keen to secure their first Swindale win of 2022, while the Goats have won one and lost one and are eyeing up their third consecutive opposition from the Hutt Valley to start the year. Both teams have at least a couple more players in their line-ups on debut, while OBU have the services of Blues flanker Taine Plumtree who has been named at blindside flanker. Centre Te Wehi Wright is a late Covid scratching, delaying his 100th Premier appearance for another day.

The rest of the round is scheduled to be played as per normal at 11.30am (women’s) and 2.45pm (men’s) on Saturday – more details in our usual Friday content tomorrow.

There is also an inter-school fixture on Friday at 1.00pm between host school St Pat’s Silverstream and Feilding High School, with their second XVs also scheduled to meet. The third round of Manawatu Senior A club rugby is also on Friday, with scheduled matches between Old Boys Marist and Feilding,  Kia Toa and Te Kawau and College Old Boys and Freyberg. Varsity has the bye.

In the meantime, here is a look at some of notable Easter weekend club rugby fixtures from the Today in History files from the past two decades or so:

2003: The season is already a month old in this mid-April Easter round and Poneke maintains their unbeaten record with a four tries to one victory over Upper Hutt. Lock Conrad Pau’u scores two tries in the forwards-dominated win. Ories maintain second place after dispatching winless Tawa 47-18, with NZ Sevens flanker Tafai Ioasa crossing for two tries. Petone halfback Cam Incledon, Norths No. 8 Laki Vitale and MSP fullback Trent Eagle also all score two tries each in their team’s wins.

2004: Two close second round matches in the Hutt Valley. At Maidstone Park, fullback Cory Jane scores two tries for Upper Hutt as they hold off Western Suburbs 29-23 in a tight affair that is only sealed in the 77th minute with a try to flanker Nathan Russell. At Fraser Park, HOBM halfback Piri Weepu leads his side to a 28-23 win over Avalon who have the services of Scott and Thomas Waldrom. Staying on the All Blacks or soon-to-be internationals theme, centre Conrad Smith slashes in for a hat-trick for Old Boys University against Johnsonville in a 40-point win.

2006: After losing at the death last week to HOBM, defending Swindale Shield champions Upper Hutt find themselves on the wrong side of a high scoring thriller, going down to Tawa 30-34 at Maidstone Park. Trailing 0-22 after 30 minutes of play and then 7-27 soon after the break, Upper Hutt mount a comeback and threaten to snatch victory. Tawa hold on for their first win. Playmaking first five-eighth Malasio Mailo and right wing Vice Saletele each score two tries for Tawa.

2007: Newly promoted Wainuiomata stun reigning champions Northern United 30-29 at William Jones Park. With All Black Piri Weepu (see 2004 above) playing a leading hand at first five-eighth, Wainuiomata leap to an early lead and hold on for the rest of the match.

2009: It is a Holy Saturday for Marist St Pat’s left wing Brendan Watt who crosses for five tries. Watt scores five in his team’s 55-3 win over Tawa at Evans Bay Park. Elsewhere, Charlie Ngatai strikes for four tries in Poneke’s 76-0 rout of Old Boys University across the road at Kilbirnie Park.

2015: An exciting third round clash at the Polo Ground today sees Ories come back from 13-0 down to beat Old Boys University. After conceding early points, Ories hit back to lead 21-16 by halftime as the match is running at almost a point a minute. The scoring by both sides continues but eventually settles down and Ories end the match holding on for a 38-27 win. In nearby Kilbirnie, Marist St Pat’s retain the Horan-Millar Trophy with a tough 23-10 win over Poneke.

2017: Wainuiomata scores a try in the shadows of fulltime to give them a 27-24 win over the Upper Hutt Rams in their Peter Jones/Dave Ritchie Cup fixture. The Rams were leading 21-5 at halftime, on the back of tries to flankers Dan Schrijvers and Mitchell Markov (2), but Wainuiomata hits back hard. The Rams still lead 24-22 late with fulltime fast approaching, but can’t prevent the winning try, to mark prop Justin Va’a’s 150th match for Wainuiomata.

2019: The Upper Hutt Rams’ prayers are answered when they break a 27-game duck in Wellington Premier rugby by beating Marist St Pat’s 26-25. In windy conditions, the Rams come back in the last few minutes to seal an unlikely victory. Trailing 15-26, the Rams work their way up field and attack the scoreboard corner through a lineout and left wing Soli Malatai skirts around to score a bonus try. First five-eighth Tyler Tane then judges the sideline conversion perfectly in the crosswind to cut the home side’s lead to 25-23 with barely a minute to play. From the kick-off, the Rams work their way up field one final time and are awarded a breakdown penalty 40 metres out dead in front of the poles. Tane, a former MSP player, steps up and bangs the penalty over to give his side their first Premier victory over MSP since 2002.