Skip to content
You are here
Home > Club Rugby > Pioneers of rugby in Wellington: 007 Tom Ellison and Davy Gage 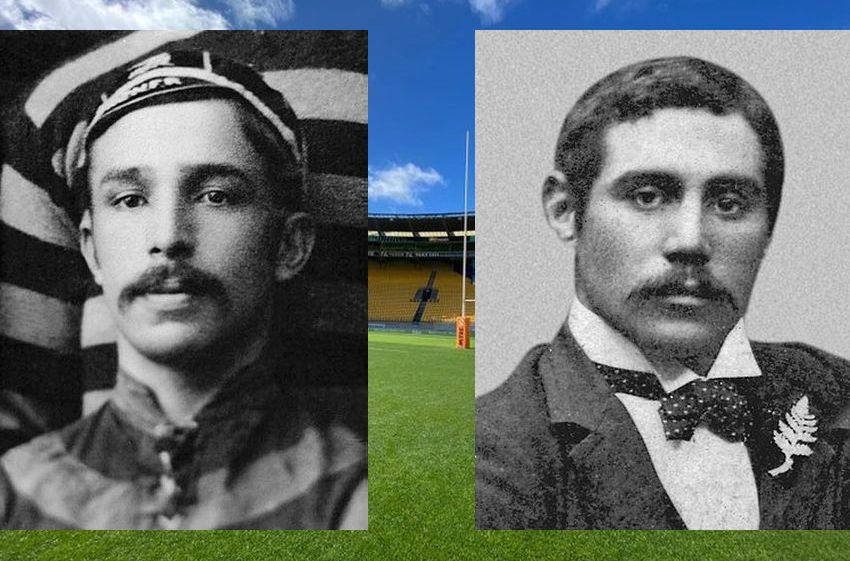 Tom Ellison (left) and Davy Gage. Both left their marks on rugby in Wellington and both died young.

Ellison and Gage were great friends and played in the same teams together – for Te Aute College, Poneke, Wellington and New Zealand – and for the first New Zealand Native team that toured Great Britain, Australia and internally throughout New Zealand and played 107 games on a 14-month tour in 1888-89.

Ellison was an inside back who invented a whole new position for himself and teammates– the wing forward – and Gage was renowned as being able and willing to play anywhere in the backs and won many games playing from halfback to fullback.

Thomas Rangiwahia Ellison was a man of several firsts in New Zealand rugby.

He introduced the wing forward position to his Poneke and then Wellington teammates. He captained and coached the very first New Zealand rugby team, that toured New South Wales in 1893. He wrote one of the first rugby books, The Art of Rugby Football, and in 1893 at the ingaurgal NZRU meeting he proposed a uniform consisting of a black jersey with a silver fern, white knickerbockers (changed to black shorts in 1901) and black stockings. He was also a lawyer, becoming one of the first Maori people to be admitted to the bar in 1902, and was an advocate for players to be reimbursed for lost earnings while playing rugby.

The wing forward position he introduced changed New Zealand’s style of play and was dominant for 30 years. Arthur Swan in History of Rugby Football in New Zealand carries this extract by Ellison himself on the position:

After finishing school, Ellison moved to Wellington and joined Poneke in 1885. Poneke played in the Junior Championship at the time but won all their matches that season and were promoted to the Senior Championship. They went on to win a four-peat of Senior titles between 1886-1889.

Ellison first played for Wellington in 1885 and was a provincial team regular until 1892. He played 23 matches for Wellington, most at halfback.

He led the New Zealand team to Australia in 1893, playing in seven matches. He played 68 first-class matches in his career that was cut short because of a persistent knee injury.

Ellison was also one of the first Wellington residents to own a motor car, which he used to commute from his home at Eastbourne to his city office.

He and wife Ethel May Howell had three children, two of whom died in infancy. Tragically, Ellison himself became ill in September 1904 and died the following month.

It was Ellison who brought Davy Gage to Wellington and to Poneke, as this extract from Gage’s obituary in the New Zealand Freelance on 20 October 1916 describes:

Gage was the son of Captain Gage who fought in the Land Wars and was an assessor of the Native Land Court in the nineteenth century. He was born in the Waikato before attending Te Aute College on a scholarship.

On the New Zealand Native tour that followed, Gage made 68 appearances in 74 matches of the Great Britain leg. This team was travelling and playing up to three times a week.

On this tour, Gage met and fell in love with the granddaughter of a Scottish Earl. He was unable to pursue the relationship and returned home a single man. But he went on to father six children in New Zealand with a different lass.

After bypassing the homeward Australian leg of the tour on account of an ill relative in New Zealand, Gage soon returned to Wellington, linked up with Poneke and played for Wellington in 1889, after helping Poneke win its fourth straight Senior Championship title.

In 1890 the WRFU judged Gage ineligible to play for Wellington [unsure why]. Poneke responded by withdrawing from the Wellington Senior Championship. This weakened the competition considerably, given that Poneke were four-time defending champions.

Gage also played For New Zealand in eight matches in 1893 and 1896. He toured Australia in 1893 in the team captained by Ellison and was captain for New Zealand against Queensland in their one-off international at Athletic Park in 1896, won by the home side 9-0. Of note, just three days earlier Wellington had beaten Queensland 49-7. This was a whopping score in those days. Gage scored one of 14 tries.

Gage continued to play first-class rugby until 1901, which included a season each with Hawke’s Bay and Auckland in 1895. He played for Auckland against Wellington in a famous match at Newtown Park that year, won 9-5 by Wellington. He played in 131 first-class matches in his career.